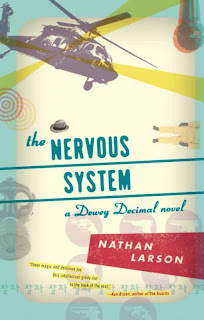 Sometimes, I don't trust my own tastes. Take Nathan Larson's second installment in his Dewey Decibel series, The Nervous System. A while back, I reviewed Larson's debut, The Dewey Decibel System. Though in retrospect my school was probably lower than it should have been, I found the novel to be a flawed debut. But I liked a lot about the novel, particularly Larson's reimagining of noir/hardboiled tropes and the starkly realistic dystopian setting he created.

So when I received my copy of The Nervous System I was fairly excited. OK, that's not true. I received the second book before buying the first. And I received it nearly six months ago. A little thing called a dissertation got in the way.

But I finally got around to reading Larson's second installment in the Decibel series. And I liked it. Or at least I think I liked. I liked it.

Much of what I enjoyed about the first novel I enjoyed about the second. Larson sets his story in a near-future New York City, which is largely a ghost town following a series of devastating terrorist attacks, subsequent financial collapse, and a superflu epidemic. Asian and Eastern European mobs, shady construction firms, and security contractors populate the rotting city, taking advantage of misery and catastrophe as vultures tend to do. This dystopian setting isn't a precautionary allegory à la 1984, but rather a frighteningly spot-on assessment of where we'll probably end up in a few years. Granted, Larson can be criticized for drawing too much from contemporary hysteria, taking a bit of every ballyhooed threat-of-the-week to craft a really shitty future for us. But, as a news junkie and committed pessamist, I didn't mind it so much.

Quick plot summary: Senators Herman Cain and Sarah Palin got married and led the Tea Partyers to power. Or at least their future power-couple facsimiles of them did. Dewey, cleaning up the mess he made in The Dewey Decibel System, stumbles upon some nasty informationrelating to husband. Next thing he knows, our hero has to deal with Korean-Chinese mobsters and a nasty private security corporation as he generally stumbles through it all, killing and kidnapping along the way.

What I did mind is the voice of the novel's narrator. Dewey Decibel has, undoubtedly, a unique voice, mixing '90s hip hop slang and militaryspeak within an erudite, vaguely Southern cadence. For the most part, Dewey's peculiar way of speaking isn't intolerable, not entirely. Maybe too cute, maybe too unrealistic, but generally tolerable. However, numerous phrases and phrasings caused me to stop reading to take a moment to roll my eyes, sometimes cringe. Larson's style is particularly troublesome at the outset of the novel, slowing down the reading. At about page 20, I was a bit worried, worried because I wanted so dearly to love this novel. But I settled in, I got used to Dewey's voice, and I enjoyed the book.

Part of the reason I liked The Nervous System is that Larson pays due respect to the noir/hardboiled tradition without trying to recreate The Killer Inside Me or The Big Sleep. Like The Dewey Decibel System, the plot of The Nervous System is straightforward, to some extent even simple. Just like a good crime novel. I don't need a complex conspiracy unfolding over 600 tedious pages, just the barest justification for murder and mayhem in 250. In a nod to the hardboiled heroics, Dewey Decimal is a violent man with an intransigent and abiding sense of justice. Larson, quite smartly, did not write his hero as a PI. (I'm not sure that PIs still exist in the real world, but I certainly can't see how they'd find employment in Dewey's New York.) Nevertheless, his war is private. And there's a well-placed twist of sorts, as any good crime story need. (Just one, maybe two. Don't get too smart on us.)

Even Dewey's lingo -- or rather his incessant usage of lingo -- is a nod to hardboiled fiction. Again, Larson gets kudos for not simply reproducing the style of old. For whatever reason (a lack of critical insight or originality?), contemporary authors feel compelled to mimic Spillane and Thompson stark and often trite dialog, resulting in their characters sounding ridiculously out of date, if not simply ridiculous. Larson doesn't always manage to avoid ridiculousness, but at least he's trying to do something new with a well-worn form.

And thus far, he's been pretty successful. Now up the ante for number three.

Bonuses: +1 for dystopia; +1 for respect without mimicry; +1 for having Sarah Palin and Herman Cain marry

Penalties: -1 for Dewey's voice; -1 for a fairly flat female lead