San Diego Comic Con is only one week away and you can already feel the anxiety and the excitement.  It seems like the off-site events are getting bigger and bigger each year and with the complete takeover of Petco Park this year is setting a new standard.  The Nerd HQ, Walking Dead Escape, and others are taking over the ballpark as rabid fans compete for swag.  I am really looking forward to immersing myself once again among the thousands, but before I can make my annual trip to San Diego we have some books to check out. 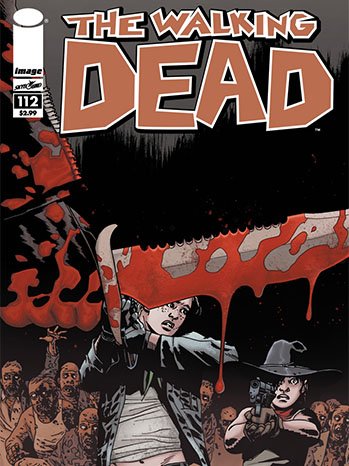 Pick of the Week:
The Walking Dead #112 - The fact that Robert Kirkman is able to keep this book fresh after over 100 issues is a testament to the power of this series and the success it has had.  In the last issue Negan surprised the survivors with a visit while Rick was out gathering supplies before attempting the overthrow.  When Rick discovers that Negan is in his territory early and has killed one of his men he is ready to deliver the final blow to Negan.  The twists and turns that have been an integral part of this title for 112 issues will always keep me coming back for more.  Can't wait for the 10th anniversary panel at Comic Con!

The Rest:
Hawkeye #12 - After the lighthearted adventures of pizza dog, we are treating to a moving story about Clint and his brother Barney.  I can't think of another book that feels as real as this title.  Simple and powerful issue that highlights why this book should win an Eisner. Matt Fraction's writing and ability to portray Hawkeye as real person and capture so much real emotion on the page of a comic book is astounding.

Batman #22 - Scott Snyder has really stepped up his game with Zero Year.  In part 2 of the new arc, Batman becomes aware of the corruption of Wayne Enterprise and just how far of a reach the Red Hood has.  The Red Hood is always steps ahead of the Dark Knight and the rumblings of the Riddler are quite enjoyable.  Loved the end of the issue, but the highlight was the creative use of a game board panel on a conversation between Bruce Wayne and Edward Nygma.

Daredevil #28 - Mark Waid's run on Daredevil continues to impress.  In an issue devoid of action, Matt Murdock is reunited with a foe from his childhood who needs legal help.  Murdock agrees to take the case and is now entangled in a new web involving the Sons of the Serpent, a racist hate group.  Add that to Foggy's cancer and things aren't looking too good for the man with no fear.

Helheim #5 - Cullen Bunn's latest title continues to deliver the goods.  The fear the witches feel in this issue is clear as they prepare to deal with the wrath of the Draugr.  Rickard's father maintains his relationship with his former son, the Draugr, knowing that once the witches are defeated he must kill the beast that was formally his son.
Posted by Mikey N at 4:00:00 AM