I'll spare you the boo-hooing. If you're trolling the various #sdcc tags on Tumblr like me, you've had it up to here with the drama of a million geek girls virtually howling to a geek moon. SDCC 2013 is so packed with hot dudes in nerdy shows and geeky reboos, the fanfiction practically writes itself. I will try to contain myself.

Sure, it'd have been totally awesome to have run into a scrawny dude in a Bart Simpson mask only to later realize I missed my chance at running away with The Doctor (or at least copping a feel), but I think I'm having more fun experiencing the San Diego Comic Con from the comfort of my own iPhone. There are no lines, the photos make it look like everyone is dressed up instead of just the hardcore geeks, and I get the pleasure of immediate gif-gratification for every priceless moment.


FIREFLY ONLINE
No, I will not let go of Firefly; you can pry this orange hat out of my cold, dead hands... after I relapse into a MMORPG coma when Firefly Online is released next summer. It's not much of a trailer, but it still gets my blood pumping.


KORRA: BOOK TWO
If you haven't watched The Legend of Korra yet, you're seriously missing out. Not all of the episodes are available on nick.com, so do yourself the favor of torrenting Book One (the first season). Check out how sweet Book Two looks! I can hardly wait until September.


(Remember that time I went to the Mall of America to ride the Avatar rollercoaster?!)


MARVEL v. DC MOVIES
... Ready.... Fight!
I think I'm obligated to state that it's been confirmed that Batman will appear in the Man of Steel sequel, and that seems pretty cool, I guess. But the announcement that The Avengers sequel will be subtitled Age of Ultron and that Karen Gillam (Amy Pond on Doctor Who) shaved her freaking head for a role as a bad guy in Guardians of the Galaxy is even cooler. 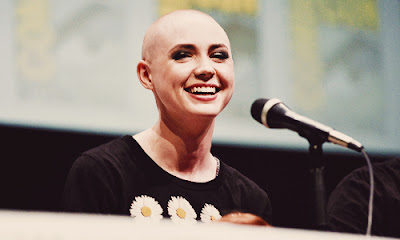 
VIKINGS
I'm not even sure if they did anything but show up to SDCC, but this dude (Travis Fimmel) and this chick (Katheryn Winnick) are two of the hottest people on TV and I was happy to see them. 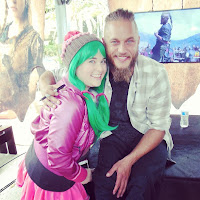 And while we're on Next Gen, here's another fangirl aneurysm/the sandwich I want in on: James McEvoy & Patrick Stewart And, bestill my heart, Nathan Fillion and Matt Smith, together at last THE BEST COSPLAY EVER
No, really, EVARRRRRR

But nobody ain't got nothing on the best cosplay ever, Tom Hiddleston as Loki IRL--