Or, How the Mighty Have Fallen 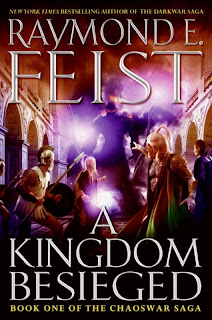 We've all had the experience—some book or movie a younger version of ourselves encountered long ago, some nerdy pleasure forever wrapped in the soft glow of our childhood, inseparable from the sense of wonder with the world we felt so strongly in those days.  For me, one such movie was Willow, a story my rational mind could recognize, even at the time, as a trite rip-off of Lord of the Rings but one with which I emotionally felt permanently bonded (Madmartigan, objectively, is way cooler than Aragorn, after all).  Among books, the series of Midkemia (and Kelewan) novels written by Raymond E. Feist holds that special place in my heart.  What a magical origin story in Magician! What exciting later adventures awaited Pug and Tomas! I treasured these books so much as a child that in a weird way they almost became part of my identity.

And that's why, when I read Feist's most recent Midkemia novel, or as I like to think of it, The Book Which Shall Not Be Named, I found myself in the midst of a full-blown, cold-sweats, can't-fall-asleep-out-of-terror, existential crisis.  How can he who created something so amazing just a couple decades ago be the very same entity who vomited up 400 pages of drivel in 2011? Have the pod people seized control of his body, forcing his listless hands and dead, lifeless eyes to keep working in a cruel parody of the craft of writing?

I imagine how I felt, on reading You Know What, would be akin to the bitter disappointment an avid basketball fan, having seen Michael Jordan in his glorious prime, might feel if he saw Jordan totter onto the court as an octogenarian and wheeze out a few half-hearted layups.  It's not mere horror—it's almost a personal betrayal, since if Feist (or Jordan) is capable of such an awful performance now, the signs of his badness must have been there in his earlier efforts too, right? Which means I must have been an idiot as a child to admire his writing style and world-building skills!  But perhaps I have it the wrong way around: Feist really is—or rather, was—capable of greatness, and simply has fallen on hard times creatively, stylistically, structurally, etc.  After all, barring the alien mind control theory, the same Ridley Scott who spawned the infuriatingly incoherent Prometheus and the appalling Robin Hood also managed Alien and Blade Runner in better times.

And just like Scott's early versus recent work, Feist's books, old and new, all have much the same elements (powerful heroes of various skill sets—Pug the magician, Jimmy the Hand or descendants as thief/spy, Condoin guys as leaders, etc., pitted against demonic multiworld/dimensional threats) which, in a clever configuration, can produce a masterpiece like Magician (or Alien)...but in a slapdash arrangement fizzle out as Talon of the Silver Hawk (or Prometheus).  The once-great author/auteur, in his befuddled mind, uses all the same pieces, but has lost the ability to put the puzzle together, and now lacks the creativity to go beyond the world he made years ago and dream new dreams.

Weep for Feist—how far he has fallen! How sloppy his writing has become, how formulaic his plots, how uninteresting his characters. My theory? Blame video games. He stopped writing full-time so he could help create several games based on the Midkemia world(s), notably Betrayal at Krondor (excellent) among many others (most of which were utterly forgettable/bad). Unsurprising, given this context, that he a) devotes far less time to the craft of writing new novels, b) creatively he's permanently stuck in Midkemia revisiting old characters and their far less interesting children and grandchildren, etc., and c) has written less a novel and more a novelization of a game concept: generic characters no reader would identify with who are exposed to a range of uninspired role playing-esque encounters.  One can almost hear the dice tumbling...and d) to make matters still worse, he's suffering from RJS (Robert Jordan Syndrome): this entire book feels like mere build-up for the next book. But I read it to the end--why, you ask? It's not unlike when you're outside taking a walk and suddenly you get hit by a meteorite: you see the edges of the ghastly wound it's left and you try to look away, but even though you know it's just going to freak you out, you have to look down at that horror, because you have to know how bad the damage is...

TL, DR: This book is horrible. Shame on you, Raymond Feist, for cashing in on Midkemia once again, and thereby cheapening what Midkemia used to be.  But most of all, shame on me, who keeps reading your books out of nostalgic loyalty to your once-great legacy.

Bonuses: I award you no bonuses...and may God have mercy on your soul

Penalties: -1 for returning yet again to Midkemia and making it suck, -1 for shattering my childhood illusions with a combination of terrible, formulaic writing, recycled plots and characters, and RJS

Nerd Coefficient: 1/10 Crime against humanity (and disillusioned former lovers of Midkemia in particular)

[This book enjoys the dubious distinction of being one of the only books, if not the only one, given such a low score by Nerds of a Feather.  For an explanation of why 1/10 is such a rare score, see here.]