As you may or may not know, indie publishing columnist Dean Smith-Richard is also an SF author! As part of the release festivities, he's offering print copies of 3024AD: Short Stories Series One for a pair lucky nerds of a feather! To enter, just add us on facebook or twitter, tweet about the giveaway or tell us what your all-time favorite science fiction novel is in the comments below. And for those who already own the ebook edition, give us the order code you were emailed and you'll get a bonus entry! 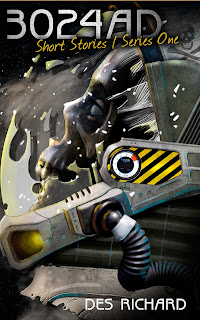 "In the future, humanity is still much itself. The modern world has expanded into outer space, and thousands of businesses and corporations possess planets instead of factories. Slavery is common. Frontier planets, barely livable, are worked only by the bravest. Titan Station, once mankind's greatest achievement, orbits Jupiter, abandoned to gangsters. New York City is a commonly known archaeological dig. The conquered universe is a political powder-keg, ready to explode on dozens of stations and planets. Meanwhile, Badger chases freedom. Magdalena Aznar chases ideals. Sabrina Trent chases the past. Digger is simply an anomaly."

3024AD: Short Stories Series One is a collection of short stories that intertwine and overlap, sharing characters and events. It sets the stage for a large universe, filled with adventure and danger.

It is available in e-format on Kindle, Kobo & Nook, and now in paperback. You can win a copy of the paperback right here!

This giveaway is open to anyone with a US or Canadian shipping address. The giveaway ends at 11:59pm PT on July 10, 2013. We will announce the winner later that day.