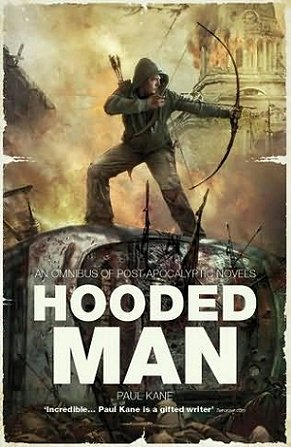 So, one review on here recently touched on the positives of book reviewing and I agree with those. However, Hooded Man by Paul Kane raises in my mind most of the negatives. In reading in order to review, I dragged myself far further through this series of three novels than I ever would have as a casual reader, even one who had paid for the books. And I also kept my interest heightened by regularly looking for good aspects of the stories in fair rebellion against my gut feeling that I just didn't enjoy reading them.

The concept is pretty fun, and for a while Kane does a good job of balancing the serious and the jokey in his vision of a post-apocalyptic Robin Hood. Robert gradually becomes a leader and fighter that strongly resembles, through both coincidence and design, the medieval legend. He uses a bow and arrow. He has a girlfriend called Marian, I mean, Mary. He has a hood. He lives in Sherwood Forest. He fights an evil 'sheriff' (a Frenchman called De Falaise) based in Nottingham castle. Etc.

Some aspects are well rendered. The sorrow Robert feels over losing his family, and how grief even more than anarchy is the abiding result of the virus that killed most of humanity, are convincing and bring a depth to events. The inter-relationships between characters get space to breathe and most are given respect and emotional range. The action is often inventive and unpredictable.

The chief issue is not in the tale, which is largely entertaining - the kind of tale that people who take paintball a bit too seriously would love...

...but in the telling. The books are just too long. Why would anyone want something giving pleasure to be shorter (Oscar Wilde never asked) ? Well, because it grates, and dilutes the power of the story. He can't avoid embellishing his meanings, adding to his details, rounding out moments, which, in my learned, never-actually-written-a-book-myself opinion, makes for a more labourious read than the kinetic, fast-flowing action deserves. He feels a constant need to reiterate points :
And a recurring dream sequence of Robert and De Falaise in a climatic confrontation, over and over, is like a bad trailer. "Who would win, who would lose? It was a question that soon would be answered..." Thanks for that. Nice way to build the tension.

And one more thing; Sherwood Forest is tiny these days. Tiny. In American terms, it's a small thicket. So why doesn't the bad guy just napalm it? When the good guys get hold of a helicopter and yet the huge evil army that has raided army bases has nothing, it just strains belief too far. It's like he thought as he wrote, 'Oh yeah they could use a helicopter, that'd be a twist', and thought nothing else. Although if he had he would have put in a paragraph slowly explaining it all.

Anyway, as you can tell, I wasn't really buying the first of the trilogy. But onwards I read, partially out of duty, partially because it was mindless easy reading to while away some long days on vacation when something more intense or complex felt like hard work. But also because I hoped the story would begin to expand and lose the trappings of the Hood legend and become its own beast.

Well, the next two tales do expand, in a way. The villains are from further afield and grander in their plans. More and more characters are added to the mix (which leaves Robert actually reduced to just another player, and I'd have preferred him to be the sole protagonist). The simple mix of post-outbreak sci-fi and myth homage is broadened to include mysticism and mild fantasy elements. There is even a American native indian bad guy who has visions. So an interesting enough world. But the writing just fails to inspire, to rise above the fan fiction way it sounds. And the violence becomes repetitive and gratuitous. When the bad guys do it, it serves to show how evil they are. When the good guys do it, it shows how brave and righteous they are. Boring and morally backward, like a Steven Seagal film.

In the end, I decided to stop reading a third of the way into the last book, as giving up on it is what I would have done if not reviewing and the best review you can have of Hooded Man is one that says don't bother. Like substandard candy, it is fun for a bit but after a while loses its flavour and just needs spitting out. Sorry.

Bonuses: +1 for a genuinely enjoyable idea, and a good beginning, which builds the idea up gradually.

Penalties: -1 for failing to capitalise on it, instead trotting out villain-of-the-week scenarios; -1 for annoying, frequent dream sequences; -1 for putting that Brian Adams song in my head