It's a bit slow for games this time of year, so I've decided to look back on one of the best titles of this generation, Valve's Portal 2. As many of you may remember, Portal was part of the Orange Box, a collection of five games from Valve including Team Fortress 2, Half-Life 2, Half Life 2: Episode One, and Half-Life 2 Episode Two, along with the aforementioned Portal. Portal was a short 2-3 hour trial at a puzzle game that the good people at Valve had been tinkering with and decided to include in the "Best deal in gaming of this generation." It received many unexpected game of the year awards. In order to complete the puzzles, you were tasked with using a "portal gun" to reach the exit of each room by using the gun and the environment to bypass a series of obstacles and reach the next puzzle. The portal gun shoots a blue portal and an orange portal. When you walk through one, you exit the other. Simple, right? Where it gets more complicated is when you have to use things like momentum to complete the puzzle. If you jump from 40 feet up into a portal, you come out with the same momentum with which you entered. It was a cute yet challenging game with a classic credit track (hit play below). 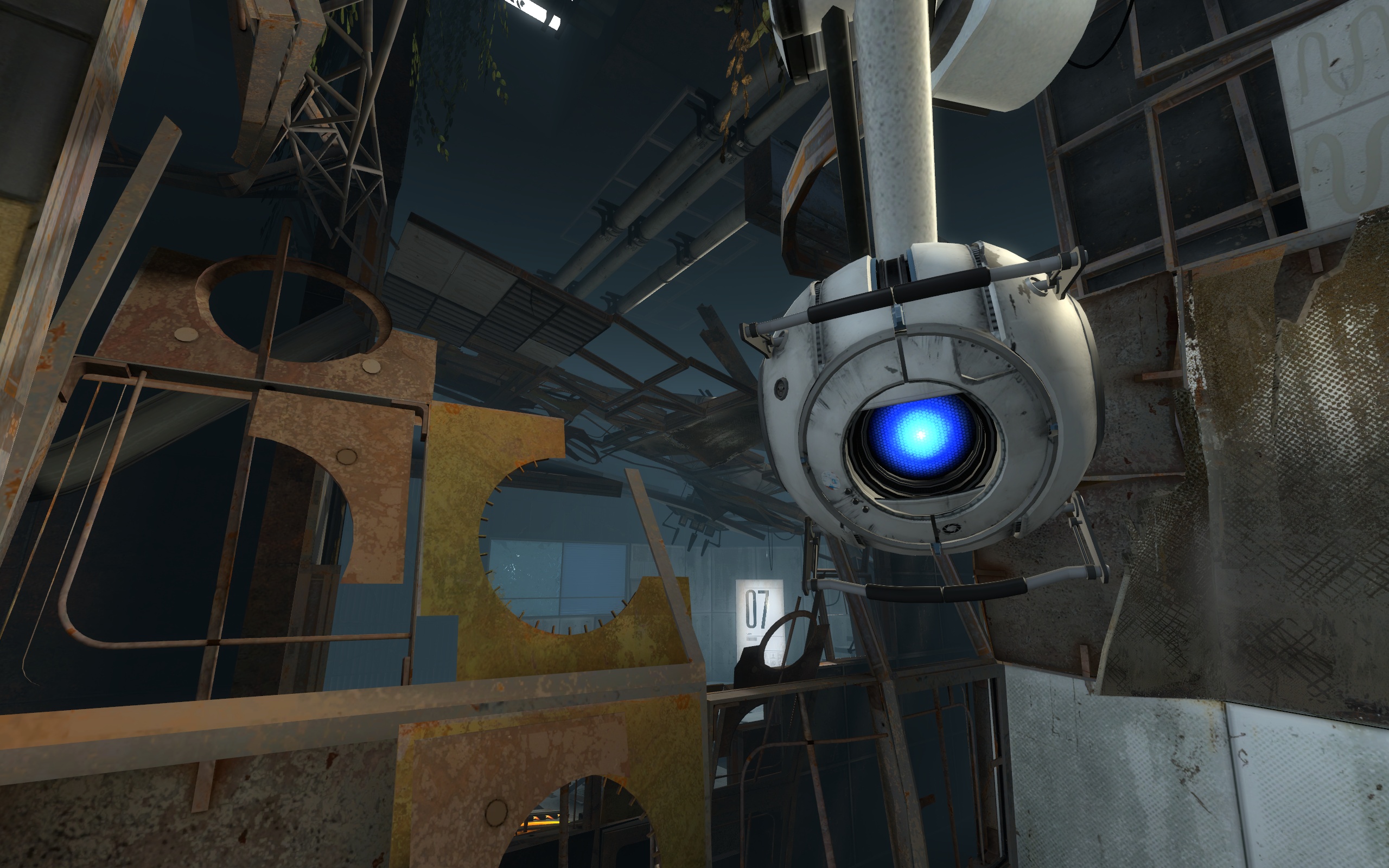 Portal 2 was described by the programmers as their real intention with Portal. It's a full 10+ hours of gameplay that continues within the universe begun in Portal. In the first iteration, you are facing a female testing program named GLaDOS (Gladys). Those of you who have been around computers as long as I have will get the reference to the DOS programming language, an early way to run computers. In the second Portal, you face GLaDOS again, but you have a small round robot on your side named Wheatley. Some of the best humor in the game comes from this little British bugger, oddly reminiscent of Ricky Gervais, who can't seem to do anything right.

Since this game came out in 2011, I'm going to assume that you've either already played it or don't intend to, so spoilers are open for business. After disabling all of GLaDOS' defense mechanisms including the turrets and neurotoxins, you replace GLaDOS with Wheatley, fully expecting the (up-until-now) friendly robot to help you escape the testing facility. Instead, the little brat goes mad with power, places GLaDOS into a potato, and throws you both down an elevator shaft. The rest of the game is made up of you and GLaDOS making your way through old testing facilities that date back to the 50s in order to finally return and face Wheatley in the hopes that GLaDOS will keep her word this time and free you. As you progress through the older tests, you are joined by narrator J. K. Simmons who voices the CEO of Aperture Science. Fans of the Half-Life series will recognize the company as the one that brought about the subjugation of mankind, but that's a story for another game. In this one, Aperture has already collapsed and you're working your way through their old testing chambers, along with GLaDOS the potato.

The older testing chambers were perfect. They felt like a throwback compared to those in Portal 1 and the early levels of this game. The surrounding environment and Simmons' narration serve to complete the illusion that you are, indeed, back in Aperture's old 1950s test chambers. It takes some doing, but you eventually thwart Wheatley's attempts to kill you and return to the chamber where he is housed. Using corrupt software, you prompt a second core replacement (the first being the replacement of GLaDOS with Wheatley). However, Wheatley has booby trapped the process and the change of cores brings the entire structure down around you. Only by shooting a portal at the moon are you able to drag the little traitor into space and remove him from the testing facility. GLaDOS grabs you at the last second as Wheatley is dragged through the portal and onto the moon. Luckily for you, GLaDOS has realized that testing you is a useless endeavor and she decides to release you. The game ends as you walk alone into a corn field, accompanied only by your companion cube.

why is it so good?

This is the seventh-best game on the Xbox 360, according to Metacritic.com, with a total score of 95. I think that one of the reasons this game received such high marks is its difference from the norm. Although you carry a gun, it's hardly the AR-15 from Call of Duty, or even the Covenant pistol from Halo. The purpose of this gun isn't to kill, but rather for navigation around massive puzzle rooms. The portal gun is used to manipulate lasers, light bridges, turrets, companion cubes, and most of all, yourself.

This unique take on the "shooter," along with Valve's high-quality writing and seemingly never-ending wit, make this game stand out among its peers. It is a game that simply must be played if you haven't gotten around to it, yet. I had as much or more fun playing it through a second time as I did the first. It was a joy to play, and while I enjoy a nice FPS, none of them bring that sense of childhood wonder that comes with Portal. They also don't have the "Aha!" moments that Portal does when you finally figure out a puzzle. Although it has its fair share of anger-inducing portions where you just can't figure out what you're supposed to do next, the payoff is made even greater by the struggle to complete each test. If you haven't tried Portal or Portal 2 yet, pick up the Orange Box for twenty bucks. It is easily the most bang for your buck of this generation, and you might just discover a new favorite games as I did.

Penalties: -1 for making me want to throw my controller on occasion. As mentioned before, most of these moments were followed shortly by an "Aha!' epiphany that made it worth while, but a few levels took just a bit too long to reach this point of understanding.

Bonuses: +1 for the quality writing. As regular readers will know, I prefer a story-driven game to one that survives only through explosions and non-stop action. This is a single piece of an entire sci-fi universe (including Half-Life and Team Fortress) that take place in Aperture Science's dystopian "science project gone horribly wrong" universe. Once you've played the Half-Life series, this will feel like a spin-off. However, it is entirely capable of standing on its own. That is mostly due to the quality writing. Keep it up, Valve!

Nerd coefficient: 9/10. Very high quality. Standout in its category.
Posted by Unknown at 4:40:00 AM