Until today, I had never been to Comic Con, despite living only a hundred or so miles from the Beast that Annually Devours All of Nerdery.

I arrived at Comic Con 2013 late Thursday night and had the opportunity to hit up a couple of smaller parties. But the convention was already well in the day's rearview mirror, so I wouldn't say it was my first day of Comic Con ever -- that honor was reserved for Friday morning. 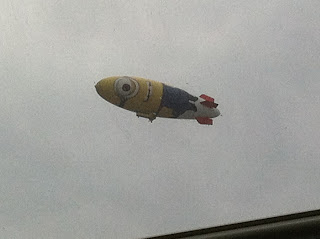 I arrived Friday right as the doors to the Exhibit Hall opened, but I was inexplicably diverted away from them by event staff and made to walk literally the entire circumference of the San Diego Convention Center before being allowed to enter the Exhibit Hall. I was told later that this had something to do with people who had camped out being given first priority. That's fine, I'm not going to complain about a little exercise -- and neither should most Comic Con attendees, if you get my meaning. I then took a leisurely stroll through the sparsely attended Exhibit Hall until around lunch time, bought a lot of great stuff, and started to get into my head that all of the stories we've all heard about the unfathomably massive crowds at Comic Con might just be something of an urban legend.

I attended my first panel -- for Disney Channel's excellent animated show Phineas and Ferb -- and was appropriately impressed. It was a great panel, with the show's two creators, most of its cast, and new information about upcoming P & F endeavors, most impressive of which is to be a Phineas & Ferb/Star Wars crossover special made possible by Disney's acquisition of Lucasfilm, and which sounds amaaaaaaazing. I was really feeling the Comic Con vibe now.

I had a break in my schedule, so I went back down to the Exhibit Hall, and I found things had changed. Dude, there were a LOT of people there now. It was hard to walk around, I got caught in a giant traffic jam at the Walking Dead booth, and my knees were starting to hurt. So I bailed out and hit a couple of off-site events, which were pretty cool, before heading over to Petco Park for my start time in the Walking Dead Escape, where I would run from zombies and leap, crawl, and climb over obstacles for a long-ass time before getting infected by the third-to-last zombie. The freaking THIRD-TO-LAST-ONE. And I'd worked so hard... 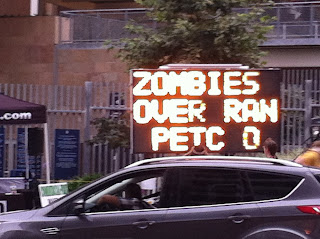 By that time the day was mostly over and I headed back to the Con proper to meet up with some friends and then a couple of off-site screenings and events. My overall impression of the day was that no human being can possibly "do" Comic Con. There's too much. You can spend three days in the Exhibit Hall and barely scratch the surface of the immense independent and entrepreneurial talent assembled in that giant room. You will also barely scratch the surface of the willingness of human beings to stand in long lines for almost literally no purpose whatsoever. Throughout my day, I got updates about a pair of friends who had lined up at 5 am for the notorious Hall H. This is the biggest room at the convention and host to the most high-profile panels. But my friends had to wait in line almost 12 hours just to get into the giant mamma-jamma. I can't fathom a world where this is worth the time invested in it. Joss Whedon answering questions for half a day wouldn't make this a fair trade, in my mind, given all of the fantastic things you'd have to give up for the privilege.

There has been talk of moving the Comic Con to somewhere bigger than the San Diego Convention Center, and I have to admit I don't think this is a solution. There aren't too many places that ARE bigger, for one. And it would just fill up again, anyway. This is a sign that Geek has become the new Mainstream, really. And Comic Con has become more "Culture Con" thank anything else. At this point, think of the largest possible venue you can imagine. Now think of all the human beings who are interested in art, entertainment, culture, and/or girls in tiny costumes. No matter what your answer to the first question, the answer to the second one will always be bigger.

On the whole, this n00b was impressed with the management of the event, and the event itself. Slightly less so with some of the people there who are willing to make very poor trades of their time and opportunities. You'd think we all would've learned from getting picked on in High School...
Posted by vkotrla at 12:21:00 AM