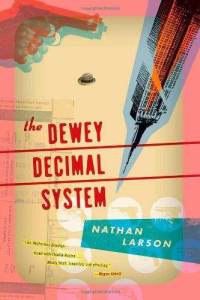 
There are a few ways to approach The Dewey Decimal System. It's partly a very noir crime novel with spy-ish elements, partly a work of critical speculative fiction. It's definitely reads like the effort of a debutante novelist, specifically Nathan Larson, better known as a film composer and lead guitarist of seminal post-hardcore band, Shudder to Think.

The Dewey Decimal System is the story of a man called Dewey Decimal -- which is not surprisingly a nom de guerre. Dewey is a hired goon with a shady past, working for the New York D.A.'s office, contracted to kill the boss of a Ukrainian construction outfit who is causing the city some headaches. Once the Ukrainian’s wife comes into the picture, Decimal enters into a world of scheming mobsters, war criminals, and underworld relic hunters.

Though set in the near future, Decimal’s New York City is not some futurist ideal. The city is a shell of its former self, devastated by terrorist attacks, financial collapse, and a super-flu epidemic. Though the plot does, interestingly, draw upon the Balkan Conflicts and international intrigue, this is not a spy story: the novel's international agents are little more than criminal thugs, much like real spies. The plot is pretty straight up noir, and told that way. Of course, The Decimal System does not overplay these influences. Larson's storytelling skillfully avoids many of the cliches of hardboiled writing, choosing a more lighthearted tone for his protagonist. Nathan Larson’s plot is furthermore grounded in current circumstances: terrorism; the end of oil; deficits; matters of national security, both real and imagined.

Larson writes Dewey Decimal more in the vein of a Jim Thompson protagonist rather than Chandler’s Marlowe. Think Kid Collins rather than Lou Ford. Decimal is a deeply troubled individual, the product of a broken home, military experiments, and most likely some severe chemical imbalances. In the hands of a storyteller like Thompson, such a protagonist can provide the reader with an unsettling experience. But Larson develops Dewey's mental imbalance more gingerly, providing some levity to the novel. At times, however, Larson goes a bit too far, making Dewey into a childish character. At times. Perhaps this characterization is intentional. Maybe Dewey Decimal is an idiot savant killer, a rain man with black ops training.

At times, Larson's writing and containerization suffer from too-cuteness. Dewey Decimal's name alone signals this cuteness. From his cliched grab-bag of ticks and compulsions to his dated use of slang, Larson's Decimal can irritate at times. Not so much that I was unable to enjoy the novel, but enough for me to notice.

But The Dewey Decimal System isn't a standalone novel. It's the first of a series of Dewey Decimal tales. As such, it is successful. Larson smartly leaves much of Dewey's world unexplored. His near-future New York serves as little more than a setting in The Dewey Decimal System, but will undoubtedly become central in future novels. One hopes. The novel's plot is more suggestive than intriguing, hinting at Dewey's world and the type of characters he deals with. There's enough mystery about Dewey to cause me to want to read more.

Fortunately, I have Larson's second Dewey Decimal novel, The Nervous System, waiting on my desk.

Bonuses: +1 for a decimated dystopian New York; +1 for making me want to read the next book in the series

[See an explanation of our non-inflated scores here]
Posted by Philippe Duhart at 12:00:00 AM