An extremely cosy novel of found family, romance and magic, that may just be slightly too nice for its own good. 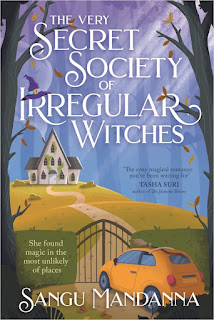 Cosy fantasy seems to be more and more prevalent recently - and with good reason. When times are stressful, turning to a book where you know things are all going to turn out fine is a very reasonable reaction to have. Romance is a perfect vector for that kind of comfort, and when paired with a nice fantasy, all the better. But there's a risk with that kind of narrative too, where the inevitability of the happy ending becomes so overpowering that it saps even the slightest tension and suspense from the story, leaving you bored. There needs to be at least mild peril, some stakes, for the happy ending to really have the full effect.

The problem is, I'm not sure if The Very Secret Society of Irregular Witches quite had enough stakes to pull off what it was trying to do.

Which is a shame, because a lot of the trappings around the core story were done really well.

We follow Mika Moon, a 30 year old British witch living a somewhat lonely life. Witches in her world are necessarily solitary creatures, all orphaned, and never joining together in communities, as meeting up in groups brings with it a great deal of danger. She sees her fellow British witches irregularly, in remote locations, for a brief and unsatisfactory secret meetings organised by their very strict and risk-averse leader. She has to move around a lot so no one realises what she is. But she has her one outlet - making TikTok videos in which she "pretends" to be a witch, as the closest way she feels she can get to being her true self in public, and even this is a cause of censure from her elders.

But one day, someone finds her on TikTok, seemingly having realised what she really is, and comes to her with an intriguing offer to come to a remote house in Norfolk to teach three very young witches how to use their powers. Drawn in by the semblance of a true family she finds there, as well as the determination to protect the girls, she's unable to resist, even once she finds out there's a very imminent need for her tuition.

And of course, there's a handsome but grumpy librarian who is very protective of the children and wary of strangers at the house too. We can all see where that goes.
Mika is simultaneously a great character, a young woman of colour whose upbringing in an empty house, by a revolving cast of nannies hired by an emotionally distant white woman, has left her not only desperate for some sort of affection, but cut off from her heritage. She knows almost nothing about where she came from and who she is, and Primrose, her adoptive mother, is not exactly forthcoming with information. But Mika is surprisingly cheerful about the whole situation. She sees her problems but isn't overcome by them most of the time, and tries to live a positive life despite the hand she's been dealt. She's also a delightfully realistic thirty year old, dealing with a lot of very modern stresses of being a single adult at 30 without a proper support system. There's also a strand of extremely self-aware humour in the way she talks about herself within the narrative, reflecting on the whimsy of her own name, for instance, which undercuts the silliness of it that might result in rolled eyes from the reader.
On the flip side, she's so trusting, so good, that she seems sometimes impossible. She bounces back, refuses to become bogged down by her troubles to such a degree that it feels hard to relate to her. And there's only so much the self-awareness can do to undercut the whimsy. Mika's dream of opening a witchy shop and solving everyone's problems with really good tea sometimes tests that limit.
The other characters have similar problems as well - the little girls are improbably and constantly nice to one another (with one brief exception later in the book), the old married gay couple are impossibly wholesome and the housekeeper is... well she's mostly absent from the story but when she's there, lovely. It's a sweetness that is definitely cosy, but can border on the saccharine.
If you stopped reading it at about 60%, I think that would be a fair assessment of the book. However, for the last portion, things shift a little, the stakes get more real, and some of the ridiculous, even artificial-feeling parameters of the early story are revealed to be not exactly what they seemed. The central problem of the story becomes both more complex and more plausible, and the relationships more fraught because of what Mika learns about the people she has come to help out of the goodness of her heart. Things we learned early on are refocused, and it becomes a much tighter seeming bit of world building than we first assumed it was.
The pace also picks up a bit, in contrast to the somewhat slice of life, dreamy tone of the early section, in which pretty much everything goes smoothly and no one has all that much to worry about.
And this is great, because the end part of the story is really very well done, but because it has that noticeably tone-shift, and that massive disjoint, it does also risk the reader looking back less favourably on what came before. You can see what building work has been done there, and why it was necessary as scene-setting for what we get at the end... but it is really quite jarring, too.
And then there's the relationship with Jamie. It is absolutely, from the first mention of him in the story, inevitable-feeling. There is simply no doubt. But for the first 60%, we get a slow-burn, will-they-won't-they that borders on infuriating. In-text, there's only the most minimal, most chaste of hints that romance may be coming between them, even while, metatextually, it is incredibly, face-slappingly obvious. And then again, we flip a switch in the last 40%, and their relationship takes a turn to both the sexual and the fraught, and they become a pair of very real, emotionally messed up 30-somethings, approaching each other in a very messed up but compelling way. And a pair of absolute, massive nerds.
And the resolution of the ending is genuinely excellent. It's not as simple or as clean as the early book would imply. It ties up threads we didn't even realise were loose, leaves things in a great place and with optimism but realism about what comes next for everyone involved. It's not a perfect happiness, but it's one where a lot of people have learned, or grown, or changed, and maybe realised their previous mess-ups and started the work of fixing them, and it is all the more satisfying for that.
But we have to reckon with the early part of the story, and what it took to get to that end. Does it balance out the oversweetness of the start by the much more complex ending? It depends. If this is a book read for comfort on a bad day, needing happy endings and good people, then yes, it probably does. But you do need to be in that headspace, to be willing to forgive a little more cosy than credulity can necessarily bear. Ultimately, I think it's worth forgiving, as both the ending and the romance are genuinely satisfying... but you're probably not going to forget, even so.
--
The Math
Baseline Assessment: 7/10
Bonuses: +1 genuinely satisfying and complex ending
Penalties: -1 somewhat sickly sweet start to the story that the ending doesn't wholly overcome
Nerd Coefficient: 7/10 an enjoyable experience, but not without its flaws
Reference: The Very Secret Society of Irregular Witches Sangu Mandanna [Hodder and Stoughton, 2022]
POSTED BY: Roseanna Pendlebury, the humble servant of a very loud cat. @chloroform_tea
Posted by Roseanna at 12:00:00 AM