A thrilling addition to a subgenre that seems, if you'll pardon the figure of speech, done to death 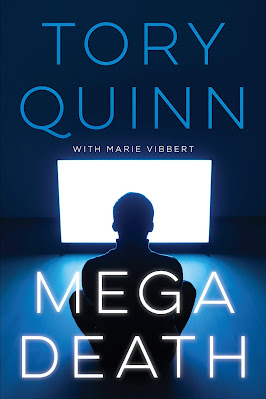 In the deadly tournament subgenre, overcrowded with such memorable entries as Death Race, Tron, Rollerball, Battle Royale, Bloodsport, The Running Man, Mortal Kombat, Mad Max: Beyond Thunderdome, The Hunger Games and Battle Angel Alita, it's interesting to see new stories are still being made. After seemingly every possible angle in this topic has been explored, an author who decides to create yet another deadly tournament story must clear a high bar to not be lumped along with thousands of mediocre imitations.

In the 22nd century where the novel MegaDeath is set, we find many of the same familiar elements: there's a globally broadcast athletic competition, with execution as the punishment for the losing team, and we're told that humankind has adopted this form of regulated mayhem as a cathartic substitute for international war. So far, so samey. Where MegaDeath distinguishes itself is in the extra building blocks of its world: if this sport is going to serve as a replacement for war, it needs to be attached to the same geopolitical consequences. In this world, the country that wins MegaDeath gets priority in setting the global agenda for the next four years, with decreasing amounts of power assigned to the losing countries in order of disqualification. The issues on the table are the same they've always been: trading privileges, taxes and tariffs, allocation of key resources. Whereas they were long ago decided by actual combat, they're now subject to the numbers on the scoreboard.

In a disturbing display of fervor that the novel uses very intentionally to blur the line between patriotic loyalty and hooliganism, the spectators and participants of MegaDeath honestly believe in this system. They'll defend its success at preventing widespread destruction by channeling the animosity between civilizations into a controlled environment that sublimates bloodlust into show business. One of the rules of MegaDeath gives the winning team the right to pillage the defeated territory for an entire day, a practice whose merits are repeatedly defended by some of the protagonists. The underlying assumption is that a mutually agreed period of supervised violence will prevent other, more explosive forms of it.

The stakes are further heightened by the revelation that fans have taken their patriotism to the absurd extreme of gambling their own lives upon the result of the tournament. A vicious circle of social pressure quickly forms because not betting your life is interpreted as not believing in your team's chances of winning. So the losing country will not only lose its top athletes, but also a sizable chunk of its population, which will bring the limited carnage of MegaDeath back to the massive casualties of conventional war. When one team discovers that the betting system might not be fully transparent, their already heavy ethical misgivings are multiplied by the millions of innocents who will die in another country if they win.

The main achievement of this novel, fitting for characters running for their lives before an audience, is the consistently breakneck pacing. The authors comfortably wield the rhythm and momentum needed to tell a nail-biting action story, although this intensity often carries over into other scenes of more reflective nature that needed a different treatment. Despite the minimal space dedicated to developing these characters, their desperation to win is communicated loud and clear. By the final rounds of the competition, their group dynamic resembles that of shell-shocked veterans.

MegaDeath is more enjoyable for the creative depictions of acrobatic violence than for any deep message contained in it. The big villain reveal isn't exactly compelling, and the ensuing discussion about the ethics of the game is held at the simplest level. This is not a book one reads for life-changing insights. This is a spectacle that demands to be experienced through primal impulses, in the blood and sweat of muscled idols whose shoulders bear the weight of the world. If the story is intended to convey any point about its themes, it may be that a replacement for war is no better than real war if it's used for the same ends and feeds the same darkness inside us. A civilization that enthusiastically sends its young to die is already a fallen civilization, and we need to ask ourselves who we're becoming when we cheer for our fellow humans' destruction.

Bonuses: +2 for the dynamic style used to narrate action scenes.

Penalties: −1 for clunky exposition, −1 for a less than gracefully executed ending, −1 because most of the transitions between scenes are too abrupt.