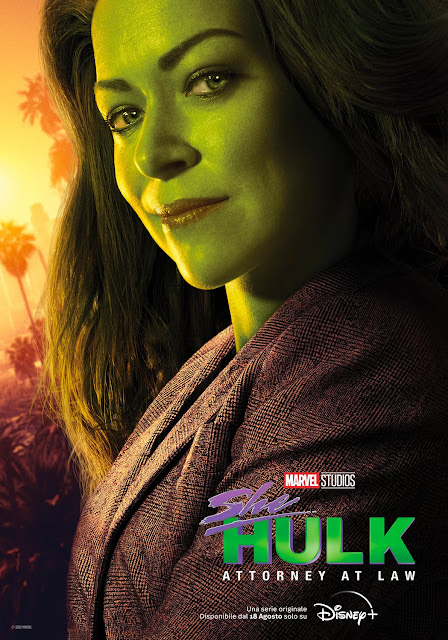 Once upon a time, a short scene after the ending of Iron Man 2 sufficed to tease Thor. That's no longer satisfactory for Marvel continuity completists. Now the stories themselves are being increasingly invaded by the promise of later stories, with less and less space for what they have to say about themselves. If there's a unifying theme for the MCU Phase 4, it seems to be about successively sacrificing each character in the service of selling another. Thus a discussion of the problems with She-Hulk needs to be, unfortunately, a boring retread of the current problems with the rest of the MCU. Black Widow exists to set up Hawkeye, which exists to set up Echo. The Falcon and the Winter Soldier is a 5-hour ad for Captain America 4. The latter half of WandaVision is derailed by the need to set up Doctor Strange 2 and The Marvels. This trend reached its self-devouring culmination in the miniseries She-Hulk, which was hijacked since its very first episode by the decision to tease whatever movie Bruce Banner will next appear in.

In a rare example of human-sized stakes, She-Hulk's ongoing quest through her series is to land a decent boyfriend. That's a perfectly valid quest; the current state of society has relegated love and happiness to Holy Grail status. To write a superpowered woman in a dating plot lends the story a magnifying lens with which to explore contemporary gender politics, body image issues, unfair double standards, online harassment, work/life balance, and the still unfinished work of 21st-century feminism. However, since one of She-Hulk's superpowers is to cross the metafictional barrier, her quest becomes one of seizing control of her own narrative and defeating the usual entitled manchildren who throw a fit whenever there's a strong woman on the screen.

The metafictional layer placed on top of She-Hulk allows for further development of a fascinating concept that was first hinted at in WandaVision and then explored more overtly in Eternals: Marvel heroes are prisoners of the franchise. They can never have their own lives. They're toys for Kevin (sorry, K.E.V.I.N.) to play with again and again and again. Since Disney can never have enough money, the story can never be allowed to end. At the extradiegetic level, this means that every movie has another one looming in the horizon, with the actors being replaced as they age (so we have rising characters written as successors to Captain America, Hawkeye, and soon Iron Man). At the diegetic level, this means that the original status quo must prevail. One brief line in She-Hulk establishes that the Sokovia Accords have been repealed, which returns things to the way they were before Civil War (not that our heroes paid any attention to the Accords after Civil War either). From watching Moon Knight or Ms. Marvel, you'd never guess that the Blip happened at all. Spider-Man: No Way Home is so averse to having a plot of its own that it unburies five other movies and then removes itself from the continuity. Things must remain just as they've always been, because the road must remain open for the next movie.

The perennial present isn't a big problem in comic books; readers accept that the heroes get rewritten and rebooted and updated all the time. That's how Batman has stayed at the age of vaguely thirty-something since 1939. But maintaining an unchanged state of affairs in the MCU demands resorting to overcomplicated excuses because this franchise burdened itself with the impossible pretense that all its stories happen together, so the setting must be kept as generic as possible to accommodate every bit of the story, because every bit of it is equally inviolable canon. Here we have an interesting case study in how far narrative conventions can be stretched before they break: this is a story that has been stuck in a neverending second act since 2012. Instead of pulling a Days of Future Past and restarting the timeline, the MCU doubles down and insists that even the other Marvel movies not made by Marvel are part of the same big story.

What this means for Phase 4 is an unsolvable dilemma. If the writers of a new show want to focus on their plot and not have to bother with the rest of the MCU, we get an isolated oddity (like Moon Knight). But if the writers want to build links that establish where their show is relative to the rest, we get not so much a show as an extended trailer for what's next (like She-Hulk).

She-Hulk could have been so much better. I've said the same of WandaVision, and Shang Chi, and Doctor Strange 2, and Eternals, and for exactly the same reason: the story cannot move past its To Be Continued status. Forget about this story, because The Show Must Go On. She-Hulk's desperate efforts to make her show her own stood no chance against the popularly awaited return of Daredevil and the news that Bruce Banner has a son. Although the writers of She-Hulk are obviously aware of the problem (just look at the title of the finale), their solution comes off as disingenuous. After an intentionally ridiculous number of Final Boss fights pile up simultaneously, She-Hulk decides that her actual enemy is Marvel Studios, so she breaks into the corporate headquarters and makes a reasoned speech about the clichés of the superhero genre and the intrusion of cameos into what should be her moment of triumph. The irksome thing about this writing choice is that it means Marvel acknowledges the problem with the Marvel formula, but can't be bothered to innovate. The protagonist states what we've been saying about the MCU, only to give us—not even more of the same, but less than the same. Somehow she saved the day. What happened, you ask? We've got no time, and look, Bruce has a son!

Having She-Hulk name the bad writing we've been complaining about for quite a while, only to railroad the ending of the show with the same old sequel bait we know to expect, feels like an extended version of another irritating Marvel tic: I point out the absurdity of my joke, so that when I go ahead and tell you the joke, you can no longer point out the absurdity. In this case, She-Hulk's monologue is presented as: I write my own harsh review, so that when I give you a mediocre ending anyway, you can no longer give me a harsh review.

I'd say good try, Marvel, but it isn't really a good one.

You see, there's a deeper problem in how She-Hulk pretends to listen to an alternate opinion before giving its protagonist her happy ending: the underlying conflict, which we're suddenly expected to believe is between She-Hulk and Marvel Studios, is pulled out of a hat. When She-Hulk visits the Al G. Rhythm in charge of all Marvel content, it fails to convey the same gravitas as Neo visiting the Architect. By superhero rules, this is supposed to be her ultimate epic battle. Not against the Abomination, not against Titania, not against Intelligencia, but against K.E.V.I.N., a surprise villain we'd been given zero hints about. For a moment there's the faintest hope that Marvel Studios will show some honest introspection, but it turns out to be a big joke. How are we meant to read the power dynamic here? Did She-Hulk defeat K.E.V.I.N.? Does K.E.V.I.N. still control her life behind the scenes? Will She-Hulk win all her future battles by rewriting the script? Depending on the answer, either K.E.V.I.N. or She-Hulk hold omnipotent control over the MCU, but knowing Marvel, this possibility is unlikely to be revisited. The purpose of inserting K.E.V.I.N. here is not to criticize Kevin Feige's stranglehold over the franchise, or address the machine-like uniformity of Marvel plots, but to sneak in the word "Nexus" like WandaVision did earlier. The great reveal bears no relation to the story we're watching. The ending bears no relation to the story we're watching. The story we're watching bears no relation to the story we're watching. It's Easter eggs all the way down.

She-Hulk's style of self-reference and self-parody is the kind of daring experimentation that WandaVision should have ended with. Instead, we're left with a more troubling reminder of WandaVision: perfunctory gestures toward a pending conversation on how society responds to strong women. This is a topic both shows allude to, but don't actually want to discuss. The internet trolls recruited by Intelligencia end up serving as a mere reminder that internet trolls exist. She-Hulk doesn't use them to say anything about online misogyny, only to point at it. The real-life manosphere has spread nonsense about this show in the same terms the script gives to its fictional trolls. OK, we get it: Marvel knew there would be a nasty reaction from an annoying minority. The producers did their homework: the leader of the hate group regurgitates old talking points we're tired of seeing repeated a thousand times in YouTube comments. The bad faith arguments are copied beat by beat and left untouched. Most crucially, the show pretends to engage with the discussion by merely representing it. But don't be fooled: She-Hulk has no time for taking a stance on toxic masculinity. Intelligencia is not there to add meaning to the story; it's only there to let us know that Marvel knows. It's like the studio naïvely believes that its tactic of preemptive self-deprecation will work on meta-ironic edgelords (i.e., "Twitter armor").

Such anxious defensive moves (the return of fan-favorite Wong, the return of fan-favorite Daredevil, the return of fan-favorite Hulk) feel calculated as a way of apology for daring to waste fans' time with a woman-led series. She-Hulk got trapped between her natural impulse to grow as a protagonist and the producers' unconfessed fear that too much growth would provoke another Captain Marvel-type backlash. This aversion to growth was literal: the digital design of She-Hulk was reportedly made smaller, the only conceivable explanation being that the studio was worried that a more muscular shape in a woman would turn off male viewers.

What results from this intricate web of preventative counter-counter-measures is, at the end of the day, the addition of She-Hulk to the pile of toys in Kevin Feige's drawer. He'll take her out to play again some day, and then she'll go back into storage. Like Wanda, like the Falcon, like Loki, like Ant-Man, She-Hulk is a tool, useful for promoting upcoming releases. The story is not about its characters. The story is about the imperative to prolong the story. Perpetually deferred resolution is the curse of being an MCU character. That is, too, the curse of being an MCU viewer.

Bonuses: +1 for effective jokes, +3 for opening the MCU to the mundane side of superpowered life.

Penalties: −2 for the frustratingly bumpy pacing of the first episode, −3 for demonstrating the exploitation of digital artists.