Microreview: The Face by Jack Vance

Jack Vance’s The Face continues the Demon Princes Quintet, in ways that are both more satisfying and better, and slightly more frustrating, than the previous novels. 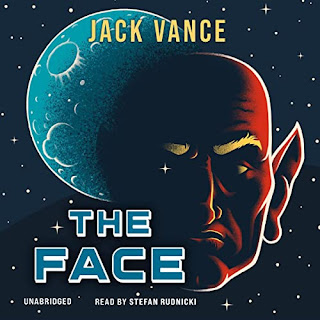 You all know the drill by now. Kirth Gersen, one of the few survivors of the Mt. Pleasant raid and massacre, has had his life devoted to identifying, finding and taking down the five “Demon Princes” that organized the raid on his planet.  He’s already taken three of the Princes out, and in the process, he has gained enormous wealth and power. But his obsession (there is no more apt word) to deal with the Demon Princes is as strong as ever.  And so we come to Lens Larque, the titular man who is The Face.

I’ve mentioned in previous reviews that the Demon Princes are procedural mysteries in the sense that the Demon Princes hide their identity, baffle identification of them, and a lot of the matter of the novels is Kirth just figuring out *who* the Demon Prince is (what alias or aliases they are going under) and then going after them. At this point in his career, though, Gersen is nit a scrappy young man who has to stumble across the trail. He has a lot of wealth, owns a bank in fact, and can bend a fair amount of resources to digging out clues by throwing money at the problem¹.

But one of the themes of the novel, which is frustratingly presented, is that all the wealth in the world only goes so far in advancing Gersen’s goals. This is presented in a positive manner, in that Gersen’s attempts to corner Lens Larque go wrong on two beats, no matter how cleverly he has laid his traps and schemes. This is a book where Gersen tries to manipulate events by means of financial manipulations. We’ve seen Gersen use an engineering firm in a previous novel, but here, a lot of the plot revolves around Gersen trying to get shares in a company that Larque ostensibly controls, so as to force a confrontation. There is also a subplot where he sues Lens Larque for damages in an effort to get him to appear in court. These schemes fall on a try-fail cycle until he finally advances matters enough that he can corner Larque where Larque cannot escape his justice.

Less successful and a recurrent problem for the  series is the role of women. Here, unlike a couple of the previous volumes, the main female character is barely a MacGuffin, save to give Gersen manpain because it turns out that even with all of the money in the world, he and she cannot come together. But I never really got what Gerdian ever saw in Kirth in the first place. The previous “Bond girls” in the Demon Princes novels were tied pretty intimately to the plot to get the Demon Prince, here, Gersen’s pursuit of Gerdian is a sideplot and not at all executed all that well.

And it might be slightly spoilery to say this, so I will be careful in doing so--but Gersen’s inability to have a relationship with Gerdian leads him to, in the end, helping to fulfill Lens Larque’s own ultimate scheme--and for analogous reasons. What they ultimately are is part of the mystery aspect of this novel and I would not give it away. But while it frustrated me that Gersen would fulfill Larque’s scheme and the relationship with Gerdian falls flat--maybe this is part of the whole point of the novel.

Maybe Vance had decided, by this fourth novel, that Gersen himself at this point was taking on aspects of being a Demon Prince himself. He uses aliases, has a couple of long term confidants and employees, works in secret and to strange purposes, has obsessions, and has difficulty in interacting in a normal manner with people. That was certainly true in the first book (The Star King) and it is even more true, now.  And so, Gersen, while still hunting Demon Princes, is himself a Problem. I don’t know if Vance has intended this potential interpretation and reading of the book, but I think there is validity here.

It should be noted that The Face is significantly longer than the previous novel, and we are about 1.5 times longer than that first novel. Vance does use a lot of this to good use. Sure, there is a lot about this seemingly endless stock scheme that Gersen tries to use, and that is of uneven provenance and interest².  What it does also provide though, is more room for Vance to do what he does best, and that is to drop Gersen in some extremely alien human societies and see how he tries to swim his way out of the latest weird local customs in order to continue his pursuit of Larque. In keeping with that, we get an extended sequence of one of the most unusual sport/game/contests in Vance's oeuvre, that Gersen himself must participate in.

In this, too, we get a contrast between the genteel and beautiful world of Methel, home of the aforementioned Gerdian, and the harsh and unforgiving world of Dar Sai, the deserty (and mineral rich) original home of Lens Larque. The latter in particular really pops as a setting. Sure, desert worlds have been done to death even back in 1979.  But this one is a desert and desolate world that is uniquely Vancian in its strange customs--and also in its technology and architecture. Architecture and buildings and how places look is something Vance has a secondary affect to how people are and what they do, but on Dar Sai, he really lets his imagination go to full effect. Dar Sai may be one of the most memorable places in his fiction.

Ultimately, though, while the book frustrated me somewhat, it may be an artifact of Vance having written this book twelve years³ after the third novel, The Palace of Love. Vance had changed and grown as a writer, and the stylistic differences, and the idea that Gersen himself might in effect be a Demon Princes are new to the series, and understated, and maybe not quite there as effectively as it might have been.I don’t think this is a good place to start even if the novels do stand alone, having some context as to why Gersen has so much money, and why he fumbles around women so much might be better to understand him and his modus operandi.

Is this my favorite of the novels? Parts of it are some of my favorite stuff in the series, and at the same time parts of it are definitively not. This re-read, now through the lens of being a seasoned reviewer, has been a fascinating experience, and I DO look forward to the last book and seeing how that goes.

¹I am reminded of the Gaean Reach RPG (Pelgrane Press) where you can roleplay a Gersen like character going after an enemy like a Demon Prince. In terms of that game, Gersen’s Wealth score has gone up, and he uses it, now as a strong lever.

²Honestly. If Gersen is James Bond, can you imagine James Bond trying to obtain shares in a company as part of a scheme to get Blofield?

³ Fans of several long running series can take heart in this, perhaps.

Penalties: -2 Gerdian is really just there for manpain, a complete and utter waste of a character. Vance has done SO much better, even within this series.