Lesbian Space Pirates! And so much more... 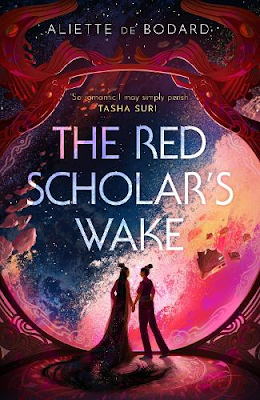 The modern SFF community sure loves a pithy one-line book description, especially when said description involves the word "space" or "in space". Tamsyn Muir's Gideon the Ninth was advertised as "Lesbian necromancers in space", Unconquerable Sun by Kate Elliott became "Genderbent Alexander the Great in space", and "Chilling Effect by Valerie Valdes somehow became "it has psychic space cats", despite said cats being a relatively minor part of a multi-layered space opera. In keeping with this trend, many people will probably have heard of The Red Scholar's Wake, Aliette de Bodard's first novel in the long-running Xuya universe of stories, via the description "Lesbian space pirates!" Perhaps, if the person giving you the pithy description has some more characters to spare in their tweet, they'll also add that one of those lesbians is a spaceship, but the big marketing draw is likely to involve some combination of three words, and three alone. Lesbian space pirates! What's not to love?

There's nothing wrong with snappy marketing, and in this case it's very accurate: The Red Scholar's Wake is indeed a sapphic romance, set in a spacefaring setting, and most of its characters are pirates. But no matter how intriguing, a three word summary can't tell you how much is going on beneath the surface of a particular book, and The Red Scholar's Wake has a lot going on beneath the surface. It packs a huge amount into its relatively short length, and expects readers to get on board with the worldbuilding of Xuya universe - already been firmly established in shorter fiction (for other long-ish tales, try The Tea Master and the Detective or On A Red Station, Drifting) pretty quickly. Worldbuilding details like bots and mindships are introduced quickly and with little direct explanation, and the book is also completely unapologetic in presenting a spacefaring society based on Vietnamese cultural norms, even representing linguistic elements not present in English like relationship-based pronoun use. It makes for a lush, intriguing world, one which requires attention readers unfamiliar with the setting, or its real world cultural precedents to grasp.

At the heart of this story is a romance between Xích Si, a tech-savvy scavenger who, at the book's opening, is captured by the Red Banner pirate fleet and is awaiting either death or a miserable indenture at their hands; and Rice Fish, a mindship (a sentient spaceship with a very human sense of identity and relationships) who has just been made a widow at the death of her spouse, the Red Scholar, in the same battle. Instead of sending Xích Si away to nameless servitude, Rice Fish recognises her technical ability and offers her a different route: become Rice Fish's new spouse, use her abilities to uncover who murdered the Red Scholar, and live out a life of relative comfort and protection on Rice Fish's decks. It's meant as a business exchange, and with no home to return to and no good alternative, Xích Si has little choice but to accept. Of course, as the two spend more time in each other's company, the genuine attraction between them becomes impossible to deny, and the two start to forge a bond which overcomes the the power dynamic between them, and their differing outlooks on life to become a marriage of love.

The dynamic between Xích Si and Rice Fish is great, and filled with just the right amount of complication: both have children (Rice Fish's much older than Xích Si's) who play different roles in the plot, and both Xích Si's experiences as a destitute scavenger and Rice Fish's loveless and unintentionally traumatic first marriage to the Red Scholar have left scars which both have to acknowledge might never heal. Because Rice Fish is a mindship, there's also an enjoyably alien element to how the two express their physical attraction to each other. Rice Fish has a suitably gorgeous (if otherworldly) human-shaped avatar which she projects as her "body" in interactions with other humans, and can also use to visit the pirate space station and the interior of other ships. But her real body is a spaceship, and that ship is full of sensors, imbued with its own heartbeat, and contains a "heartroom" where the story's most sensuous scene takes place. If you've read "In the Vanishers' Palace", you know de Bodard can make a steamy scene with a non-human partner work, and that talent is on full display again here. (For those who like to know either way how many sexy bits you're getting in your romance: one, and you can skip it and not lose any plot if that's your preference.)

But beyond the romance, The Red Scholar's Wake also shines both when it comes to the action packed mystery of unravelling the Red Scholar's death, and in the wider implications about piracy, freedom and emancipation which that plot entails. As leaders of the Red Banner, the Red Scholar and Rice Fish had built their marriage around trying to create an idealistic pirate society which offered freedom to those fleeing the controlling, corrupt empires to either side of their territory. But the realities of pirate society, which is built on raiding and killing ships in their territory and forcing survivors into indenture, fall far short of those ideals, and beyond Rice Fish's banner, the abuses of power by other pirate leaders demonstrate that they're not interested in the Red Banner's political mission in the first place. Even as Xích Si is tempted by the ease of her new lifestyle and what it would offer her daughter, and as she makes new friends among the Red Banner crews, she doesn't lose sight of the unsavoury aspects of the lifestyle and the death that it metes on others, including members of her own family. Towards the final third of the book, the ideological conflicts between the pirates and the empire they have fled from really take centre stage, and the way it plays out makes for one of the most satisfying confrontations of "noble outlaw" ideology that I've read in science fiction. And while the romance leaves Xích Si and Rice Fish in a satisfying position to begin their life together, there's plenty of uncertainty and tension left over with supporting characters which I'd love to see explored in future Xuya stories.

In short, while "Lesbian Space Pirates!" is a fine entry point for this book, The Red Scholar's Wake goes so much deeper and gets far weirder than any quickfire marketing statement could possibly capture. It won't take up much of your time on its own, but this is a great jumping-on point for the Xuya universe and if you enjoy this, there's a great deal of shorter fiction which you're going to love exploring as well.