Microreview [book]: The Memory in the Blood by Ryan Van Loan

The Memory in the Blood concludes Rvan Van Loan's Fall of the Gods (Buc and Eld) trilogy, by raising the stakes to a confrontation with truly metaphysical powers threatening to dominate the world. 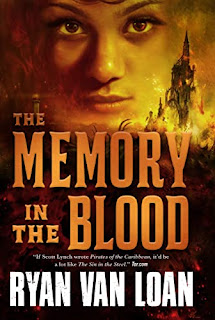 Sambucina "Buc" Alhurra has been through a lot. From brilliant street rat with a mind like a fantasy Sherlock Holmes, to being bound to a shard of a Goddess that gave her even more power and ability, her goals have been clear ever since she met her partner Eldritch `Eld' Rawlings, former military officer (and much belike the Watson to her Holmes): destroy the Dead Gods and any other power

In The Memory of the Blood, Ryan Van Loan draws this story to a suitable catastrophic conclusion but the road to get there is by turns familiar and unfamiliar both, and like in the first and second books, Buc (and Eld) will have to grow, change and face hard truths about themselves and each other, and level up to deal with the foes they must face--the Sin Eaters, the goddess Ciris (responsible for the shard, Sin, in Buc's head), and the Dead Gods themselves.

First of all it is somewhat of a spoiler to say that at the beginning of this novel, based on the events of the second, Buc is pretty sure Eld has been dead and has been dead for sometime. Like the second novel, Van Loan doesn't feel to start right when the previous novel ended, instead jumping us forward, and letting Buc piece in, and the reader figure out, what happened in the intervening months. 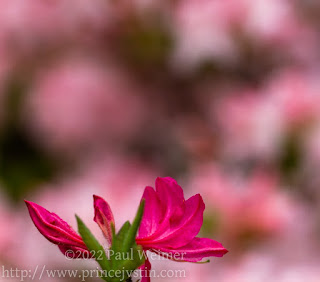 I want to argue here that all of the adventure that Buc has between these novels, even though we get some parts of them related to one degree or another, are the negative space for the Fall of the Gods Trilogy. There are some fairly major events that happen in the space between the two novels--between the first and second novel. (The Sin in the Steel and The Justice in Revenge) there is a whole plot of Buc's grandiose plans in the Kanados Trading Company, and how they ultimately went down in literal flames. And for that being negative space and only something that is related, it is enormously important to the subject matter and themes of the novel, particularly colonialism. Through the events in that particular negative space, Buc learned a painful lesson which informs events and her actions in both The Justice in Revenge and here in The Memory in the Blood.  Again, too, between that second book and the third book, Buc has been through a lot, gaining allies and associates, and having uprooted herself into the city of Cordoban.  Cordoban is an entrepot of trading and commerce and knowledge, the names and terms vaguely reminiscent of Arabic and Middle Eastern languages. We get it in dribs and drabs why Buc is here, how that works going forward, and that negative space helps put the action into relief and visibility once Buc moves her plans to fruition.

One last thing about this negative space and withholding direct things from the reader, is that it happens within the narrative as well. Buc's relationship with the shard of Ciris known as Sin is an uneasy relationship at best, that unease having started in the previous novel, and having gone straight through to here. At this point, Buc is more than willing at times to shut Sin down and keep Sin from being aware of events and the situation. This is a point that Sin complains about when Sin learns it's been two weeks, complete with and a radical chance of scenery, since last Sin was aware of what Buc was doing.

So what is the author saying here in the use of these negative spaces, and how does it influence the events of the novel. I think you can take the negative space as a metaphor for any number of things, depending on your flavor of speculation, but the one that I do like is one of memory loss and PTSD, and what we remember, or do not remember, during trauma, and how those influences change a person. How people are changed by trauma also dovetails into the story of Eld.  As mentioned above, as a spoiler, he does come back, after being thought dead. His space and role, and what is expected of him, and how he fights to be himself could have been an entire novel from his point of view in and of itself.  Here it is a major subplot (and Eld gets a substantial amount of POV screen time) but it feels a little unexplained, directly, again, relying on negative space.

I've spent a lot in this review talking about things that are not there, and so I think at this point it is time to talk about what IS here, what is thrown into relief by the use of the negative space.  The first two novels, positive and negative space, lead up to this latest plot, and the stakes do go truly cosmic.Buc's desire to go against the Godshas been present since the first book, but here, in The Memory in the Blood, she has a chance to actually strike at the Dead Gods, and the very living and equally dangerous goddess Ciris as well. Like all of Buc's plans, as in the tradition of her progenitor Sherlock Holmes, her plans are a combination of clockwork precision, improvisation, and audaciousness.

It should be noted that Buc's story isn't, in my view, really about Gods per se, in a theological sense. What Buc's story has been for me, since it's beginning, is all about colonialism, oppression and how Great Powers grind the average person on the street down in their endless appetites. That motif has been throughout the series, and Buc's attempts to come to terms with it, and upend the apple cart, has been the driving force of who and what she is.

Her attempts to join the Kandos Trading Company in The Sin in the Steel (and her fall from grace in the liminal space between that book and The Justice in Revenge) can be seen in the light of the brilliant Buc trying to co-opt and work "within the system" to make it better--only to find out that her attempts to do so in the end run up against too many entrenched interests, and taking a third option is the only way to do lasting change.

That theme of colonialism and great powers moves upward from the Trading Company to the political conflict that overhangs the third book between Buc's native city of Servenza and the duchy of Normain, with powers like the Cordoban Confederacy caught between them in their struggle. Going up to the final, cosmic scale, the longstanding conflict between The Dead Gods and Ciris herself, a conflict Buc stumbled into quite literally in the second novel, is ultimately the most fulminating and grand scale expression of colonialism in the novel, a colonialism of temporal and spiritual power alike, with the fate of the entire world in the balance. Given Buc's arc up to this point, her efforts and goal to topple both of these oppressive forces makes for a logical endpoint to the entire series.

There is much else here, from Buc and Eld finally figuring out their relationship, Buc growing as a person, and as in the first two novels, a stream of imaginary literary references and the books Buc has read. One marker throughout the series as to the time jumps between novels, is that in between them, the number of books Buc has read explodes. Van Loan likes to play with these references and fake books, alluding to ideas from our own history and philosophy and showing that at the bottom, once Buc learned to read, that she is in the end, like us, like those who pick up the series--she is a *reader* and likes to think about what she has read and how that applies to her life and what is happening now. In the end, I left the conclusion of this series with such thoughts myself--about colonialism, oppression and how to fight systemic injustice.

Bonuses: +1 for a rich use of liminal space to tell the story of Buc and her fight against the Gods

+1 for excellent and immersive worldbuilding

Penalties: -1 Sometimes the pacing of this final novel isn’t all that it should be.