Aidan Moher (he/him) is a Hugo award-winning writer and editor who has written about almost every niche facet of geek culture you can think of from Terry Brooks to Dungeons & Dragons. And whether he’s penning wildly read essays on Lunar: Silver Star Story, the undeniable lasting power of Chrono Trigger (the best RPG ever made), or the forgotten history of Magic: the Gathering, he manages to infuse deep, personal, endearing hooks into every story he tells. He’s written for outlets like Wired, Kotaku, Electronic Gaming Monthly, Uncanny Magazine, Fanbyte, Tor.com, and more.

1. What game are you currently playing?

Appropriately, I'm splitting my time between a couple of JRPGs—one current, one retro.

On the big screen downstairs I'm about 60 hours into Xenoblade Chronicles 3 and still mildly obsessed. I really love a lot of creator Tetsuya Takahashi's older games—especially Xenogears, which I just finished replaying—but bounced hard off Xenoblade Chronicles 2, so I was a little hesitant when they announced the third game. It's exceeded all of my expectations, though, and is probably my favourite game in the series now—an improvement on the second game in pretty much every way. Vast world, memorable characters, and Takahashi's typical zany JRPG plot is a drool-worth combination.

Upstairs in my CRT corner, I'm playing Paper Mario for the Nintendo 64 for the first time. I've enjoyed many other games in the series—including Sticker Star, which has a bad reputation—but the original slipped past me for a variety of reasons. It's wild to go back to the very beginning and see all of the series's trademarks right there, fully formed, polished, and perfectly enjoyable 20 years later. It's genuinely funny, the combat is simple but engaging thanks to its timing-based mechanics, and its got some of the best graphics on the system. 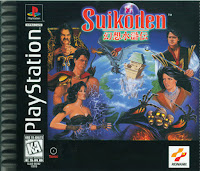 2. What upcoming game are you really excited about?

Oh, man, there's been a bunch of announcements that've really got me excited—like Octopath Traveler II, the HD-2D remake of Dragon Quest III, Final Fantasy XVI—and long-announced games—like Sea of Stars and Quartet—but the one that really stands head and shoulders above the crowd is Konami's recent reveal of Suikoden I&II HD Remaster Gate Rune and Dunan Unification Wars. The Suikoden series brings such a unique perspective to the JRPG genre, and since the very first game I've been immersed in its overall plot, which arches over several different games. I was thrilled when some of the original creators announced a spiritual successor in Eiyuden Chronicle: Hundred Heroes—which I'm also really excited about—and genuinely thought we'd never see another Suikoden again. Hopefully, if things goes well with the remaster, we might see a continuation of the overall series and finally get some answers about WTF is going on in Harmonia.

I'm also just thrilled that a new generation of fans will get to discover Suikoden, and heartened to see a publisher give an older JRPG the love and attention it deserves. 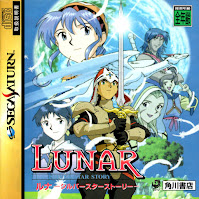 3. Is there a game you're itching to replay?

I was planning to replay Suikoden 1 & 2 so I could keep up with the latest season of the Retrograde Amnesia podcast (which is brilliant and highly recommendable to any JRPG fan), but since the announcement of the remaster I've turned my attention to a couple of other old Game Arts favourites: Lunar: Silver Star Story Complete and Grandia.

I'm looking at playing them on my newly acquired Sega Saturn. Thanks to the Fenrir ODE (an easy to install device that let you play games directly off an SD car) and a vibrant fan hacking community, it's now possible for me to apply the English localizations to the Japanese versions of the games. (Both of which I own Japanese discs for.)

In Grandia's case, the only version released in the west was for PlayStation, and while it's fine and playable, the Saturn original has many little graphical elements—particularly in combat—that the PlayStation didn't handle well and had to be downgraded. I've been wanting to replay Grandia for a while now, and getting to experience the Saturn original is the perfect opportunity for that.

Lunar, on the other hand, has a complex localization history, which I've discussed in the past. Whatever you think of the translation (I like it, despite some of the problematic issues and weird humour), localization company Working Designs also significantly tweaked the gameplay in the western version released on PlayStation, making it much more difficulty and grindy. This stands at odds with the game's warm, kind, and adventurous Saturday Morning anime-style story, and is often the reasons I end up bailing on replays after a few hours, so I'm really looking forward to being able to experience the story with a more appropriate difficulty level. 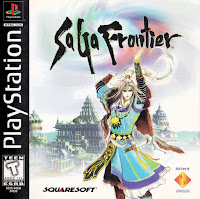 4. Is there a game that you've changed your mind about over time - either positively or negatively?

This is a really interesting question. I can't nail down a specific game that I've overtly changed my mind on over the years, but what I have done is change how I think about, define, and appreciate Japanese RPGs.

The first of these are my thoughts on the label of Japanese RPG in the first place—I used to be very staunch with this, thinking that a game had to fit into the original Final Fantasy or Dragon Quest's mould to be considered a true blue JRPG. But, over time, I've come to think of labels like "JRPG" as being a shorthand for inspirations, themes, and ideas. So, nowadays I'll happily look back at classic titles like Ogre Battle: March of the Black Queen, Wild Arms, Secret of Evermore, and Final Fantasy Tactics, and discuss them within JRPG "canon" despite being very different games from a gameplay perspective. They're JRPGs, but they're also other things. Thinking of labels as inclusive but not exhaustive identifiers has helped me enjoy and understand the genre in a much broader way.

Oh, and, I guess SaGa Frontier. Playing it back in the day—right after Final Fantasy VII blew everyone's socks off—was a puzzling experience, but, with a lot of perspective and patience, I really admire and appreciate what creator Akitoshi Kawazu was going for. (Even if it's still not fun to play and often feels half finished.)

5. What's one game, which you played as a child or young adult, that has had a lasting influence on you?

It's pretty much a meme at this point that I like Chrono Trigger, so.

But, there's also a good reason for that: Its really great. Final Fantasy VI was the first game that really turned me onto the JRPG genre, but it was Chrono Trigger that turned me into an obsessed fanboy. I came to the genre midway through the 16-bit era, and by the time Chrono Trigger was out, the Super NES was nearing the end of its lifecycle. It's a perfectly polished representation of everything the 8- and 16-bit JRPG generation offered. Gorgeous sprite-based graphics, snappy turn-based combat, a tight story with absolutely no filler, a non-linear second half, incredible use of the Super NES's soundchip, etc.

The development team, which was comprised of the creators of Final Fantasy and Dragon Quest, along with many, many others who eventually became JRPG household names, like Tetsuya Takahashi, Masato Kato, and Yasunori Mitsuda, used it as an opportunity to take everything great about the genre up to that point and pack into int a Greatest Hits-style game. To me, it represents the height of that golden age, and then left the door wide open for Sakaguchi to rewrite the genre with his next major release: Final Fantasy VII.

To prepare for Fight, Magic, Items, I did a deep dive history of Chrono Trigger called "Timeless" that explores the game, its creators, legacy, and impact. It goes into much more detail about why I think Chrono Trigger is such an important game to the genre and to me personally.

6. What is your upcoming project and why is it awesome?

Fight, Magic, Items: The History of Final Fantasy, Dragon Quest, and the Rise of Japanese RPGs (Oct 4, 2022/Running Press) is exactly what it says on the package. It's a history of Japanese RPGs and the people who make and play them. Over its course, I explore the genre's early inspirations thanks to Dungeons & Dragons and PC RPGs like Ultima and Wizardry, the creation of its two most famous franchises, Dragon Quest and Final Fantasy, the genre's surprise rise to meteoric popularity in the west thanks to the breakout success of Final Fantasy VII, and how it navigated the struggle to adjust to the HD era as it made its way to a new revitalization thanks to indie studios and a renewed interest in the genre by young and older fans alike.

At its core, it's a history that focuses on human stories. I didn't want to just write a long Wikipedia-entry, so through the perspective of a western gamer, I dug into the emotional and creative drive that led to people like Sakaguchi and Horii as they created the genre, and the drive and perseverance of creators like Rieko Kodama and Shigesato Itoi as they took that blueprint on new adventures. It's a very personal book, tracking my experiences as a young fan, and my time growing up alongside the genre, and explores universal stories about fandom and creativity, drive, perseverance, and legacy.