Intrigue, mystery and danger surround the archives at the heart of an Empire. 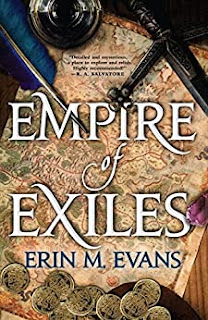 The workers at the Imperial Archives suffer under a lot of stress in their normal daily jobs. Cataloguing and keeping the Imperial artifacts and documents in the archives is stressful enough. Some of the archivists have magical affinities for certain materials in the archives. This makes them uniquely suited to handle and work with, say, bronzes, but that elemental affinity can be a weakness. For one with such an affinity can be lost to their element, to disastrous and deadly consequences for both the archivist and those around them.

But all of that takes a backseat when a seemingly straightforward murder-suicide in public rocks the political scene of the empire, and reveals some deeply held secrets, from the personal, to those that reverberate across the entirety of the empire, and beyond.

This is the world of Empire of Exiles, first in a new series by Erin Evans, perhaps much better known for her Tiefling Farideh in the D&D verse.

I want to explore the story of this book and lead you through its labyrinthine and twisty plot, worldbuilding and characters by leading you through the story as seen by the title of the book and the series title. Empire of Exiles  is a complex, complicated and meaty secondary world fantasy that is ALSO a murder mystery. Contra the maps in the book, the action is very contained, even if the implications and the reach of the stories of the characters in the book, and the story of the empire itself is far grander.

So let’s start with the title: Empire of Exiles.  In the grand map of the continent, the Semillans are confined to one corner of the continent, blocked off from the rest of the landmass by a wall of Salt. Why? It turns out that once upon a time, the kingdoms that quarreled and spread themselves across the world were attacked, ruthlessly, by deception and intrigue, by shapeshifters impersonating people, sowing dissent, discord and war¹. The results were catastrophic, empires and kingdoms fell, and those who survived all crowded into one small peninsula in the northwest of the continent. With ancient heroes having raised a Salt Wall to keep the doppelgangers at bay (salt is one of their weaknesses), the exiles could begin again to create an Empire. Thus the title.

The ever constant threat and memory of the doppelgangers and what was lost helps fuel this book in a number of ways. First, the Imperial archives themselves, as a lot of accumulated treasures taken during the flight (and the fight to seal up the peninsula) have wound up there for the archivists to manage and preserve, and a request by the heirs of one of the fled peoples for some of that property helps kick off the book’s main narrative. After a somewhat cryptic prologue, we get to meet one of our major viewpoint characters, Quill, who is visiting the archives on such an errand. This helps set our frame and gives us an entrée into the archives and their characters and their world. We also in the same first chapter meet our other major viewpoint character, and who I would argue is the heart of the book, Amadea Gintanas, Archivist Superior of the Imperial Collections (South Wing). The “Solver of Problems”, Amadea is a classic Erin Evans character--long and mysterious backstory, competent, put upon, and ultimately the determinator whose relentlessness helps drive her, the plot and the novel.

But back to the Exile nature of the doppelgangers. You’d think that an Empire that,even though it is safely behind a Salt Wall, is going to have long memories and protocols and lore (archives, again!) about doppelgangers. You might even think of them as an existential bogeyman for the Empire. And you would be right. The threat of doppelgangers, and doppelganger related products (both derived from and used against them) feature heavily in the narrative, especially in the aforementioned murder mystery. How can you have a murder mystery in a seemingly murder/suicide witnessed by multiple people? Doppelgangers..but not in the way you think...or do I?  The mystery and the particulars do eventually come out, and a lot of the novel works as a puzzle in that regard as Quill, Amadea, and the other archivists bounce on and off of the mystery, and the machinations behind it, and the machinations underneath the Empire itself start to be revealed.

Let’s jump over to the “Books of the Usurper”, speaking of machinations. What precisely does this mean? It turns out that this Empire of Exiles is not a placid realm, but one riven by factions and would be usurpers.  Nearly three decades before the events of the book, a civil war broken out in this fractured human realm. Sure, the Usurper was stopped, but the mysterious “Grave-spurned Princess” he was supposedly marching on behalf  for vanished.  Or did she? And is the Duke really dead?  And what does this all mean for the current plot? These are tasty ingredients for not just this book but an entire series and Evans lays this all out. Oh and remember when I mentioned Quill was here to get items from the archives? Those items are, in fact, tied to that 3 decade ago rebellion. Not that he knows their true significance...

Talking about the mystery itself and its resolution is difficult in specifics but I will stick to generalities. I was expecting more of a straightforward secondary world fantasy here, instead I found a mostly cloistered fand fascinating secondary world riven with the threat of the Doppelgangers still (there are politics regarding the Salt Wall, as you might suspect) and the not so dead plans of the dead Duke and his rebellion, all focused through the murder mystery and the mysteries at the heart of the archives. I found the magic system fascinating, how affinities work and their weaknesses as well as strengths.

And while Quill is ostensibly our viewpoint entry into the archives, the real heart of this book, if I didn’t make it clear, is Amadea. She is THE Evans heroine, and her history, story and choices define this book. Solver of Problems has a lot on her plate, and a lot in her past to deal with. I enjoyed her as a competent heroine with a history and her central space in the book helped make the book for me.

The novel does come to a good conclusion and an off-ramp for readers who do not want to return to Semilla. But it is the first in the series, and it has a hell of a final WHAM line that clearly is a setup for the next novel in the series and a major development for Yinii, a character whom I have not even mentioned in this review². I would like to read more in this world and with these characters.

¹in D&D terms (appropriate for an Evans work), think of them as very chaotic evil Dopplegangers, but more interested in destruction of society than individuals.

²To be fair, even though this is a relatively narrow epic fantasy in terms of space, it has a raft of characters. The Dramatis Personae in the front is extremely useful. It is comprehensive, and it doesn’t make clear who is the most important characters, and a couple of the entries, after the fact, made me laugh. It makes sense in context.

Bonuses: +1 for a strong and engaging murder mystery plot set in a richly imagined setting

+1 a strong set of characters, from the primaries like Amadea and Quill to minor ones

Penalties: -1 Some of the finer intracies of the worldbuilding may be lost to readers because of the focus of the novel