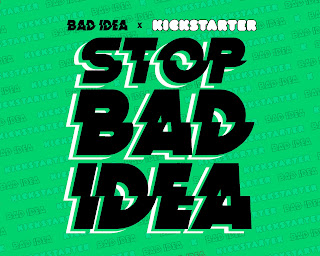 The bizarre marketing stunts for Bad Idea have returned alongside their return for another round of incredible looking comics.  In addition to encouraging 200 protestors to picket their booth at New York Comic Con in exchange for exclusive comics, they launched a Kickstarter yesterday that will supposedly lead to the end of Bad Idea as we know it if it raises $2.6 million.

The Kickstarter surrounds one of their titles from the first round from the dynamic duo of David Lapham and Matt Kindt, The Hero Trade. The first issue showed up at comic book stores with no mention of who created or published the comic. Some of these comics ended up in the trash, but people quickly caught on to the stunt.  While the story appeared in parts of other Bad Idea books, and even another promotional surprise with the Passive/Aggressive storylines, the Kickstarter is the only way to get future chapters of the story collected in an impressive looking hardcover.  There is even one tier to get a hand-painted cover by Matt Kindt.

It is important to note that the Kickstarter goods will be delivered even if the $2.6 million stretch goal is reached, but it puts the round two books that have been pre-ordered blindly by myself and others at participating stores.  For the second round of Bad Idea's books, fans were encouraged to pre-order the titles blindly, but given how much I enjoyed the first round I was not hesitant to pre-order these books.  It will be interesting to see how the 20 day campaign goes and I am sure there will be some surprise updates along the way.