Microreview: One Arm Shorter than the Other

This book starts as a simple story collection, but before you notice, it grows into a mind-blowing trip across time 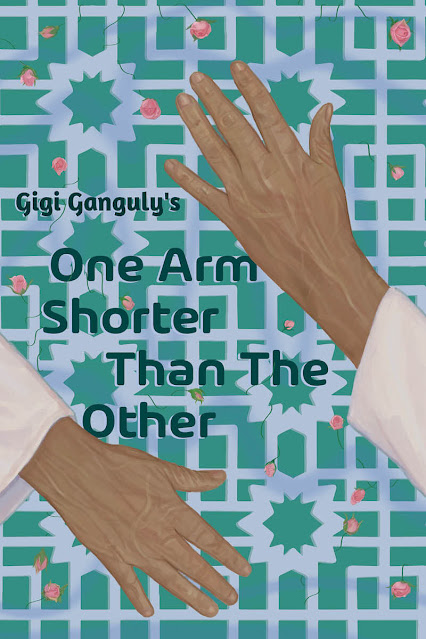 Gigi Ganguly's debut novella, One Arm Shorter than the Other, is a marvelous surprise. For half of its length, it holds its cards close to its chest, before sweeping you off your feet with a royal flush of high concepts and intricate plotting.

The first half is composed of a series of sweet vignettes around a kindly repairman who does wonders from his unassuming little shop in Delhi's old district. These three stories start simple enough, but gradually turn more and more surreal. In Some Things (Like Upholstery) Remain Unchanged, a widower bonds with his grandchildren by having his old film projector transformed into a window to the past. In Be Careful with the TV Settings, an embittered actor with a fading career discovers that his newly fixed TV can place him in any story he chooses... so he must take care not to choose wrong. In Turn Up the Radio (Only) When It Rains, a lonely old woman receives a radio as a gift, and with it, a new friend, and a new future.

Film, television, radio: these are stories about media and interactivity, about the act of watching and the magic of human connection. Little clues reveal that these stories share the same continuity, and if the book stopped at them, this would be in itself a valuable collection.

But then comes the second half of the book, and the panorama expands to cosmic proportions. We jump to the 71st century, a time when cities have layers upon layers, but people can fold their houses into flat rectangles and carry them around. We meet Samay, the architect behind this revolution in portability, and it turns out he's in need of repair services. Fortunately, his civilization has mastered time travel, so he pays a visit to old Delhi... and meets our trusty old repairman.

What I can say is that this is one of the most elegant time loop puzzles I've ever read, as well as a thought-provoking allegory about the passing of time over physical space, over the human body, and over our material possessions.

I already spoke about the role of media in the early sections of the book. We all know there's something of time travel in our access to recorded content. But this book further suggests that there's something of time travel in the act of repairing. To repair is to take the old and make it feel not old, to try to bestow a semblance of newness onto it. To repair is to try to work against time. But rebuilding is also a form of repairing, in the sense that working along with time and building over what has crumbled down can make the old fully new again. This is not only a book where old objects can acquire new forms, but also where an old city can remake itself by pushing a button, and where old people can migrate into new bodies.

You can experience that contradiction in the real Delhi, a cosmopolitan megalopolis where the future coexists with antiquity, where the many cities this city has been are overwritten on each other in that special way that landscape historians call urban palimpsest. In Delhi, an ordinary walk across neighborhoods is indeed time travel.

So Delhi's relationship with time is central to One Arm Shorter than the Other (a title that not only describes our protagonist, but is also a sneak reference to clocks). The text namedrops, for example, Jantar Mantar, one of the most notable landmarks in the city. It is an astronomical complex built three centuries ago whose function was to keep track of the movements of stars. Basically, it was a clock.

There used to be another clock in Delhi: the Ghantaghar tower, which was built during the British occupation and accidentally collapsed after independence. The fall of this tower, a symbolic break with the past coinciding with the birth of modern India, is a key event in the book, the inciting incident that ripples across time and closes the loop that links old and new Delhi.

The older clock still stands, while the newer clock is no more. Such is the nature of cause and consequence in the city that is old and new at the same time. Such is the nonduality of a culture with a cyclical concept of time, where the same word means "yesterday" and "tomorrow." Such is the rich ambiguity at the heart of this exceptional book. One Arm Shorter than the Other will wind up your mind and set it running. It is a very brief read, but it contains eons.

Penalties: −1 because the tying up of the time loop at the end of the book requires some railroading that constrains the characters' choices. This is always the tricky part about writing time loop stories, and its final execution here tends a bit toward the just-so. To be fair, the repairman has tight logical reasons to suddenly withhold information in the way he does, but Samay's growing frustration is the side the reader ends up identifying with.