Titane is an acquired taste, but it was just the kind I was looking for. 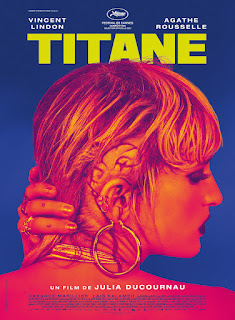 In the French film Titane, the protagonist Alexia is severe and rigid, just like titanium. Titanium also has a high melting point—just like Alexia’s seemingly cold heart. Alexia might have titanium literally in her head, but the metaphors of what it represents extend to the entirety of her body. Titane asks the question: what would it take for a soul that neglects warmth to others and also in themselves to melt? The settings in many scenes within the film are literally fiery but fire doesn't quite seem to be doing the trick. Would a pregnancy prompt her to adopt a parental role? That doesn’t seem likely either. The question is eventually answered, though. Titane starts out with some of the most brutal, unfeeling showcases of (in)humanity. I’ve seen in a while, then takes time to melt its titanium casing to show something still wholly grotesque but also wonderfully humane.

Alexia (Agatha Rouselle) – is a victim of a car crash when she’s a child. To deal with a skull injury, she has a titanium plate placed in her head. It soon becomes evident that she has a penchant for cars. Years later, adult Alexia works as a showgirl at a motor show. She’s also a serial killer. She also has sex with a car (I won’t go into details) and becomes pregnant. Soon after, the authorities are on her tail, so she transforms herself to look like a man—specifically a man named Adrien who went missing as a child. She goes to live with Adrien’s father, Vincent (Vincent Landon), and they develop a kinship. But secrets will divulge, psyches will be tortured, and things will unravel.

The best parts of Titane are in its latter half. The early goings would be rough for certain people that aren’t enamored by murderous scenes portrayed in gruesome detail. I almost had a fight or flight response to those scenes in which I might have walked (or ran) away if I wasn’t seeing the film with others. Despite my ambivalent response to those scenes, I do think they’re necessary for establishing the brutality of Alexia, making her transformation more effective.

But the second half? Marvelous. Agatha Rouselle brings a bucket of pathos, but Vincent Landon brings a water fountain of it. His grief and willful dismissal of all who say Alexia isn’t his son is so cutting. It’s clear he knows almost right away that Alexia can’t be him, but he charges head-on into the charade rather than into the heart-wrenching truth as his love for her burgeons rather than deflates. Alexia and Vincent’s kinship has enough substance to carry a normal film, but this isn’t a normal film—it’s something better. Their bond is injected with tension as Alexia’s quickly developing pregnancy threatens to divulge her identity to those waiting for something to validate their suspicions.

The film ends in the best way it can: with graphic imagery cocooned in something heartfelt and cathartic. Through all the fires that Alexia passed through in Titane, they never failed to melt her titanium plate. But something just as severe – a cold heart – could melt in another way. Yes, I’m talking about love. As cheesy as it is writing it in a review, it never felt that way while watching the film. Titane leverages its unique style that slowly gets less disorienting and brutal to convey its message just as much as through its text. When it arrives at its cathartic moment, don’t be surprised if the closed off, hardened part of you melts down for just a moment. Maybe there will be a generation who won’t have an environment that’s so crude, where the severity won’t be so prevalent. The hope of futurity can be heartening. It could happen one day to our grandchildren or to our car-grandchildren.

+1 For an unforgettable second half

Negative:   -1 For what almost felt like an unrelentingly grotesque beginning