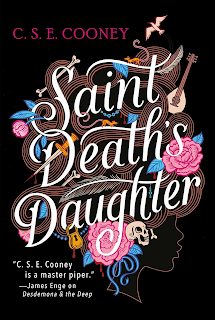 Miscellaneous Stones - Lanie to most people who know her - is a necromancer, and one of the last surviving members of a family of grim royal assassins in the country of Liriat. Having been born with an allergy to violence, to parents whose professions revolve around assassination and execution, Lanie has grown up with almost no company beyond her family's revenant, Goody Graves, and the spirit of the family's last powerful necromancer, Irradiant Stones, who has trapped himself in the padlock of a sarcophagus that contains the trapped spirits of his enemies, and now divides his time between training Lanie, berating her, and plotting to steal her body.

Luckily for Lanie, things are about to take a turn for the interesting. Unfortunately, this is going to require the death of her parents; the return of her conniving, manipulative sister and the shapeshifting falcon-man she has captured from a foreign excursion and intends to force into marriage; the schemes of the rival Scratch family and their attempts to take over Stones Manor (and marry Lanie to one or more of their three sons); and, after a neat little timeskip, the fallout from her sister's years-long campaign of murder against a foreign country's mage population (who all happened to be married to its ruler, The Blackbird Bride - oh, and she's keen to add Lanie to that list of spouses too) and its broader political consequences. All of this pushes Lanie, Goody, her brother-in-law Mak and her niece Datura out into a wider world that has plenty of its own intrigues and dynamics going on, and Lanie gets to deepen relationships with the few people she knew in her old life - like Canon Lir, the sibling of Liriat's heir - and build new connections with the people of Liriat, particularly the diaspora from Mak's homeland, Quadiib. To talk about any more plot points would start to spoil what is a very episodic, twisty book, so let's just say that things happen, a lot, and it's up to Lanie to figure out how to do right by the people in her life and rise above the grim legacy of her family and everything it has taught her, and avoid being charmed into any marriages or possessed by the spirit of her own ancestor.

All this is to say: Saint Death's Daughter has a lot of story to tell, and it doesn't hold the reader's hand when it comes to building in worldbuilding elements that make that happen. The broad aesthetic here is "whimsical gothic": regular footnotes detail the lives and creative deaths of Stones ancestors, and early chapters have a real Ghormengast-y vibe, with isolated characters rattling around in a grim, closed-off mansion (although Nita's arrival makes it clear that this isn't going to be a novel about upholding tradition or ritual in any standard sense). That aesthetic persists through later sections, even as it becomes clear that Lanie's family are very much the outliers in this world, and somehow Cooney balances the fun aspects of that lens with a story that builds increasing nuance around its different factions and cultures. It's particularly noticeable when the story returns to characterisations that were set in early parts of the story, like when Lanie finally gets around to realising she doesn't know Mak's real name, only the nickname that her sister gave him, or her discovery that the Scratch family's three identical, dull sons are actually their own people, and their too-identical, oversimplified names have also been changed for Lirian consumption. All of this happens in Cooney's wonderful prose style, and with attention to elements like the workings of magic and how it interacts with the wider world. I particularly enjoyed the inclusion of "surges": days of magic at the solstices and equinoxes where people's magical abilities are at their strongest and most intoxicating, and which provide various turning points and catalysts for Lanie's decisionmaking each time they come around.

The sheer amount going on here and the way it's handled in almost episodic format also makes Saint Death's Daughter shine as a coming of age novel, and this is one of the best I've read since Rachel Hartman's Tess of the Road. Because each part of Saint Death's Daughter comes with its own story beats and climaxes, and each offers challenges that Lanie needs to grow past. As the story progresses, we see Lanie shift from being a mostly passive, trapped protagonist with the ability to make decisions only at the most intense moments, to someone with a much greater amount of agency and the ability to work with others to change things for the better. The length gives Lanie time to make mistakes and then fix them, push people away and then have them come through for her anyway, and it also gives her the opportunity to learn how and when to let the judgement of other people affect her, and what her legacy as a Stones really entails. After its first section ended in a timeskip and propelled its characters into an unexpected new situation, I accepted that I was never really going to know where Saint Death's Daughter was going next, and it made for a highly entertaining experience, with lots of satisfying twists and turns that all made sense for the characters and what they were going through.

I can see how this book won't work for everyone: the sheer amount of information and the sometimes slow plotting are a choice, and if you don't gel with the main character or the prose style, this is going to be a long read. For me, though, Saint Death's Daughter has gone straight to the favourites list, and I can't wait to see where the adventures of Lanie take her.