Microreview: We Are the Song by Catherine Bakewell 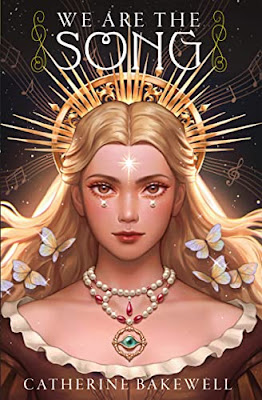 When the placid land of Cadenza finds itself without a ruler, the neighboring kingdoms of Basso and Acuto battle for control of it. More than the agricultural bounties of the region, the claimed justification for all this violence is to take care of the holy site where the creator goddess Caé fell to earth and sang reality into existence. As hostilities worsen, the twelve Singers of the Goddess, divinely gifted performers whose voice can work miracles, roam the lands offering hope and succor to the powerless. After young Singer Elissa uses her magic to clear a roadblock on a town's only supply route, she gets dragged into the ambitious schemes of successive politicians who wish to turn her into an instrument of war. Will she allow her gift to serve harmful ends, or will she dare defy the most powerful people in the world?

We Are the Song presents an interesting scenario of religious conflict that author Catherine Bakewell uses to inspire young readers to question overreach of authority, the weaponization of art, the distortion of religious doctrine for political motives, and the concept of "holy land." In an apparent echo of J. M. Straczynski's celebrated line, "If sacred places are spared the ravages of war, then make all places sacred," this novel argues fervently against the use of faith as an excuse for atrocities.

The treatment of magic, music and prayer as the same force creates incredibly fertile avenues of interpretation. Ordinarily, an ethical allegory would focus on the danger of magic in the wrong hands (i.e. weapons of mass destruction), or the danger of putting art under government control (i.e. censorship and propaganda), or the danger of blending religion with politics (i.e. inquisitions and holy wars). Bakewell's effort to tackle all three problems at the same time is a bold bet that, for the most part, yields a rich payoff.

This book's success relies on the believability of its protagonist, and twelve-year-old Elissa is a solidly built one. Her inner conflict as a musical prodigy raised in seclusion and tasked with more responsibilities than any child should have to handle adds thick layers of dramatic potential to her personality. What she lacks in political education she compensates for in innate gentleness. It's hard to be an optimist during a world war, but Elissa's determination to see the good in people and her uncompromising adherence to pacifism make her the heroine her world needs.

We need the protagonist to be this strong, because the epic quest at the core of the story is essentially about planning a divine intervention. That's right: Bakewell assigned herself the near-impossible task of pulling off a deus ex machina, the riskiest gamble in genre fiction, and without a personality as compelling as Elissa's, the whole endeavor would have come off as transparently contrived. Fortunately, Bakewell's strategy of making us experience the story through Elissa's feelings helps the climax arrive organically. This may be a book where flowers transform into birds, but its whimsical aesthetic never fails to respect the reader.

Hard questions about justice, suffering, inequality and corruption get a serious treatment suitable to the intended readers' level of maturity. One wouldn't expect a story targeted at middle-grade kids to attempt an answer to the problem of theodicy, arguably the most challenging topic in religious studies, and the solution suggested in We Are the Song isn't a very sophisticated or satisfying one, but it fits the internal logic of the setting and provides the emotional resolution that its protagonist was always headed for.

We Are the Song is a potent plea for the independence of artists. Storytelling, both secular and sacred, employs human emotion as its tool. At a time when politicians are becoming so expert at storytelling, we need more stories that challenge that kind of misuse of our innermost drives.

Bonuses: +1 for translating the convoluted ethics of religious war into a form appropriate for child readers.