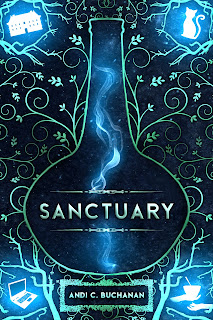 Autumn is arriving in the southern hemisphere and the season wouldn't be complete without a good ghost story.

Casswell Park is a sanctuary to many, including the queer, the neurodivergent and the non-corporeal. Morgan and their housemates have made a home for themselves in the dilapidated manor, a place that might be impossible to heat but affords a privacy and understanding that most of them have not experienced elsewhere. Even the ghosts (mostly) respect personal boundaries and live in harmony with the other occupants. That balance begins to tip out of control when the house receives an old collection of ghosts trapped in bottles... along with something far more malevolent.

In my previous review, I complained that the diversity in The Aurora Cycle by Amie Kaufman and Jay Kristoff remained very much at surface level. Sanctuary by Andi C. Buchanan serves as a brilliant contrast, centring diversity throughout the story.

It is told in first person from the perspective of Morgan, a non-binary person with autism, social anxiety and some minor psychic abilities. Speaking can be difficult for them and throughout the book they change up the way they communicate -- switching between talking, typing and sign language -- sometimes within the same conversation. The first person perspective lets the reader get a sense of how their capacity fluctuates and changes, depending on the circumstances.

Morgan has quite a few housemates, all of whom are marginalised in multiple ways. All of them are neurodiverse in some way and most of them are queer. All along, the story shows their struggle to get by: the difficulty in holding what's considered a regular job or even to make enough money to survive. It also shows the accommodations that aren't a struggle, but simply necessity: things like the need for quiet or privacy, the understanding that the use of fidget toys isn't a sign of inattention, or that eye contact can be hard. These character also encompass a range of ages, which I found immensely refreshing.

If this sounds like it has found-family feelings, you'd be right. The book opens with a communal dinner to celebrate the last day of the holidays before the two youngest housemates return to school. Its focus on how the characters live and interact give it a cosy, slice-of-life vibe, at least in the beginning. This makes the pace naturally a bit slower than many readers may be used to. While I mostly enjoyed it, things did start feeling a bit slow towards the middle and the finale involved a battle sequence that dragged out a bit. That said, I appreciate seeing what that fight cost everyone, how it impacted them as people with disabilities, chronic illnesses and neurodiversity.

This focus on diverse characters is part of a theme of treating people with respect. Morgan and their housemates make a point of treating the ghosts as people rather than objects. Morgan's own difficulties with communication makes them well placed to understand that the ghosts' difficulties expressing themselves in a way that the living recognise doesn't make them somehow lesser; even if the ghosts don't seem to understand, it's not right to assume that's the case. The housemates do their best to communicate clearly with the ghosts, offering them choice and consent wherever possible.

Place is important to the ghosts in this book. While it seems they aren't necessarily tied to the place of their death, they do need a place to anchor themselves to. This is perhaps a little ironic, since I considered place a weakness of the book. The majority of work I've read from the author has been set in New Zealand. But while the seasonal references make it clear early on that the story's location was in the northern hemisphere, it took me a little while to work out that it was set in Britain. A reference to a ghost from the Civil War (I assumed US) threw me off and it wasn't until the characters started talking about pence and pounds that I finally figured it out. Beyond Cresswell Park itself, very little description is given of the landscape, nor does wildlife appear to ground things (though Morgan's kitten Mallard was a delight).

The plot also felt a bit underdeveloped in a few places. A necklace serves as a McGuffin, its One-Ring-like influence seeming to fluctuate as necessary for the story along with Morgan's psychic abilities. While all the pieces of the explanation are there for the most part, they felt flimsy.

Chapters of the story are also interspersed with the occasional interlude, mostly from the ghost Isobel's life centuries in the past. These interludes serve to explain some of what is going on in the present day. However, Isobel herself, while present, doesn't have much of a role to play in the current time. There are occasional glimpses of her on the fringe of things, which felt unsatisfying, given the vibrancy of the living characters and their relationships.

While I found the vibe of the story generally pretty cosy, it's not all sunshine and roses. The second half of the book introduces more spookiness, There's some unpleasantness that happens to a number of the ghosts and there's also a suicide attempt that takes place offscreen, but whose immediate aftermath is dealt with.

But on the whole, I very much enjoyed Sanctuary and am keen to see more stories like it. Given it's one of the first books out from Robot Dinosaur Press, a collective of queer SFF authors from around the world, I have high hopes this wish might be fulfilled.

Bonuses: +2 for a diverse cast with depth