Microreview [book]: The Bone Orchard by Sara A. Mueller

Political fantasy or thorough (and slightly literal) dissection of a character’s psyche… Why not both? 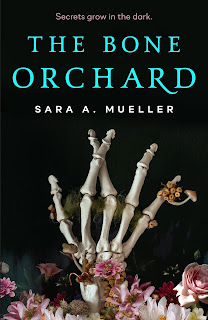 The first thing to say about The Bone Orchard is that it is really really weird. The second thing to say about it is that that is 100% a compliment. It’s the sort of weird where you have to keep reading – you are compelled to keep reading – because you need to understand what the heck is going on, right from the first page. It’s the sort of weird where you can’t even really begin to make guesses at what it all means, because you’ve not even really got a frame of reference to work from, so you just have to roll with it, let the weirdness wash over you, and accept that it’ll all make sense in the end (or it won’t) but you just need to enjoy the journey and you’ll get there when you get there.

Personally, I love that sort of weird. It’s the weirdness of Ninefox Gambit or Harrow the Ninth (while being very much unlike both of those books in a lot of ways), where the story isn’t interested in hand-holding you through any of it, and sometimes never gives you a satisfactory explanation to all your questions. It’s not hard sf, or a magic system akin to Brandon Sanderson, where everything can be neatly organised into a chart at the back, and understanding every little nuance might be key to understanding how the plot fits together. The Bone Orchard is more… just vibes. Again, this is a compliment. It’s hard to pull off that sort of story well, and I think Mueller has done a fabulous job of giving you just enough understanding to thoroughly suck you in and have you really want to hang on for the ride.

And part of how she does that, is that this is an intensely character focussed book – we reside very deeply in the head of, primarily, the main character Charm. Charm is the mistress to the Emperor of Borenguard, captured long ago during his conquest of an enemy state, and compelled, by magicky-science means, to obey his commands, even after his death. So when he dies by poison and orders her to find his murderer, prevent them sitting on his throne, and select a successor, she has no choice but to obey. Luckily, as well as being the imperial mistress, she runs something of a gentleman’s club, giving her access to many of the highest ranking men in the empire, including the imperial sons. She’s resourceful, clever and, as her name would indeed suggest, charming, and a delight to follow through her various tribulations, even when she makes decisions the reader might not like. She also has her closest helpers on hand to occasionally critique those decisions – her boneghosts, women in her distorted image she makes in her greenhouse laboratory, using the bones she grows on trees that go “clack clack clack” in her garden. Because Charm is gothy af and also, sort of, a necromancer.

And this is another thing the book does very well – a healthy disregard for the dividing line between science and magic in-world. We’ve got psychics, we’ve got necromancy, but we’ve also got brain surgery and artificial body growth vats full of spinal fluid. And those all sit very nicely alongside each other, partly because Mueller feels no need to justify that they do, and partly because the setting, inasmuch as it mirrors any part of the real world, is drawing inspiration from around the period of the Enlightenment, and it feels very true to that period to embrace the synthesis of what we would now consider science and the… less empirical aspects they were also happy to embrace at the time. It’s a period that’s less common to see in fantasy than “generic medieval Europe” and one that I think has a lot to offer with its rapidly changing world, without needing to stray too much into the more steampunk side of things – this isn’t the past but with extra tech bolted on, rather a view of something like the past seen through its own lens on the mechanics of the world around them. If this is set in a time like the Enlightenment, well, people then did entirely believe in what we would now consider magic, and did not think it sat unnaturally alongside what we would now call science. What better way to fully embrace that world-vibe than to incorporate that all-encompassing belief system into a fantasy reflex of the time?

It is also interesting that we’re given a slightly different point of view on the world than our usual options – Charm is a mistress and a madam, and the book is happy to explore the dualities and problems of her roles. We see the conflict between her feelings around the empire that destroyed her home – and the emperor who ordered it – and then her feelings about the place and life she has built for herself through his attentions. She is who she is because of him, she enjoys her position on the periphery of power, she even likes him, to an extent; at the same time, she is driven to vengeance for some of the hardships that empire has forced upon her and her people. We also see, mainly from her boneghosts – some of the cruelties of sex work in this kind of world, the realities of the transgressions powerless women can suffer in a world with power almost entirely in the hands of men. Mueller doesn’t shy away from the horribleness, even as the act of sex is not shown on the page – we see the aftermaths of violence in many forms, the physical healing and the mental scars. It’s not the focus of the book, but it isn’t something the reader can gloss over either.

Likewise, though we do not dwell on the acts of imperialism in the book – much of it is historical by the time the events of the story take place – when we do see them, Mueller is willing to cut right to the brutal, vicious point of the matter. War isn’t just a plot device. War is a far-reaching event that leaves its bitter remnants in the mind and heart of the characters that survive many years later, as well as the death toll it exacts.

For all the world is well-built, however, it is not that that kept me rapt with attention as I barrelled through the book, but the characters and their very particular problems. However, the problems the characters face slightly defy explanation. The nature of Charm’s self and psyche and who, what and how she is is a problem that takes the entire book to resolve, and cuts down right to the core of how the world and magic and science work. It’s not something to be experienced in a detached blurb, because watching it evolve naturally, wondering about it, is a significant part of the experience. Suffice it to say, it’s a book more concerned with the nature of the inner workings of a character’s personality than many I’ve read, and one that manages that sort of self interest extremely well, without letting it stray into excessive navel gazing.

It does mean, however, that it’s a book that lives and dies on whether you enjoy living in the main character’s mind, because so much of the rest of the book is framed through her perceptions and interests, and indelibly touched by her tone of voice. Luckily, Charm is a thoroughly fascinating character occupying a very interesting niche, so living inside her perception is a pretty fun place to be. It never bored me, and for all that I liked a lot of the secondary characters – Major Nathair could have their own entire book and I’d be thrilled – I never felt like I needed their perspectives, or that the book would be improved to look at things from another side.

The Bone Orchard has the high distinction of being both a pretty original book – I can think of parallels to some aspects of it but nothing quite like it – and one that absolutely carries off its own weird story into something wonderful and strange.

Bonuses: +1 for being just… really weird

Penalties: −1 for not giving one of the most interesting secondary characters enough page time