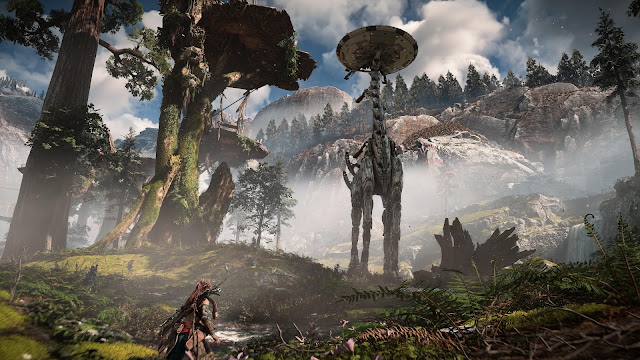 It’s been four years since the release of Horizon Zero Dawn and it seems that Guerrilla Games has learned a lot in that time. Almost every aspect of Forbidden West improves on Zero Dawn’s formula, from the gameplay to the side quests, from the animations to the visuals. Anything great in Zero Dawn is better here, and anything that wasn’t has gotten some love and attention paid to it. 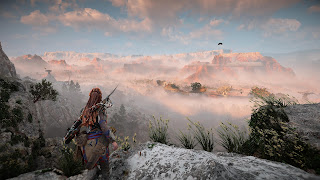 In Horizon Forbidden West, Aloy seeks to rid the land of a red blight that’s running rampant through all of the southwest. She discovers that the answers that she seeks may be further west and, never one to dawdle, takes action. Before the player is released into the open world, they are given missions in a smaller part of the map called the Daunt. This introductory sequence takes around eight to ten hours to complete. Suffice it to say, this is a big game.

Immediately upon starting the game I was astounded by Horizon’s graphical prowess. The detail is so incredible, from Aloy’s character model to the lush, vibrant flora, Forbidden West is a triumph in visual splendor. No detail was spared when creating this game’s textures and animations. This is probably the best-looking game I’ve seen yet. The special effects on every body of water are top tier, and each cauldron is vivid and striking. The underwater sections are vivid and teeming with life and make diving under the waves a complete treat. I can’t count how many times I said “wow” while playing, but I can count the number of times that I put the game into camera mode to take some pictures, and it was more than any other game I’ve played. 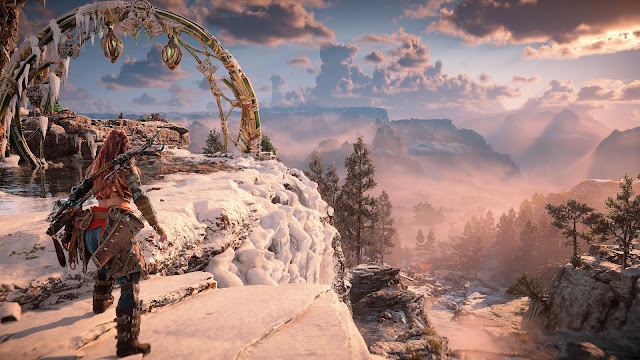 Many would argue that visuals aren’t that important, and for the most part, I agree. However, in Forbidden West, my opinion has been altered a bit. The visual fidelity and animations for each character in the game are intricately detailed. So much so that I’d argue that even many NPCs look better than the main character of many other games. The NPCs of errand quests have been given as much attention in this game as any of the main characters. In combination with the writing, this made each quest and errand even more engrossing than any other open-world action RPG that I’ve played. I’m sorry The Witcher 3, but I think your side quests have finally been topped (don’t worry though, yours are still amazing). 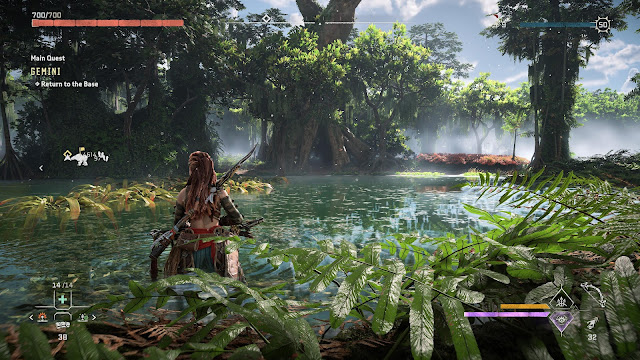 There are many side quests to do in the west, and most of them are well thought out. Zero Dawn had the problem of creating too many fetch quest side missions, but in Forbidden West, Guerrilla sidesteps this problem with better quest design and writing, creating a more natural flow to the game’s side activities. In doing this, the developers were able to explore sensitive material within their quests, and a more personal relationship between the player and the game’s characters. Many themes are explored throughout the game, including dealing with grief, dementia, and blindness, the internal conflict of family vs tribe, becoming whole after losing a limb, the burdens of leadership, living with and communicating with an autistic family member, and questioning and reevaluating one’s faith among others. These missions are acted out by a diverse and inclusive cast of characters, more so than any other game I’ve seen. 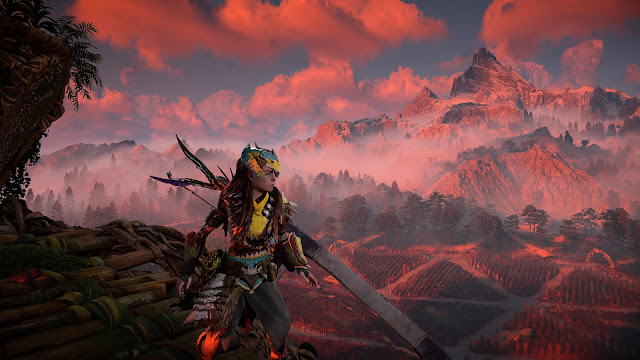 None of these side quests would be as strong without the characters that propel them, and the same is true of the main story. Aloy’s snark and disinterest in any romance thrown her way are still appealing, but it’s her friends that elevate and push her. Kotallo and Zo are two of my favorite personalities in the game. Zo, an Utaru gravesinger, brings peace to those in her final hours. But she is also a fierce warrior and protector of her people and of those she loves. Kotallo is a Tenakth marshall, a fighter through and through. He is reserved but is forthcoming with those he trusts and respects. He deals with a personal conflict that the player gets to help him through and watching his personal growth is one of my favorite parts of this game. This is not mentioning the ever-infectious positivity of Varl or Alva’s never-ending pursuit of knowledge. Aloy’s surrounding cast is a good bunch, though I’m still not sold on Erend. Of course, none of these characters would be as impactful if it weren’t for their voice actors. In addition to a plethora of fantastic performances, the dialogue is almost always on point (though there is some stilted dialogue here and there with awkward exit animations). The sound design outside of voice acting, including the wonderful score, compliments the visuals and performances at every turn. 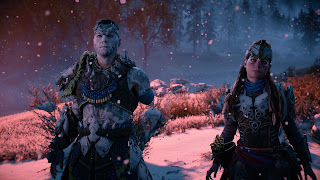 But what are all these wonderful animations and graphics and characters without good gameplay? Horizon Forbidden West stands tall here. The controls are tight, like the original game. There are a few new weapon and damage types as well, which add more variety to a player’s strategy. I particularly liked the spear thrower’s massive damage output despite its slow trajectory. High risk, high reward. My go-to was the warrior bow, useful in almost every situation. The resistance provided in the Dualsense’s adaptive triggers is great for bow and arrow gameplay and contributes greatly to the game’s feel on the controller. 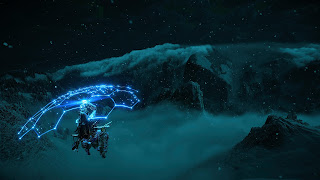 Though the game’s enemies are more aggressive than in Zero Dawn, Forbidden West has offered compensation. You can further upgrade your gear to increase concentration and Aloy’s increased melee ability to help offset this. Concentration slows time to let you get a better shot at your enemy and is an invaluable ability. Whereas Zero Dawn’s melee combat was unsatisfying and underdeveloped, Forbidden West has a much more robust, though not overly complex melee system. Melee is satisfying and works well for the most part, but there were a few instances where uneven ground made me miss my swings, and sometimes the combos don’t line up perfectly. Otherwise, jumping off of an enemy to shoot an activated resonator blast feels satisfying. In addition to stacking concentration and a superior melee system, six skill trees allow the player to upgrade Aloy as they see fit, and with enough playtime, every skill can be unlocked, so there’s no need to worry about being restrained to a single build. 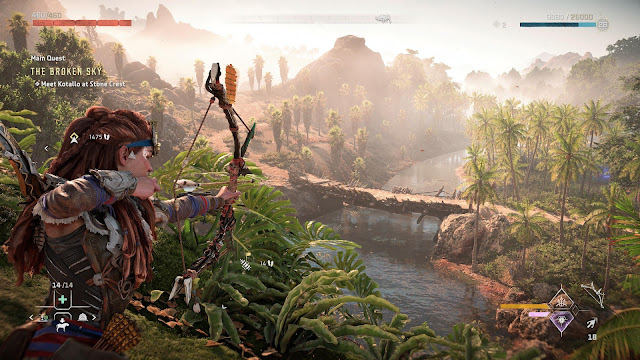 There are many new enemies in the game, like the Dreadwing and the Tremortusk (both of which are massive hulking machine-beasts). The design of each enemy is immaculate and gorgeous. It would be nice to look at them for a bit longer if they weren’t trying to rend the flesh from my bones, but I suppose that’s what photo mode is for. Like its predecessor, Forbidden West makes it just as enjoyable to systematically dismantle a machine for parts. Some parts are simply removed by shooting at them with tear arrows, while others require a certain part to stay intact. For instance, some machines’ weak points contain items that you need. You have to then avoid destroying that part and make sure it’s intact when downing a robot-dino. Some enemies are challenging, deciding between exploiting their weak spot for damage or machine parts is quite difficult. 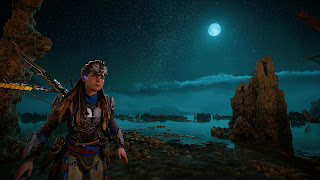 Though every aspect of the game has been elevated, the one area where players may differ in opinion is over the story. While by no means bad (it’s quite good in fact), it lacks the impact of the Project Zero Dawn reveal. The big moments in this game are better placed and more evenly spread out, though none quite reach the heights of the highest point of the original game. This is not a criticism so much as an observation. I prefer the overall pacing of the Forbidden West.

Though much of Horizon Forbidden West is an amazing experience, there are a few gripes that I’d like to see addressed in a sequel. For one, the jumping mechanic doesn’t always feel great. It can sometimes feel imprecise, causing me to miss jumps I know I should have made. There was also a weird animation that would sometimes occur on Aloy’s feet when she jumped they’d get all wonky before fixing themselves. Sometimes that uncanny valley rears its ugly head (usually with a character’s eyes when it does happen), though, for the most part, the art design is distinguished enough to avoid this. And while Aloy has increased climbing capabilities, I’d like to see even more. There were also a few moments when I had to reload a save because I’d encountered a glitch. It was more frustrating when I was doing a puzzle because I thought I just hadn’t figured out the puzzle yet, but it turned out something was amiss. And as mentioned previously, the melee could use a bit more fine-tuning, especially in the melee pits. Over my ninety-one hours with the game, however, these are small gripes. 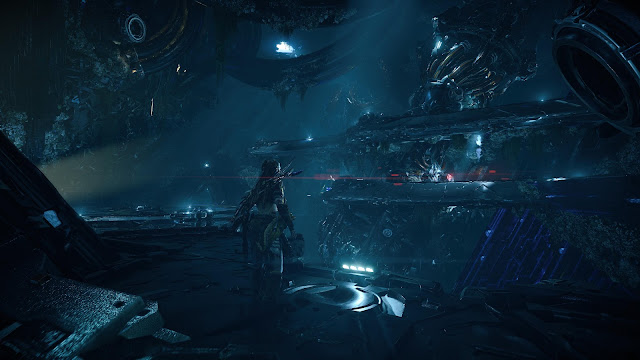 Horizon Forbidden West doesn’t necessarily do anything new in the gameplay space, but what it does, it does better than most of its contemporaries. Horizon picks from some of the best parts of all open-world games and makes them their own. From solving Tallneck puzzles to reveal parts of the map to sending the player on engrossing quests, Guerrilla has cherrypicked from the best of the best, and it shows. For anyone looking for an engaging, sci-fi action-adventure open-world RPG, stop. You’ve found it.
The Math
Objective Assessment: 9/10
Bonus: +1 for broad and inclusive cast of characters. +1 for improving on everything from the original. +1 for best in class visuals.
Penalties: -1 for making the best overide available at the end of story mode. -1 melee and jumping glitches. -1 for some occasional awkward animation/animation bugs.
Nerd Coefficient: 9/10
Posted by: Joe DelFranco - Fiction writer and lover of most things video games. On most days you can find him writing at his favorite spot in the little state of Rhode Island.
Posted by Joedelfranco at 12:00:00 AM