A comprehensive and realistic view of the future of the Internet, centered around a complex and well drawn protagonist. 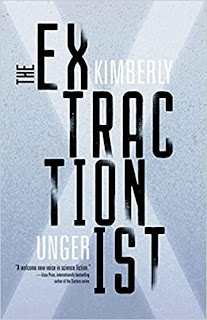 In the near future of Kimberly Unger’s The Extractionist, our current Internet has evolved into a more complicated, and dangerous place, the Swim. The march of technology has provided for a lot of new ways to interact with that technology for ordinary people, and as always, for those on the bleeding edge. Eliza McKay is on that bleeding edge, with a rare and dangerous XWire setup in her brain that gives her an immersive connection to the data of the Swim that few can match. Few would, because Xwire installations can cause psychosis, or worse.

For all of those skills and equipment, though, McKay  is on the margins of the technosphere, banned from doing most of what she has trained and studied and is rather good at. What McKay is doing these days is rescuing people who cannot extract themselves from virtual worlds and for various reasons simply can’t be unplugged. But when a government agency hires McKay, currently in Singapore, for such an operation, McKay finds herself caught in the middle of a story of corporate ambition, government surveillance, greed, and a lurking threat in the Swim.

McKay is the titular Extractionist.

Predicting the future of the internet or any technology is a tricky business. At best one can predict and describe a plausible future internet, given trends, technology, and human nature. Plausibility, and providing an Internet that provides the capacity for story are key to writing a story using a future iteration of current technology.  That so, it was inevitable that I kept thinking of previous genre works. Given McKay’s experimental technology and her deep connections to it and the Swim, it is natural to think of cyberpunk and cyberpunk novels, particularly. Given that there is one friendly AI and antagonist ones as well, Vernor Vinge’s True Names came to mind much more than, say, Neuromancer, because we don’t quite have the dystopian background of the latter in the world building of this novel. A more obscure connection I think also may go to Web of Angels by John Ford. While I don’t know if the author has read the novel (sadly, it is long out of print), the concept of Gailer as a Webspinner does connect with what McKay can do, which are both outside the bounds of what should be and have the potential to upend a lot of apple carts if fully manifested.

The technology in the novel goes beyond the Swim, though. There is a lot of speculation and invention involving devices in the real world, particularly nanotech, in the form of “bots”. These bots are a ubiquitous feature of Unger’s digital figure and landscape and are much like, say, a wifi signal today. One expects bots in this world to be everywhere, and Unger has some clever ideas on how they could be used on a day to day basis as well as for malfeasance and the bleeding edge of what’s possible in her future world. Between the bots and Xwire and other ways to connect to the Swim, the novel spends a lot of time thinking about levels of technology, who has access to it and what they do with it. Indeed, the “Street” does find its own uses for Technology in Unger’s world.

Early on, I had wondered why people could not simply be "unplugged" from the Swim. Instead of a relatively unrealistic "this would kill the person" sort of answer, instead, Unger uses an approach that reminded me of David Brin's Kiln People, except the alternate people are virtual beings whose later memories are incorporated into one's own. So, an unplugging from the Swim would work, but that lack of integration of memories could mean anything learned in the Swim would be lost. For many people, that's no big deal, but say, for a corporate spy or a government agent, the information is the crucial thing. So, McKay's skills find more use and a niche in this society. I also thought of the modern internet--imagining losing all of your stored emails or your twitter followers or the groups on Facebook you follow. You could reconstruct some of that, but the loss would be bitter.

As far as McKay herself as a character, I am going to turn to another genre work, a genre character as a point of reference for how I saw her, and that would be Dominic from INCEPTION. Like Dominic, McKay does not have an outlet for a lot of her skills and so has to make do with a series of marginal jobs. The novel opening with her away from her home in San Francisco and instead in Singapore reinforced that for me. Although unlike Dominic she is not banned from the United States for fear of arrest, she is under a ban for most of her work, and is constantly seeking to avoid notice by the government  And, like Dominic, she is seeking a way to get back into good graces so she can do her craft again.  And she has connections and longtime relationships that she draws upon for the “big score” that, if she plays her cards right, will give her all that she wants, just like Dominic, with the same high risk as well.

But like her previous novel, Nucleation, the novel is strongest when we play with the technology, and not as strong when it is in more straightforward technothriller realms. However, given how immersive and ubiquitous the Swim is, and given the bleeding edge of McKay’s technology and its uses, this means that the technothriller elements are much more infused with that technology, and so, for me, they come off much better and much smoother than her previous novel. As mentioned above, the author’s strengths are in technology and the extrapolation of technological trends, and what people will do with that technology more than action beats. So the beats here, so infused with that technology and its uses (and misuses) came off much smoother for me this time around.

If there is a weakness for me for this novel, and it is something Nucleation didn’t have to deal with because it was so bottled, but this novel does have scenes on two sides of the Pacific, is a lack of consideration or extrapolation of how the world is doing besides the march of technology. Especially given how McKay is wrapped up with a government agency, and such concerns would affect someone in her position and her forced-into-profession of an Extractionist for hire, sometimes globally, the world outside the technological world portions at best static and at worst, a cypher. I think a big opportunity for a fully formed future was missed, here.

Ultimately, The Extractionist is a successful second novel that builds on the author’s first and is in good conversation with previous novels exploring this space. It’s hard to write near future SF, to the point that authors I know actively avoid it. Unger, however, is continually ready to dive into it, and I am very interested in seeing what she will do next.

Bonuses: +1 for very strong extrapolation and presentation of future technology, including the “Swim”

+1 for a well rounded and complicated central character with a fully realized past, present and future.

Penalties -1 for too light of a touch on extrapolation of the future beyond the technological.