Rune’s past, present, and the potential of his future combine for a literal fight against Time. 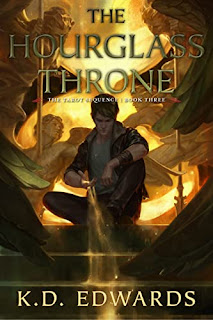 Rune St John has been through a lot in the Tarot Sequence so far. Last Scion of a fallen House on the Island of New Atlantis (the island formerly known as Nantucket), he and his inseparable Companion Brand have gone from near rags to literal riches, fighting to restore the House of Sun to full flower. But even as both are coming to terms with the challenges of a House restored, New Atlantis is rocked to the core by a scion of a House long thought gone and their dangerous magics long since forgotten--the power to manipulate Time itself.

The Hourglass Throne is the third in the Tarot Sequence series.

It has been a pleasure to watch what has changed, what has evolved, and what has changed over the first three novels.. This is both internally and on a metatextual level as well. As a writer, Edwards started with a promising debut novel, The Last Sun, and expanded on and developed that potential in the second novel, The Hanged Man. The Last Sun featured a Rune and Brand at frankly their lowest point, living on the margins of New Atlantis society, working smarter as well as harder to try and make their way. The Hanged Man showed Rune with some more respect and power and authority...and more to protect, and forced to deal with some rather nasty opposition seemingly ready to strip away what little he had accumulated. The slow spiral of power and authority and social rank spiral up together with the writer skillfully bringing new and larger challenges for Rune and Brand to face.

And yet, for all of that, many things remain constant and the same and should. The tight, intimate Companion bond with Brand continues to be one of the best things in the entire series to read. Falling into their banter and relationship was like meeting two old friends once more and I rediscovered and reified my delight with them as characters. Also remaining constant and in the forefront is the novel and world’s commitment to being a world where people’s sexuality and gender identities are free to be what they want to be, to be what they truly are. The novel (like its predecessors) do not venture beyond the bounds of New Atlantis to America and elsewhere, so we don’t know if the rest of the world is less benighted than our world can be in such matters, but in New Atlantis, Rune’s relationship with Addam, with Ciaran’s genderfluidity, and other hallmarks of diversity (gender and race particularly) are unmistakably front and center. I might be a straight as an arrow white guy, but New Atlantis is the sort of world that I want stories in, as an expected default.

There are really interesting parallels and resonances with the previous first two novels, and also shows how Rune has changed between the three novels. In the first novel, the opening is Rune raiding the Heart Throne with a shoestring team of people of similar power levels, for relatively low personal stakes. The Hanged Man features a set piece with Rune and Arcana taking on the holding of a stolen battleship, Rune clearly outpowered by his fellow Arcana but scrappy and inventive in order to punch in their weight class. Here, in this third third novel, early on, Rune is point man investigating something going very wrong at a rejuvenation clinic. He has an array of sigils, backup and is a valued and considered member of the team. Rune has come a long way thus far, but the excellently plotted and described action sequences, even as they’ve leveled up in power and danger, are as always well executed and described. There has been an evolution in the level of those threats, and the quality of the writing keeps the threats and the combats and conflicts on scale and blocking we can not only comprehend, but we can follow. But the real joy for me was to see how scrappy Rune has had to transfer that cleverness to higher level threats.

I am keeping the nature of the antagonist oblique as possible because part of the joy in the novel is the uncovering of the antagonist, the source of their power, and their goals. How that antagonist connects with previous episodes in Rune’s life and draws that together is well done at all. The threat to Rune, to New Atlantis in general, is quite real, and Rune’s confrontation with that threat, and the costs it has to make that happen, are high.

The novel is a major milestone in Rune’s life. It is part of a long sequence that is exploring Rune and Atlantis. That said, we get some really key answers and pieces to the puzzle of Rune and Brand’s life. Primarily and very particularly, we dig deeply into the Inciting Incident of Rune’s life--the fall of the Sun House and the death of his father. That Fall is definitely a source of trauma, and Rune having to engage and with and process his own feelings, and even role in that drama is a strong and abiding thread in the book for reasons that would be highly spoilery. We’ve seen Rune at his most hardscrabble, we see Rune as up and coming, and we see Rune come into his own in The Hourglass Throne. However, with all of that, Rune remains Rune and having to deal with the shadows of his past that cover him still and how he has to come to terms with that is a dark but necessary strand. Although seeing Rune go through the wringer is sometimes tough, it provides a completion of the character’s arc and their story going back to before the first scene of the first novel.

Is everything perfect? No, I think a couple of the consequences of the denouement aren’t quite highlighted enough, especially given the costs of what it takes to defeat the antagonist and their plans. Also, while Edwards does a really good job in tying in the first book and its raw Rune at his lowest to this book, the second book feels slightly more of a sidequest, retrospectively and I think some more connective material between second and this one. Perhaps future volumes will help backfill that a little. These are episodes in Rune’s life, after all, and a deep exploration into his life. A marathon, not a sprint.

Rune winds up with what in romance terms is a Happy For Now (HFN) in this third book in the series.. It’s clear that part of Rune’s arc is complete, but his life is definitely not over, and there is much more to see and say and learn about him. That said, this is a series that is providing forward momentum and not stinting on growing and developing its protagonist and the people around him. Rune St. John has come a long way from the hardscrabble outcast brought in on an operation by Lord Tower, he is a Power in his own right now, and that will bring a whole new set of concerns and problems for him to face. I have strongly enjoyed Rune and Brand’s journey thus far and where it will go next.
The Math

+1 for vivid and relatable characters

+1 for good development and real consequences and growth in the characters and the world.

Penalties: -1 for some of the consequences ot the denouement not quite explored well enough in my opinion