'Spider-Man: No Way Home' is a well-oiled nostalgia machine, and little else 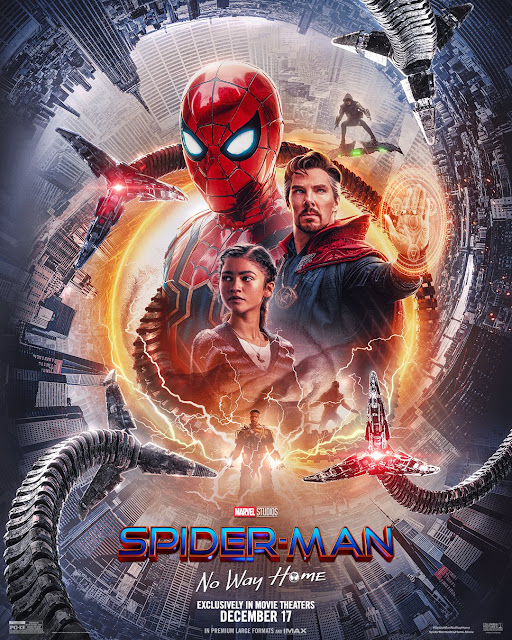 As self-congratulatory sequels go, Spider-Man: No Way Home is adequately acceptable. Hell knows this year has seen much, much worse instances; at least this one has some respect for its audience and follows believable emotional arcs, even if it blatantly feeds on the goodwill earned by other productions and ends with a massive reset button. It's not terrible, and it's not terrific. It's OK.

This movie makes a curious choice of conflict. After illusionist villain Mysterio divulged Spider-Man's identity at the end of Far from Home, Peter Parker's life has become a mess of unwanted celebrity, constant public scrutiny, loss of privacy, and unpleasant consequences for everyone in his sphere. So Peter asks his friend Doctor Strange to remove that bit of information from everyone's head. What he needs to defeat this time is not an enemy, but a vulnerability that invites enemies. He doesn't have the infinite money that helped Tony Stark maintain a comfortably protected life after revealing his identity.

Oddly, even without infinite money, the rest of the Avengers have had no issue with being publicly known. The MCU, as a rule, has avoided superhero secret identities, a choice that has been both praised and criticized. So it's a detour for the MCU to devote an entire movie to have a hero struggle with being known to everyone. It would have been very interesting to see Peter deal with the legal aftermath of his exposure (since they were going to have a certain lawyer drop in anyway), or to see him try to adapt to life under the public eye (a fun meta story to watch for a character who's literally dating Zendaya). However, an entire movie devoted to Peter's mundane problems would have had fewer explosions. After the rather perfunctory procession through the plot beats we already knew from the trailers, including Peter going through the motions of legal trouble and then breaking Doctor Strange's concentration during a mindwiping ritual, No Way Home only really starts when Doctor Strange invents a shiny MacGuffin to banish Spider-Man's enemies that have magically appeared from other movies. The justification for the transdimensional shenanigans is that the spell was targeted at everyone who knew Peter's secret.

This is a way to bring your cake from another universe and eat it too. The MCU version of Spider-Man has run into a peculiar villain problem in that our hero was left to clean the messes left by Iron Man instead of fighting his own villains. Spider-Man has an iconic gallery of enemies; however, the two previous franchises had already used the best of them, and done so in ways that are hard to compete with. How can you bring Doctor Octopus and the Lizard and the Sandman into the MCU without inviting comparison with the performances that defined an era of superhero cinema?

So, after they're made their respective entrances, and Doctor Strange has resolved to kick them back to their own movies, Peter's crucial choice is to steal the MacGuffin and try to save his enemies instead of sending them back to the deaths that await them. Essentially, Peter's mission is to rewrite the endings of five other movies. From this point on, No Way Home slows down its second act to milk every available joke and memeable moment out of its multiversal baddiepalooza, because it knows we won't have another chance to spend time with this Green Goblin or this Electro. This "now or never" spirit, mixed with the dangerous "go back and fix it" attitude in the third act, makes No Way Home share many of the problems with nostalgic sequels. This is not only a team-up movie; it's a team-up between separate iterations of the character going back to 2002, which explains why actor Tom Holland describes it as a bigger crossover than Avengers: Endgame. It's an understandable sentiment, but also a bold one to make when Into the Spider-Verse already exists.

No Way Home not only pays tribute to two decades of Spider-Man movies, but to the entire slate of productions associated with Marvel Comics: its choice of final battlefield is the Statue of Liberty, memorably used in the original X-Men, the movie that paved the way for the entire superhero craze we're still living through. However, there's fan service, and then there's fan servitude. No Way Home is full of small moments that feel like ticking off boxes in fan wishlists, although it at least knows how to use its cheap nostalgia effectively. You'll recall that the shot of MJ falling in the trailer brought up comparisons to Gwen's fall in the Andrew Garfield movies. The way MJ's fall is resolved here is transparently manipulative (even if it punches you right in the feels).

Tom Holland is 25 years old, but he's still playing a high school senior about to enter college. Accordingly, the MCU has continued to treat Peter as a kid, even going to the length of freezing his age for five years in-universe. Keeping Peter from growing up diminishes the emotional depth his movies are equipped to handle. Asking a wizard friend to fix everything by inchanting "Returnus to Normalus!" is a facepalmably childish choice, one that No Way Home at first condemns, but ends up vindicating.

This is less its own movie than a step in the integration of multiverse characters into the MCU. This is a pattern that has plagued Phase 4. WandaVision forgot about its own themes because it needed to set up The Marvels; Black Widow only existed to explain a minor character's presence in Hawkeye; Falcon and the Winter Soldier is a skippable prologue to Captain America 4. By not letting each movie be its own thing, Marvel has forgotten how to create complete stories. No Way Home is not here to explore how Peter Parker deals with crisis, or to follow him in a journey toward maturity, or to give us a full emotional experience, but to provide backstory for Doctor Strange in the Multiverse of Madness (coming soon! only in theaters!). It's a very mechanical method of storytelling that robs stories of their meaning.

A possible reading of this movie is that Sony is afraid of losing the cash cow it's found in Tom Holland, and it deals with that anxiety by leaning on its two previous attempts. Spider-Man has been reset two times already; it's like Sony wants to preempt that risk by doing its own reset of Peter's story (and, in an incongruous move that negates the emotional growth of the previous movies, a perfect reset of every villain to their pre-villain status). This is a failure to understand the nature of storytelling, which is also noticeable in how No Way Home is obsessed with erasing ambiguity. The already canceled Spider-Man franchises are momentarily brought back from cancelation, and No Way Home refuses to let go of them until it's done reassuring us that their respective universes have happy endings now. Don't wonder any longer what happened afterwards: here, let us tell you exactly how it ended.

This is the problem at the core of Spider-Man: No Way Home: it sacrifices its own story because its actual function is to prepare the upcoming ones and forbid any ill talk of the earlier ones. We should have taken a lesson from MJ: expect to be disappointed, and you won't have to be.

Bonuses: +1 for organically integrating the nostalgic string-pulling into the plot, +1 for visually dazzling fight scenes (except for the last one, which is a confusing mess).

Penalties: −1 for jokes that go on for too long, −1 for wasting five major villains in a movie that is not really about any of them, −1 for not having any solid theme to explore regarding Peter's character growth (and no, the "great power" line is a catchphrase, not a theme).