Thirteen short stories by Chinese writers, available in English for the first time 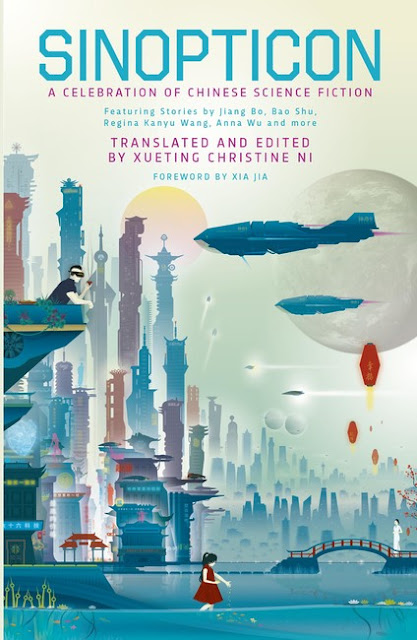 These days it may feel like Chinese science fiction has suddenly exploded onto the scene, but the truth is that Chinese writers have been working with science fiction for a long time; we just didn't have access to the texts from here. Editor and translator Xueting Christine Ni has endeavored to help remedy our ignorance with the stories she chose for this collection.

One can sympathize with the foreword by Xia Jia, who confesses, "I cannot help but be moved by the thought of those who had read bad translations, and were compelled to doing the job better themselves." In that spirit, Sinopticon (what a great title!) is a meticulously curated selection of old and new stories made available here to introduce English-reading audiences to the wealth of literature that has been and continues to be produced in this genre.

The Last Save by Gu Shi, about a subscription service that lets people reload their lives from a previous save point every time they don't like a turn of events, chooses a domestic incident to focus on, but allows a terrifying glimpse into the anxiety of infinite choice, the pressure of expectations of achievement, and the loneliness of those left behind in each timeline when someone opts out.

He would always have to choose, again and again—correcting his
mistakes, correcting all contradictions—to attain a perfect life.

Tombs of the Universe by Han Song is made of two first-person narratives: one by a man fascinated with visiting astronaut cemeteries on deserted planets, and another by a veteran gravemaker reflecting on his trade and the cultural effect of burial customs in the space age. The two stories are only indirectly connected, but they both speak to humanity's complicated relationship with memory, legacy, and our inescapable finiteness.

Perhaps we no longer think the past is important. Has
it become something we don't have time to remember?

Qiankun and Alex by Hao Jingfang, about a world-spanning AI tasked with learning to choose its own goals from observing children, is a curiously small version of an event we're used to seeing develop on a much larger scale in Western science fiction. In this story, the AI learns by watching how a child learns. Perhaps an analogous process is meant to take place: we may learn from this story to think differently about real AIs by reading about how this fictional one learns.

He knows all there is to know, better than anyone else, but
has never considered acquiring data he doesn't already have.

Cat's Chance in Hell by Nian Yu, about a wounded soldier trying to make it back home from his final mission across robot territory, suggests a cautionary scenario of the creative ways war can find to persist in its inhumanity.

Haven't things always been like this? Which soldier isn't a pawn
in a bigger game? Not to mention those who are less than pawns...

The Return of Adam by Wang Jinkang, about a society transformed by electronic enhancement of the human brain, comes from an earlier era of science fiction, and it shows: it employs the technique of the traveler who arrives in the far future and has to sit for helpful explanations of how the world works. It also suffers from too much gratuitous nudity and an uncomfortable stance on eugenics.

"You could say that machines have borrowed human bodies, and
with the aid of the human brain, have occupied Earth; and we are
like idiotic moths, incubating their larvae with our own bodies."

Rendezvous: 1937 by Zhao Haihong, about a time traveler sent to find evidence of local resistance during the Nanjing Massacre, but also about the clash between a character and her author, is a metafictional confession of the difficulty of writing about the horrors of history.

My stomach clenches, my eyes screw shut, but I
force them open—I must see and bear witness.

The Heart of the Museum by Tang Fei, about a child's bodyguard who secretly belongs to an alien species able to experience the past and the future, is not only an enthralling meditation on the limits of human perception and our need for physical markers of our presence in the world, but also a precious example of the narrative possibilities opened by the timeless grammar of Chinese.

Rather than a short straight line, my life can better
be described as an eternal point in the chaos of
time and space. My future will never disappear.

The Great Migration by Ma Boyong, about the chaotic process to get spaceship tickets from Mars to Earth during the biennial close approach, is at times hilarious in its sense of hopeless absurdity and at times tiresome to read. That's probably the point: to convey the protagonist's sense of irritation at comically worsening events that don't move fast enough. However, the story is hindered by the repeated objectification of its female characters.

It was in these doldrums that the Great Migration
bared its sinister sharp teeth. Its knives were now
dulled, roughly sawing at our flesh and blood.

Meisje met de Parel by Anna Wu, about a temporal paradox related to the origin of a portrait, is an exquisitely written love letter to the link between science and art, and a bittersweet reminder of the hard reality of temporal existence.

I was troubled to think that the girl in the painting
was me, but a strong curiosity compelled me to
wade through the mist of time and find you.

Flower of the Other Shore by A Que, about a zombie's journey to take his former girlfriend, a human, to safety, presents an unexpected reversal of the zombie story: this time, we have access to his inner thoughts, his hopes, his attempts to remember, and even his self-aware sense of humor. It's always noteworthy when a story dares (and manages) to make us feel empathy for those we're used to calling mindless monsters, but this entry is also important in that it merges zombie lore with Chinese myth.

"Might be a good thing. No brain, no worries."

The Absolution Experiment by Bao Shu is so fantastically stunning that I won't give away any details. Suffice it to say that it has a Twilight Zone vibe in how the protagonist's assumptions are perversely turned on their head. Instead of ruining the reveal, I'll quote from the translator's note:

The Tide of Moon City by Regina Kanyu Wang, about a binary planet system where an academic exchange turns romantic and then political, connects in surprising and heartbreaking ways an ancient Chinese legend of forbidden love with the international tensions that sometimes beset scientific cooperation between China and the West.

Every dusk, every dawn, he would stand somewhere facing Lunar
Side on He'lin, looking up at the sky, listening to the tide hitting
the shores, and imagine Dianne looking towards him from He'lin.

Starship: Library by Jiang Bo, a series of connected episodes about a robot librarian determined to preserve her collection of knowledge despite humankind's indifference, is a fitting choice to end the anthology with. If we are to make it until the end of the universe, books will be our salvation.

Ehuang turned her head, and saw the entire heavens
inundated with stars. Her mind was made up.

After reading this collection, the only regret that remains in the reader's mind is that it did not contain more stories. Sinopticon is a small but bright window into a fertile tradition that demands and deserves to be better known outside of China. We can only hope that more books like this will come.

Bonuses: +2 for Ni's introduction, which provides a brief yet quite informative overview of the current state of science fiction in China. She also adds little notes at the end of each story, where she adds relevant cultural clues that enrich the reader's comprehension.