Nerds of a Feather are expanding our flock, and we have three new contributors to welcome this week!

Roseanna is the humble servant of a very loud cat, but finds time around that to consume and then have opinions about SFF (which she’s been doing for as long as she can remember, but quietly blogging about since 2012). She’s never quite managed to escape from her classics degree, and so can often be found reading things with Greek gods in and then grumbling about them to her long-suffering partner. She also plays rugby, morris dances, board games, quizzes, dabbles in tabletop rpg and really really likes bread. 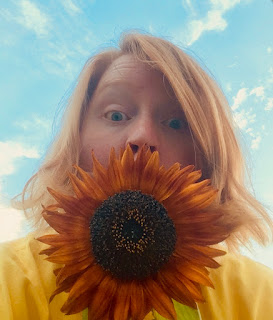 MY PET PEEVES IN NERD-DOM ARE: Treating mythology as if it’s always unambiguously fantasy, books that are all setting/cool idea but flat characters/bad prose, being unable to tell if a book has been labelled YA just because the author is a woman or because it’s actually YA

VAMPIRES, WEREWOLVES, ZOMBIES, ALIENS OR ROBOTS: Vampires all the way, since childhood and forever. Vampires are just cool.

RIGHT NOW I'M READING: About eight different things, but primarily rereading The Once and Future King and re-listening to Gideon the Ninth, which is super interesting with the different cadences to how I read them in my own head from the paper-book the first time.

...AND A COUPLE BOOKS I RECENTLY FINISHED ARE: DIE volume 4 (amazing); Terciel and Elinor (extremely nostalgic for the Old Kingdom); Clock, Star, Rose, Spine (beautiful poetry, and surprisingly the first explicitly SFF poetry I’ve read as an adult… I feel like there ought to be loads more of that); Paladin’s Hope (because T. Kingfisher’s paladins are always wonderful).

NEXT TWO ON QUEUE ARE: Iron Widow, because I’ve heard some really interesting things about it… but also the cover art is just really pretty; Lore Olympus, because what I need in my life is about my fortieth Greek myth retelling

WHEN THE WEATHER SUCKS OUTSIDE I'M MOST LIKELY TO BE... Playing Dragon Age (again), playing rugby (somehow better when it’s wet and rainy – the ground is nice and soft), trying to get the cat not to sit on the book I’m reading

MY FAVORITE SUPERHERO AND SUPER-VILLAIN ARE:  This is super difficult. Partly because I’m boring, and I like the goody-two-shoes, uncomplicated heroes like Wonderwoman (although the recent films have made her a bit more rounded) and Superman. And partly because this means I don’t tend to super identify with the villains. If I had to pick, I like Harley Quinn, especially after seeing Margot Robbie’s version of her in Birds of a Feather, but I’m also a little partial to Magneto (mainly because I love Ian McKellan – who doesn’t?).

IF I WERE A SUPERHERO/VILLAIN, MY POWER WOULD BE: Controlling fire. You always get a bit typecast as a red-head for the visuals, but honestly, I think this really fits for me… and it’s just extremely cool.

THE BEST COMIC FILM OF THE PAST 5 YEARS IS: The Old Guard was astonishingly good, to the point I immediately went out and bought the two trades of it to read as well. It’s one of my favourite comics I’ve read this year (which is saying something, considering there’s been DIE and Once & Future updates).

THE WORST COMIC FILM OF THE PAST 5 YEARS IS: Captain America Civil War. I could write a whole essay about what was wrong with this film for me, but it would probably boil down to “oversight isn’t bad”. It was an interesting idea that I think they did from totally the wrong side.

I JUST WATCHED Green Knight AND IT WAS AWESOME: ...which is weird because it’s basically a film without a plot (or barely any), but it is so intensely atmospheric, it doesn’t matter.

I JUST WATCHED Loki AND IT WAS TERRIBLE. Aside from anything else, it didn’t actually feel like he was behaving… like Loki? It confused me a lot.

EVERYONE SHOULD SEE Green Knight BEFORE IT'S TOO LATE, (again, because it was that good)

BEST SCIENCE/SPECULATIVE FICTION SHOW OF THE PAST 10 YEARS: She-Ra and the Princesses of Power. Does this count as SF? I hope it does, because it was glorious. I woke up early to watch the last season when it dropped on Netflix, so I could yell about it with my friend. It’s the sort of tv show I wish had been around when I was a child, because so much about it is perfect and I would have definitely appreciated a lot of the threads running through it.

NAME A BOOK  YOU *NEED* A MOVIE OF (OR VICE VERSA): Sabriel, although part of me worries that if they did make it, I’d end up not liking it because I love the book that bit too much. It was a really big one in my childhood, and I still go back and read one of the later chapters of book three when I’m sad and need perking up. But it also one I think you could make very visually arresting – Garth Nix is great at conjuring up a sense of place – and I would love to see that translated to screen.