Microreview: Seven Deaths of an Empire by G R Matthews

G R Matthews Seven Deaths of an Empire features the story of a magician, a general, and a Roman Empire like polity on the edge of a precipice after an Emperor's Death. 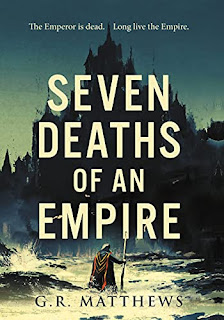 General Bordan has a problem. The Emperor has just died, fighting in the borderlands of the Empire. The remaining  members of the imperial family are under stress, the nobles of the Empire are circling and the church is also scheming. Bordan is loyal to an Empire that is not at a moment of strength. In fact, it is a crossroads, if not a precipice.

Apprentice Kyron has a problem, too. He’s out in those borderlands and has been chosen, along with his magical master and an honor guard of troops to bring back the body of the Emperor back to the capital. It’s going to be a rather dangerous journey through country that is supposedly loyal to the Empire, but perhaps not quite as loyal as it might be.  And in this Empire, possession of the body of the Emperor is much more than nine tenths of the law...

It is the stories of Bordan and Kyron that are at the center of G R Matthews Seven Deaths of an Empire.

The worldbuilding of the novel attracted me right off. The titular Empire is very explicitly modeled on the Roman Empire in some of the gross and small details alike. Legions and pugios, an Empire pushing into the woods against barbarians, these large scale details are reminiscent of a still growing Roman Empire. As I read further and on, I saw the differences that Matthews layered into his empire. First off, and most importantly for the plot, there is magic. Magic is an art in the empire that has taken a shellacking as of late (for reasons to be discussed shortly), but one of our two main characters, Kyron, is a magician in training and so through him we get the throughline of understanding the role of magic in the empire and more pertinently in the army as well. We get a good look at the role of combat magic, and it is vividly and excitingly described and executed, all the more so because Kyron is NOT a master and is often fumbling his way through it all.

The other major difference though between the Roman Empire and the Empire of this novel is the rule and role of religion. In our own real Roman Empire, Rome was a medley of faiths and gods and beliefs in a quite bewildering variety. The ancient Roman customs had been fused to the Greek Olympian deities, but then there were traditions such as Household Gods, Vestal Virgins, and other local beliefs. And then, given that Rome was an empire, and a polyglot one at that, Rome imported Gods and cults from Britain, Asia Minor, Germany and beyond. Before the rise of Christianity (itself once just one cult imported in), religion was one of the most complicated things in the Roman Empire.  Matthews eschews that in his book, and deviates perhaps the most from his Roman Empire model. His religion, the Cult of the Eternal Fire, is instead modeled on an Inquisition-era Christianity, and is intolerant of not only any other expression of religion, but magic as well.  This inquisition is growing in political strength and power and has ideas of its own how the Empire should go forward.

For all of this grand worldbuilding, however, and large scale canvas, the twin entwined stories that Matthews seeks to tell here are surprisingly intimate and small scale. The focus of events in the alternating chapters of both Kyron and Bordan do contain battles, political intrigues, sharp events and a turn the page sort of flow, but the scope of the events on the page are narrow, giving us a chance to see both men in full measure and they stand above and beyond all of the other characters and settings. It seems almost deliberate, then that many of the details we see are strangely generic. This is a book where there are meals and dinners, but the fruits are not described in the detail in, say, a L.E. Modesitt book. Too, a lot of locations have a level of description that is fine, but there is a lack of place names for many of them. This does have the effect of blurring a lot of that and focusing on the main plot and the characters.

The plotting, intrigue and adventure of the story of Bordan and Kyron is where the novel truly shines. There is an additional strand at the beginning of each chapter, a short paragraph starting with 10 years ago, and slowly approaching the present. It's an excellent way to slowly tease out a backstory for Kyron that would otherwise be presented in an indigestible lump, and it helps keep the story flowing and letting the reader knit the story of Kyron together.

Beyond that, Kyron’s relationship with his master, Padarn, and with Emlyn, the local guide and warrior woman who is tasked with protecting him, provide further fleshing out and color for Kyron.  While Padarn does come off a lot like a more generic master of magic, Emlyn is a more complicated figure. She is not a romantic figure (I was waiting for that cliche and it did not occur) but rather her story and how it relates to Kyron, and the legions tie in and make real and personal the themes of imperialism that are more at a remove in Bordan’s section.  Even more than Bordan, you see, Kyron  is really the protagonist and hero of the story but given his relationship with Bordan, and the importance of Bordan makes this novel complete. I can imagine a novel where everything is from Kyron’s point of view, a much bloodier and narrowly focused book. I think it could work.

But Bordan’s story at the center of the empire, seeing the political machinations first hand, provides balance to Kyron’s story of fighting through the wilderness. While it is equal in the number of chapters, it feels just a little colder than Kyron’s story, but it is essential to understand the rot coming at the heart of the Empire. Kyron, through Emlyn, can see the problems of Empire on the ground, but Bordan, as he fights and fights to keep the Empire together, shows just how rotten it is, and provides a line to his characterization that is not complex but straight and clear. Is it a good thing to fight for an institution that is rotten at its core--so much so that Bordan cannot but help see it? Is the Empire worth saving, or are the titular Seven Deaths merely the prelude to dissolution?  There are no easy answers here in Matthews book, and the themes of imperialism, power, succession and right action resonate throughout its pages.

The novel is the first in a series, I look forward to what Matthews does in subsequent volumes, but I do hope the aforementioned genericity of details might be changed to something more vivid in them.

Bonuses : +1 for a strong pair of protagonists.

+1 for a good exploration of the theme of Imperialism in a non medieval European based fantasy setting.

Penalties: -1 Some missed opportunities in description and detail