Today we welcome the second of three new contributors to the flock!

Joseph DelFranco aka Joe D enjoys spending time thinking of questions that cause uncertainty in others, after all, what is life without a little introspection? When he isn't causing existential crises, he likes to play a breadth of video game genres and read a wide variety of books from mythology and fantasy to sci-fi and political. Oh, and he writes sometimes. 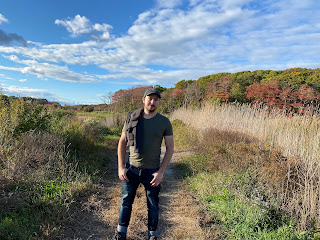 SECRET UNDISCLOSED LOCATION: Westerly, Rhode Island (Come check out Savoy Bookshop/Cafe if you're in the area!)

NERD SPECIALIZATION(S): Video Games. I also read every day, but I read a little of everything so I can’t say any specific genre is a specialization.

MY PET PEEVES IN NERD-DOM ARE: Video games with awful cutscenes or games that insert story just to have one.

VAMPIRES, WEREWOLVES, ZOMBIES, ALIENS OR ROBOTS: This is tough. Probably aliens due less restrictions in expectation.

RIGHT NOW I'M READING: The Song of Achilles by Madeline Miller and I may re-read The Lord of the Rings alongside it. Haven't decided yet.

...AND A COUPLE BOOKS I RECENTLY FINISHED ARE: My most recent three books are Manufacturing Consent: The Political Economy of the Mass Media by Noam Chomsky and Edward S. Herman, The House in the Cerulean Sea by TJ Klune, and The Hour of Meeting Evil Spirits: An Encyclopedia of Mononoke and Magic by Matthew Meyer. Games: Nexomon, Hades, and Disco Elysium were my last three.

NEXT TWO ON QUEUE ARE: The Book of the Hakutaku: A Bestiary of Japanese Monsters by Matthew Meyer and Circe by Madeline Miller (subject to change). Games: Guardians of the Galaxy and Deathloop.
WHEN THE WEATHER SUCKS OUTSIDE I'M MOST LIKELY TO BE... Depends on what one describes as sucky weather… When it’s super hot out, I’m most likely inside near the a/c reading, writing, or playing video games. If it’s rainy or snowy (which is what most people consider sucky weather), I like to go for a walk in the beautiful strolling park near my favorite bookshop.

MY FAVORITE SUPERHERO AND SUPER-VILLAIN ARE: Spider-Man. Love his spunk and conflict solution. Favorite villain is the Joker. I love the entropy. I especially love a good Joker performance and we've been so lucky with Hamill, Ledger, and Phoenix.

IF I WERE A SUPERHERO/VILLAIN, MY POWER WOULD BE: Time control.

THE BEST COMIC FILM OF THE PAST 5 YEARS IS: (Animated) Spider-Man: Into the Spider-Verse, (Live-Action) Joker.

THE WORST COMIC FILM OF THE PAST 5 YEARS IS: Probably Aquaman, though I’ve missed a ton of comic book movies.

I JUST WATCHED Moonrise Kingdom AND IT WAS AWESOME: Haven’t watched anything in theaters since before Covid started… I just watched Moonrise Kingdom which I enjoyed. Otherwise, I re-watched Breaking Bad with my girlfriend and it’s still a great, high-intensity show. I recently played both Hades and Disco Elysium, which were phenomenal experiences and highly recommended.

I JUST WATCHED ... AND IT WAS TERRIBLE: I haven't watched anything I thoroughly disliked in a little while. In the video game realm, I started up Deus Ex: Mankind Divided and shut it off pretty soon after because I felt like I was hit with too much uninteresting exposition in a short amount of time. I liked Deus Ex: Human Revolution a lot though.

BEST SCIENCE/SPECULATIVE FICTION SHOW OF THE PAST 10 YEARS: Game of Thrones Seasons 1-4. The books were better, but the show did a phenomenal job. Seasons 5-6 were decent. And I guess they ran out of time with seasons 7&8 because they were not particularly great.

NAME A BOOK YOU *NEED* A MOVIE OF (OR VICE VERSA): I’d love to see Sabriel turned into a movie, but I’d love it even more as a video game. There is so much potential for enticing gameplay with the Abhorsen's ability set.
Welcome, Joe D!
Posted by Adri Joy at 12:00:00 PM