Come for the murder, stay for the communism 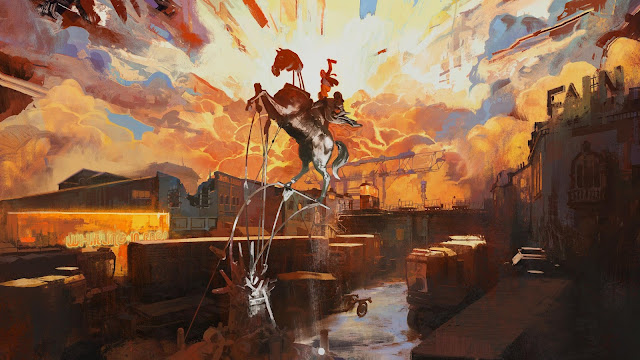 Imagine being such a disaster of a human being that you forget your entire identity after a multi-day, substance-fueled escapade. Your quarters are in a disastrous state; furniture broken and scattered, booze bottles and drug paraphernalia blanket the floor, the window shattered and letting the brisk March air invade the room. Upon waking, you discover that you're a detective and you came here with a mystery to solve. A murder to be precise.
Without a badge to figure out who you are or a gun to defend yourself, you must rely on your inner monologue and your partner, Kim Kitsuragi, to discover the truth of what has transpired in Martinaise. Do you indulge in the yearning for one more hit of your preferred substance or do you go clean? Do you let the voices in your head dictate your choices or do you ignore them? Do you side with the capitalists or the socialists? Or do you go all the way left or right and become a communist or a fascist? These are a fraction of the options given to the player throughout their experience in Revachol, where playing honestly reveals not only the kind of detective you become but what kind of person you are as well. 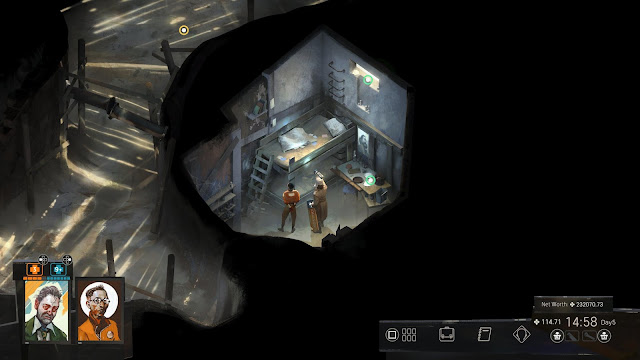 Disco Elysium is a game rife with story and lore that requires all of the player’s attention. The game is not to be played without the player’s complete and total focus. This could be a criticism of the game’s breadth of exposition that assaults the player at every corner, but can also be a praise of ZA/UM, the developers behind this in-depth storytelling triumph. I would not recommend this game to someone desiring a story to be hand-fed to them. While the developer has carefully crafted a game that demands total player engagement, the reward is more than worth the focus asked of the player.

One of the most important decisions is offered to the player before the game begins: What kind of detective do you want to be? Allocating skill points at the introduction will determine your character’s deductive and physical capability throughout the rest of the game. There are four abilities: Intelligence, Psyche, Physique, and Motorics. Each ability governs a set of six skills. Distributing points heavily into the Intelligence and Motorics abilities will see your character become a highly intelligent detective in tune with his reflexes, though lacking in his social capabilities (a la Sherlock Holmes). Invest into Psyche and Physique and become a rather dumb, but intuitive, brawny detective who beats up those he can't charm into giving him answers. 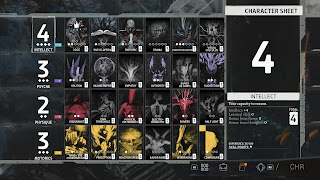 Disco Elysium is a pen-and-paper RPG-cum-video game that leans heavily into its world history to immerse the player in the war-torn former capital city of Revachol. This information can come across as a barrage of information, making the player unsure of what is useful and what isn't (especially if one invests heavily in the encyclopedia skill). But that’s part of the magic of Disco Elysium; Do you use this robust, though sometimes irrelevant, information in conversation and risk everyone thinking you’re a weirdo, or do you ignore it and stick with your line of questioning and miss out on some hilarious, though possibly useful, dialogue? Every choice has the chance to affect the main character’s health or morale. Depleting either will result in a game over and a load of a previous save, contributing more weight to each decision, though the game does give the player considerable opportunity to ensure that doesn't occur through the many easily attainable healing items in the game.
To elevate the narrative, Disco Elysium: The Final Cut includes excellent voice acting. Each character and internal voice is well cast and injects additional depth into an already well-written story. From the ill-tempered street rat, Cuno, to the mild-mannered washerwoman in the fishing village, every personality is unique and their voices remove the characters from the confines of the screen and bring them out into the world. In the hands of ZA/UM, they become memorable, living, breathing characters. 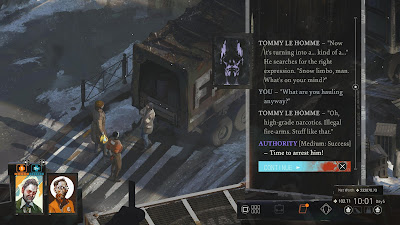 The abstract expressionist art style is unique, beautiful, dark, and messy; perfectly complementing the narrative. At any moment, a screen capture could provide an expressionist painting worth putting a frame around to be hung on a wall. ZA/UM knocked it out of the park.

I won't lie, I spent most of the game walking around with a plastic bag in one hand, gathering every bottle I could find so that I could recycle them to buy meds to help offset any bad decisions I made (and I made many). In the other hand, I held a multi-tool for cracking open anything that stood in my way. Considering the multi-tool was massive and orange, and the plastic bag was bright yellow, my character must have been quite the sight to any NPC. In addition to usable items, each piece of equipped clothing affects the detective you wish to be. Want to be a tough guy detective? Wear a muscle shirt under that cloak. Switching clothing before making a dialogue choice is an effective strategy when trying to pass a check. ZA/UM made most checks available to try again after the player increased certain skills, so the fear of missing out is heavily negated. Throughout my time with Disco Elysium, I ran into a few glitches. There were dialogue choices that wouldn't select, one specific set of open stairs that refused me entrance for quite some time (which made me think I was doing something wrong), and music and sound effects would frequently cut out when I walked along the western coast of the waterfront district. At one point I couldn't load my most recent save file. Luckily the game autosaves frequently, though I lost about a half-hour of gameplay. These issues, along with the initially slow pacing of the story, didn’t hamper the overall experience much, though they were notable issues that briefly removed me from an otherwise incredibly immersive game.
Minor issues aside, Disco Elysium The Final Cut is a triumph in immersive storytelling. With a unique and engrossing setting, an intriguing premise, a great accompanying soundtrack, and a cast of meticulously-crafted contrasting personalities, the game secures itself as one of the best RPGs of the last decade. Disco Elysium asks the player one major question: What kind of detective do you want to be? It then proceeds to give you the tools you need to live that fantasy, grisly as it may be.
The Math
Objective Assessment: 9/10
Bonus: +1 for making the player feel like they've been placed in the shoes of a detective down on his luck, then giving them the option to do something about it (or not).
Penalties: -1 for multiple technical issues.
Nerd Coefficient: 9/10
Posted by: Joe DelFranco - Fiction writer and lover of most things video games. On most days you can find him writing at his favorite spot in the little state of Rhode Island.
Posted by Joedelfranco at 12:00:00 AM