Today, we're welcoming the third of our new contributors to the flock: Elizabeth Fitzgerald!

Elizabeth Fitzgerald is a freelance editor and owner of Earl Grey Editing. An unabashed roleplayer and reader of romance, her weaknesses are books, loose-leaf tea and silly dogs. She tweets @elizabeth_fitz. 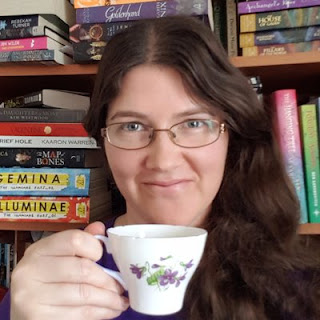 MY PET PEEVES IN NERD-DOM ARE: “Seasonal” release dates, reading lists or challenges (there are people living in the southern hemisphere, you know). Speculative fiction people dunking on romance like it’s the Genre Wars (if you’re going to try it, be prepared. Those romance fans do not mess around).

RIGHT NOW I'M READING: Scar Tissue and Other Stories by Narrelle M. Harris and Stories of Your Life and Others by Ted Chiang (I swear I don’t usually read this many short stories)

...AND A COUPLE BOOKS I RECENTLY FINISHED ARE: Harrow the Ninth by Tamsyn Muir, Rosewater by Tade Thompson and A Night to Surrender by Tessa Dare.

NEXT TWO ON QUEUE ARE: A Song of Flight by Juliet Marillier and Hyperbole and a Half by Allie Brosh

WHEN THE WEATHER SUCKS OUTSIDE I'M MOST LIKELY TO BE... camped out on the couch with a cup of tea, a blanket, a pair of dogs and a good book.

MY FAVORITE SUPERHERO AND SUPER-VILLAIN ARE:  Joey aka Solar from Tansy Rayner Roberts’ Cookie-Cutter Superhero series (although I’m also quite partial to Ms Marvel). There seriously needs to be some more memorable super-villains in books (and on the whole, let’s be real).

IF I WERE A SUPERHERO/VILLAIN, MY POWER WOULD BE: Administration a la Myfanwy Thomas in The Rook by Daniel O’Malley.

THE BEST COMIC FILM OF THE PAST 5 YEARS IS: I do not watch enough film to be able make any claims about what’s best (seriously, there are far too many books to read), but I loved the recent live-action adaptations of Ruroni Kenshin.

THE WORST COMIC FILM OF THE PAST 5 YEARS IS: Captain America: Civil War

I JUST WATCHED Dune AND IT WAS AWESOME: Dune. Yes, the character development wasn’t the best, and there were definitely some issues. But I loved some of the design elements and my goodness it was pretty.

I JUST WATCHED ... AND IT WAS TERRIBLE. I do not have the patience to watch terrible things.

EVERYONE SHOULD SEE ... BEFORE IT'S TOO LATE, If I’m hearing about it, it’s definitely too late.

BEST SCIENCE/SPECULATIVE FICTION SHOW OF THE PAST 10 YEARS: Cleverman. Indigenous Australia does superheroes.

NAME A BOOK  YOU *NEED* A MOVIE OF (OR VICE VERSA): Since we’re on the theme of superheroes, I’d love to see a movie adaptation of Ambelin Kwaymullina’s series The Tribe. X-Men style YA superheroes in (a distantly) post-apocalyptic Australia.