After 'Doctor Who Flux', we can't wait for Chris Chibnall to go away 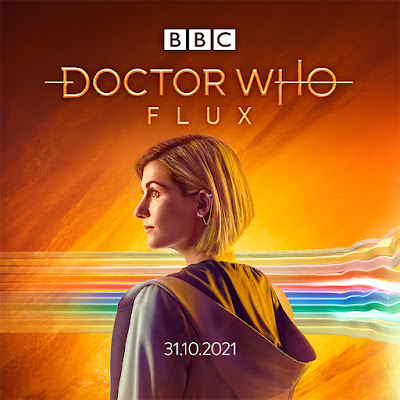 It can't be disputed by now: Chris Chibnall is not a good writer, and he has done harm to Doctor Who. His first episode as new showrunner, The Woman Who Fell to Earth, appeared very promising on first watch, but it hid many of the writing vices that would explode into full form in Flux: a forgettable villain with more makeup than personality (first Tim Shaw, now Swarm), random dead extras we don't get to know or care about (first Asha, now the entire universe), a clever winning plan done entirely offscreen (first hiding Tim Shaw's bombs inside himself, now hiding some Mouri inside a Passenger), the ethical mess of having the Doctor kill villains with their own weapons (first tricking Tim Shaw into detonating himself, now leaving the Sontaran fleet exposed to the Flux), a world-shattering cliffhanger that gets immediately reversed (first stranding the Doctor and her companions in empty space, now turning the Doctor into a Weeping Angel), and a key plotline deliberately kept hanging to tease the next episode (first figuring out where the TARDIS went, now hiding the Doctor's memories). Chibnall clearly knows the tricks of the writing craft, but he just throws them onto the screen, trusting that they'll sustain the story on their own, without giving due thought to what the story is saying or what possible interpretations they open themselves to. It's all gimmick with no clear artistic intention.

To understand how Chibnall's approach to storytelling works, let's examine how he has developed his signature contribution to Doctor Who: the Timeless Child plotline. It was seeded all the way back in The Ghost Monument, with no payoff until another mention in Spyfall part 2, an entire season later. The effect of the long wait was to lessen the impact of what was ultimately just another tease (Chibnall has a tendency to prolong mysteries beyond the audience's ability to care). Then, in The Timeless Children, we were subjected to a mammoth infodump that would have worked better if it had been gradually revealed across the season (as Chibnall himself did in Fugitive of the Judoon, which introduced a gigantic reveal with barely any explanation, and it worked phenomenally as a clue to bigger secrets).

After The Timeless Children, there was heavy discussion online about whether the Doctor's retconned origin ended up enhancing or diminishing the character. On one hand, there was new space left open to explore entire lifetimes' worth of backstory; on the other hand, the Doctor's relationship to the Time Lords was reversed from free-spirited rebel to exploited lab rat. What the Doctor herself thought of it all, however, was left unsaid. This is a frustratingly isolated Doctor, who treats her friends like she doesn't fully trust them. This choice is partly excusable; humans can't possibly comprehend what multiple lives mean to Time Lords. However, the Master's destruction of Gallifrey robs the Doctor of any equals she might turn to for support. So this Doctor turns inward, keeping her feelings bottled up, and we can only guess what's going on in her head. Not that she detaches herself from the plot: a lot of actions continue to come from the Doctor, but they don't reveal how her character has been affected by the truth about her past. It's like having her not know who she is anymore requires that we don't either.

Just before the end of the Moffat era, I wrote that Doctor Who worked best when it followed a season-long theme that you could discern in each episode upon rewatch. This style of writing was noticeable since the Davies era. Chibnall has only a superficial understanding of season-long themes; his style is to plant a question in the premiere and do nothing with it until it pops out ot nowhere in the finale.

Perhaps in an attempt to overcorrect his bad habits, Chibnall designed Flux as an interesting narrative experiment that made numerous promises and failed to deliver on all of them. In fact, one of the most painful things about the clumsy pacing of Flux is that much of it could have been fixed simply by rearranging scenes. In The Halloween Apocalypse, Vinder and Swarm didn't need to appear until the end of the episode, while Claire Brown, Joseph Williamson and the Sontarans didn't need to appear at all. Even worse, the character of Diane is set up for a nonsensical arc. Even though her abduction into a Passenger gives her the crucial information to save (what little remains of) the universe in The Vanquishers, that requires her to be put in pause for five episodes, and there wasn't any logical in-universe reason for Azure to singularly target her in the first place. Chibnall likes the feeling of thrill and drama, but hasn't learned how to deliver them, so he smothers his scripts under dozens of layers with the semblance of thrill and drama. Especially in Flux, he seems to have confused foreshadowing with foregrounding. The Sontarans have nothing to do in the premiere, but we see them here because they'll matter later. Diane is of no consequence to the plot for five entire episodes, but we see her here because she'll matter later. In fact, the entire characters of Swarm and Azure didn't need to be positioned as the season's big baddies; they didn't hold any personal significance to the Doctor anyway and they had minuscule impact in the story overall. What we get in The Halloween Apocalypse is an overbloated and confusing avalanche, and even that doesn't come close to how badly Chibnall will later jump between a hundred different subplots in The Vanquishers.

Untangled into a coherent form, Flux goes like this: panicked that the Doctor has finally found out (i.e. been lectured by the Master for an entire episode) about her true past, the hidden Time Lord organization known as Division releases their ancient enemy Swarm, who can finally execute his old plan to sabotage the Mouri priests that keep Time captive, unleashing the Flux, a destructive wave of antimatter that is expanding across the universe. What Swarm wants from the Flux is to win an ancestral war between Time and Space. What Division wants from the Flux is to put an end to this universe, collect the insurance money, and move across the void to the next universe. But before the Doctor can deal with any of this, she's dragged into successive skirmishes with a Lupari, the Sontarans, the Weeping Angels, and the Sontarans (again), because the incalculable devastation brought by the Flux has moved many to seek refuge and many others to fight over what remains. How will the Doctor save the day?

This is not to say that our heroes can't have losses. It's possible to make an interesting story that ends in defeat. But the cost in Flux is an emotionally empty story. Gone is the joy of exploring the universe, the optimism in the face of disaster, the repudiation of violence as a solution, the burning compassion of one who has witnessed suffering for a dozen lives.

One fundamental problem is that the Chibnall era has a very confused moral compass. The Doctor goes out of her way to ensure Earth is spared from the Flux, but she doesn't make the same effort for the millions of galaxies being swallowed across the universe. When it becomes clear that Earth is the only safe place left standing, the Doctor's priority is not to gather the survivors from all the other dead planets, but to close off access to Earth because she takes it for granted that the refugees will be hostile. When confronted with Tecteun, the Doctor complains of the potential life she was removed from, but doesn't seem to think the repeated torture she underwent is worth mentioning. When the Sontarans orchestrate the genocide of the Cybermen and the Daleks, the Doctor's response is to let it happen and then orchestrate the genocide of the Sontarans (no, it's not OK to mass murder evil species, not the least because there's no such thing as an evil species).

This is not a hopeful Doctor Who. This is not an inspiring, or exciting, or thought-provoking, or even entertaining Doctor Who. The literal end of the universe amounts to a passing inconvenience that leaves no mark on the characters, and we don't see the Doctor evolve as a result of this experience. There's endless frantic action, endless plot bunnies multiplying out of control, endless casualties, and, in typical Chibnall fashion, endless monologues, and it all lands with a resounding meh. What we can tell about Chibnall as a writer is that he loves to build puzzles, the more intricate the better, but his sense of aesthetic satisfaction only extends to showing off how the edges of the pieces fit together, and doesn't care about what the full picture means. His writing-as-puzzle approach means that events, motifs and twists are shoehorned into place just because the plot requires them to be there and not because of any authentic choice by the characters. He wants the effect of the audience's excitement without understanding what causes excitement.

We'll have to be patient. Russell T. Davies will be back soon enough. Choosing him is a signal that the BBC is aware of the damage done by Chibnall, which is why they went for the least risky option. We only have three more episodes left to endure.

Bonuses: +2 for introducing several fascinating concepts (a war between Time and Space, a villain who thinks nothing of erasing an universe and starting over, a network of underground tunnels with connections all over space and time, a species of intelligent dogs sworn to the protection of humans).

Penalties: −1 for sweeping the story's obvious repercussions under the rug (the universe is now an empty, dead void, and a practically infinite number of people have died, but it's all OK because Earth survived), −1 for the kitchen-sink-in-a-cement-mixer plot, −1 for the ongoing disservice to Yaz's character.