The Novella Initiative: Journals of the Plague Years by Norman Spinrad 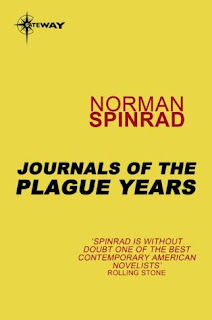 In an alternate world where AIDS evolved into a ever-changing chimera of a fatal STD, a repressive America suffering under this pandemic brings together the story of a soldier, a free love activist, an ambitious politician, and a scientist who may have found a radical cure for the scourge. If they all don't get nuked, first.

The story was originally written as the AIDS crisis was in full swing, and the dangers of unprotected sex, especially non heteronormative sex, were becoming scary, and frightening, especially given the lack of response from politicians to the crisis, as well as exploitations of the crisis by various parties.

Spinrad takes that as his jumping off point to a world where AIDS has evolved, mutated and chanted to an incurable and quickly fatal venereal disease that makes just about all unprotected sex to be fraught and dangerous. The infected are put in Quarantine Zones (predictably, the Bay Area is a big one), the uninfected turn to sex with machines rather than "with meat", for fear that one encounter could lead to becoming infected, a puritanical streak of America seeking the infected assiduously, and an overall climate of fear, denial, shame and oppression over the United States (and, clearly, the world as well).

The story's epistolary format, first person point of views from the four main characters, gives the novella a good freshness as we get seriously into the heads of the main characters, and this technique really works well when the characters meet at points and we get an external view to the internal and first person point of view of someone we have not seen from the outside. All of the characters in the novella talk a lot in their heads, something I have found is a recurring feature in his work.

The reason why I wanted to re-read this story for the novella initiative was a plot point I half remembered, but came to mind with the recent (as of the writing of this piece) push by vaccine companies to get people to take a booster shot of Covid, even as the science and usefulness of that does not seem clear. In this novella, the cure that Dr. Richard Bruno discovers is one that would affect the bottom line of the pharmaceutical company he works for, and mainly for that reason, it is suppressed--the company he works for *relies* on creating and marketing palliatives for those infected by the plague.

Things that feel out of place these days is the echo of "free love" that we see in San Francisco, that feels like a relic of the 1960's transformed to the present day. Walter T Bigelow, as a closeted homosexual turned near dictator by the power of his office, felt very much of the Reaganesque type of Republicanism rather than Trumpism. Although most of his instincts are very wrong in the book, and his politics are abhorrent, he finally manages to do the right thing in a way that I think that a similar figure created today and in these times simply wouldn't. He contrasts with, say, the Governors of Texas and Florida today in 2021 in their responses to Covid.

What didn't feel out of place--the fact that the US would invade Mexico to obtain Baja California in order to have a place to put the black card infected. Given the War on Terror and our two decades in Afghanistan, that felt even more relevant than when I first read this at the end of the 1980's. Spinrad saw clearly that the American war machine could be turned to some very dark ends.

And yet in the end, for all of the trials these characters go through, it is meant to be a hopeful work, in a way that we don't quite see today as of the time of this writing. Maybe Spinrad HAD to have this as epistolary collations from a century and a half in the future to convince the reader that this world did manage to get through its plague.  Maybe the stories that will get us through THIS plague in a similar way could take a page from Spinrad.

Norman Spinrad's stories are often bizarre, strange, stream-of-consciousness works that often defy genre expectations and boundaries. Journal of the Plague Years, with an America, and a world whose strangeness and weirdness comes off on every page and nearly every paragraph, still holds a powerful message, especially in 2021 as we suffer under our own pandemic. This one is even weirder than most of Spinrad's works, but it is a story very much worth reading, and re-reading today.