I have seen hell, and its name is Space Jam: A New Legacy 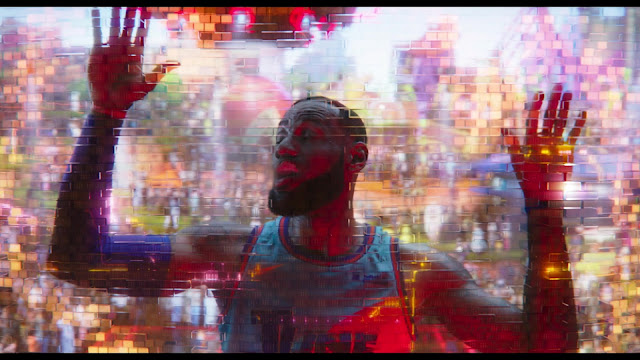 When I joined the team at Nerds of a Feather, the editors explained the blog's official policy to me as striving to stand "on the charitable side of honest." I've made my sincerest effort to keep that principle in mind during these months, as I analyzed stories that were great and others that were less great. In the case of Space Jam: A New Legacy, the charitable thing to do is to advise you to skip it. There's no possible defense of it. One cannot even entertain the case that its merciless stuffing of the viewer's eyeballs with one immensely uninteresting scene after another serves, as in the original Space Jam, to showcase the feats achievable with the latest advances in animation technology. That argument wouldn't hold here, firstly because digital animation is having a wonderful moment in the 21st century without the need for Space Jam's help, and secondly because telling uninteresting stories as an excuse to boast great animation is a niche firmly held by Love Death + Robots. This? This didn't need to exist. In a nutshell, LeBron James plays basketball and wins. There, I spoiled it. Now you don't have to watch this irredeemable pile of rubbish.

Space Jam: A New Legacy was not made for Looney Tunes fans, or for basketball fans, or for digital animation fans. It was made for Warner Brothers marketing executives. Somewhere in the corporate hierarchy, someone must have issued a memo demanding a boost of renewed relevance for properties that were fading from popular awareness. As if conceived from the segment of film discourse that believes spotting the reference to prove you're a "real fan" is an aesthetic category, we have a product, because calling it a movie is an insult to words, that in the years to come may remain bizarrely satisfying to people who enjoy cataloguing tiny faces in a crowd. And that's because its main selling point isn't even LeBron James, or Bugs Bunny, or Don Cheadle (you know, the world-renowned superstars who actually do something in the story), but the hundreds of obscure characters that are there just to be there. Possessed by the inexplicable urge to cheer in the general direction of a basketball game regardless of their individual personalities or even which emotional beat is happening, they invest Space Jam: A New Legacy with the incongruous property of being rewatchable only for the characters who have no role or purpose or reason to be in the story. This is the limit state of intertextuality: a text that only points to other texts, but lacks its own meaning. Meaning, you say? What's meaning? Look, there's Wilma Flintstone waving at us!

Making references is not bad in itself. But the reference needs at least to be understood. Remaking Rabbit of Seville with only the barest musical resemblance and without the meticulous match between melody and action is to miss the point of what made Rabbit of Seville the masterpiece it is. To make a Road Runner joke where it is Wile E. Coyote who succeeds at using the paint-on-the-wall trick to mislead and trap the Road Runner (instead of the other way around, as God intended) is to catastrophically misunderstand the dynamic that defines these characters and to blaspheme against seven decades of cartoon history. Wile E. Coyote's whole shtick is that he never captures his prey. If you don't get that basic fact, you shouldn't be making a Looney Tunes movie.

In a crude resemblance of the way the first Space Jam managed to insert some critique of itself (Daffy Duck illustrating how much Warner Brothers likes to kiss its own ass, Bugs Bunny dreading the prospect of being used as a mascot to sell tickets), A New Legacy comes surprisingly close to denouncing its own existence. The plot starts with LeBron James being invited to let Warner Brothers use his image in movies. This fictional version of him understands that athletes generally don't make good actors, and refuses. The pathetic characters meant to represent Warner Brothers executives are appropriately despondent at their dearth of good ideas—they're so uncreative they literally let a computer write their corporate plan. But before a terrible movie and a digital abomination can be prevented, the soulless evil at the heart of Warner Brothers captures LeBron James and forces him to play. To highlight the violence of the whole production, he then kidnaps thousands of viewers from the real world. A New Legacy knows too well that we're prisoners begging for the show to end.

But this is not the full extent of how much A New Legacy despises itself. When Bugs Bunny flies through the Serververse (which I guess is how we have to call the DCEU from now on) to recruit the rest of the Looney Tunes, we find them already integrated into the plots of better movies. When the legendary cartoon stars would rather be doing more exciting and fulfilling things somewhere else, and even LeBron James is playing a version of himself who would never have agreed to be here, what we have is a story that is almost crying for help, aware of its own absurdity and unable to stop.

Nothing matters. Nothing has meaning. No story has value except as a brand. What did Road Runner want in the Mad Max world? What motivated Foghorn Leghorn to ride a dragon over Westeros? What was Speedy Gonzales looking for in the Matrix? Why did Lola Bunny feel the need to train with the Amazons? Well, who cares? Those scenes are purely irrelevant. Entire worlds are dragged into this monstrosity for no purpose. They're there just to be there. They're there for you to point and say, "I get that reference." They're there to remind you how much Warner Brothers owns. During the climactic match, the screen is filled with face after face of famous extras and the viewer's attention is at a loss. Where are we expected to be looking at? In any given frame of the game, our athletic star's graceful moves compete with Pennywise hiding behind Agent Smith hiding behind the Penguin in the background. No part of the screen is meant to occupy the main focus, because the studio wants you to notice each and every last of its properties. The established conventions of visual storytelling go out the window, as do the narrative principles of logical worldbuilding and clearly defined stakes (why did the villain even need to make a bet when he could just keep his prisoners?) and the rules of basketball (what happened to the three-second rule, or to running with the ball, or to blocking fouls, or to not kicking the ball, or to consistent scorekeeping?).

In 1996, Michael Jordan won his Space Jam when he realized he could use the rules of the cartoon world. It's a form of fantasy, but an internally consistent one. In this new version, the day is saved by the infinite use of cheat codes. Rules? Narrative expectations? Emotional investment? Realistic parenting? The implicit pact of respect between creators and viewers? Nah. All that matters is that Warner Brothers invented a shiny new way to rob the graves of a dozen movies to dress up the ghost of one. Space Jam: A New Legacy is a repugnant exhibition of the most vulgar kind of self-congratulation, unworthy of the classics it cannibalizes and with no right to claim two hours of your time. Just like the Looney Tunes, you're better off in other movies. You were never the audience this thing was meant to please.