Melissa Caruso’s The Obsidian Tower starts a new series set in her fascinating world, changing the focus from the Serene Empire to the Witch Lords of Vaskandar, introducing a new and interesting protagonist. 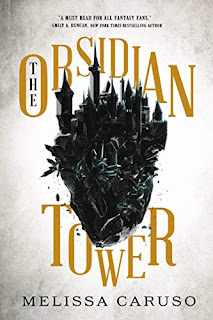 Ryxander, or Ryx, has a problem. She’s the granddaughter of one of the Witch Lords of Vaskandar, and that’s a lot to live up to. She has also been named the Warden of Gloamingard Castle, which is the home base of her grandmother, so the young Ryx, barely in her twenties, has a lot of responsibility on her shoulders. And of course the Lady of Owls is watching her always. Even beyond this, she is from a long line of Mages, even beyond her mother, and a family (except her Ravarran mother) quite skilled in Magic. But this is where Ryx stands apart and is quite literally alone.

For, you see, Ryx has flawed magic. And in fact, if you cannot magically brace yourself, to touch Ryx is quite literally to court death. She has none of the magical heritage of her family, and given her place as a Warden, all of the responsibility. Now, hosting a peace conference, a sudden death, and a secret of the family that can no longer be kept, Ryx is going to have to learn to use her flawed magic to protect those she loves, and perhaps far beyond the Castle as well.

This is the world and setup of Melissa Caruso’s The Obsidian Tower.

Having enjoyed The Tethered Mage and it’s sequels, I was lax in getting into her new series, and I will say right up front, upon starting the audiobook of this new book, first in a new series, that this is a case where I regret waiting so long before picking this one up. I devoured this audiobook driving across Western states, and the book was a fit companion for long driving days. The narration by Senn Annis is top notch.

Caruso’s strengths as a worldbuilder, plotter and writer are open secrets, given her enthusiasm for talking about the craft in social media, cons, and the like. Those strengths, which started strongly in the Tethered Mage series, really come into her own here. This is a cliche to be sure, but it feels like in tackling Ryx’s story, and the story of Gloamingard Castle and its dread secret, Caruso has leveled up as a writer. The dialogue is even sharper and better drawn, the descriptions and vividness of the settings really come through. And the plot and techniques the writer uses are both traditional as well as very modern indeed.

In terms of that traditional approach, in some ways this is a fantasy that follows some well worn paths and story beats. A young person thrust into power and authority, and very unsure of themselves. Put under a pressure cooker and a threat that could threaten not only what they hold dear, but perhaps even the entire world. Secrets and Lies and revelations of a family past not quite as golden as one thinks. Someone who seemingly doesn’t have power or useful power but is, in fact, if not a “chosen one”, at least far more important than they first appear. High Magic, political intrigues, vivid worldbuilding. Be it fantasy from the 70’s, 80’s, or 90’s, the main lines are familiar. This is a novel in conversation particularly, I think, with the early work of Robin Hobb.

In other ways, this is a very modern and fresh and 21st century fantasy on the cutting edge of what the genre is doing today. The novel is strong in its diversity along a number of axes, giving women roles and power and authority figures every bit as much as the men get. The society also uses bisexuality as a default, the relatively new and refreshing trend of building societies in fantasy where bisexuality is the cultural default. There is also one major character who uses they/them pronouns as well. While I can hear old traditionalists decry these in fantasy as being “woke” (this year’s SJW apparently), fantasy worlds are not our world, and building a world where women are not relegated to narrow lanes, where attraction and personalities and people are of a wider range than even a decade ago, is completely in bounds and I appreciate this in my fantasy fiction as of late.

There’s more.  Some of the best creative works, be it a photograph, or a piece of music, or a novel, knows where to put the boundaries and guard rails in order to intensify the result. And to use techniques from other genres to enforce those guard rails. In The Obsidian Tower, for all of it being a fantasy novel, an epic fantasy novel, nearly all of the action takes place within the aforementioned Gloamingard Castle. This gives the character interactions and story a limitation and an intensity that really allows the plotting and character beats to shine through. The limitation of keeping Ryx in Gloamingard Castle is partly due to her flawed magic, and also partly because much of the novel, revolves around mysteries...including an eventual murder mystery. The use of the tropes of mystery novels helps enhance the plot and structure of The Obsidian Tower immensely, and it overall gives the novel a different feel than other comparable works, including the previous series.

Finally, and importantly for readers of Caruso’s previous series, this gives us a sympathetic ground level from the start of the Vaskandrans. The antagonists of the Tethered Mage series, here here they are the protagonists of the story, and Caruso further ties to the previous series by making Ryx half-Ravarran, providing a continuity to those readers who avidly followed the stories of Amalia and Zaira. The mysterious and dangerous Vaskandrans are still mysterious and dangerous in the personages of the Witch Lords (two of which come on screen, including the Lady of Owls), but they are humanized from the ground up, through the eyes of a protagonist whose position in that society is very much an outsider. This technique of using a pseudo-outsider in order to explain Vasandrian society, magic and customs  is an effective one, and it makes the large amount of worldbuilding go down more easily.

And such worldbuilding. We get to find out about customs, history, magic, politics and much more from the Vaskandran side. The idea of the Rookery, a neutral group of magical troubleshooters, is a brilliant idea, and one that, in addition to the overall main plot, that this new series is hanging its head on. The characters we meet of the Rookery are very different than people Ryx are used to, and seeing them within the Castle gives yet perspective for us.

Gloamingard Castle itself is a wonder of a setting, a palimpsest of a Castle, new sections being built up over centuries, and all of those sections described in interesting and sometimes intimate detail. The titular Obsidian Tower is at the heart of the Castle, and it is a rather discomforting place but it is uniquely drawn and described as are the other parts of the Castle are. Since we spend so much time in the Castle, it is well that it is such a rich place for us the readers to inhabit. And given Ryx’s issue with her touch, there are considerations made so that the Warden of the Castle will not accidentally kill the staff.

And that finally goes to Ryx herself. She is a very tightly wound and bound character, who lacks physical intimacy with nearly everyone, and so her emotions, her demeanor, her outlook are all similarly bound and corseted. The tension between her wanting to be free to do what she wants, with who she wants, tied with her sense of her duty to her people, and her family, leads to interesting character dynamics, and eventually growth for Ryx.  She is our one and only viewpoint character, and so everything gets filtered through her. That sort of intimate single point of view in an epic fantasy is a difficult trick to pull off, but Caruso manages it quite well.

In all, I don’t think that you need to have read the Tethered Mage series to enjoy The Obsidian Tower, and if you want to read one of the strong new voices in secondary world fantasy, this is a great novel to pick up in print, or, as I found, especially in audio.

Bonuses : +1 for an interestingly flawed and complex central viewpoint character

+1 for rich and immersive local worldbuilding

Penalties : -1 Multiple point of views might have smoothed out a bit of the plot beats.