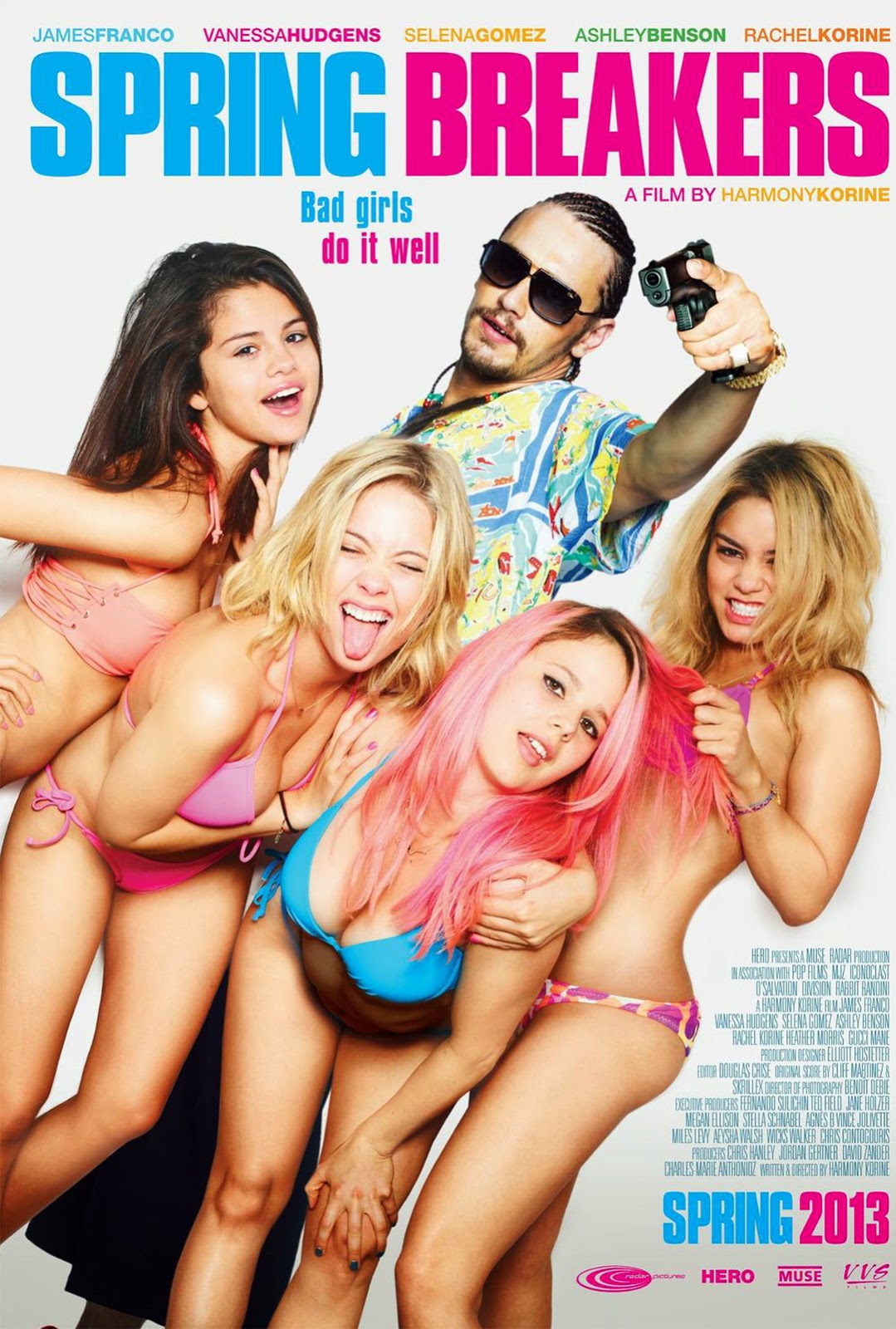 First, and let's just get this out of the way now, Spring Breakers has so many naked boobs in it that by the time people are doing blow off a college girl's chest maybe 40 minutes into the movie, it doesn't even register at first that she's topless. Boobs to the point where boobs become uninteresting. Whether or not this is by design is, like much of the rest of Spring Breakers, open to interpretation.

The plot is simple enough. Four disaffected college friends (among them former Disney tween stars Vanessa Hudgens and Selena Gomez) can't afford to go on a big spring break blowout like everybody else, so rather than stick around their crummy college town for a week, they decide to rob a diner to bankroll a last-minute trip to Florida. You know, like you do. But when they get down to the annual sun-and-sand bacchanalia, they wind up at a party that gets busted by the cops, and into the tank they go. But (lucky for them?) a local rapper/drug dealer named Alien (James Franco) thinks they look nice in their bikinis and bails them out. One of the girls is too weirded out by the whole getting-arrested-and-then-bailed-out-by-a-terrifying-stranger thing, and gets on a bus for home. The other three stay behind and join Alien on a crime spree. You know, like you do.

So here's a film that presents you three interchangeable heroines who are all loathsome, traipsing through a flesh-parade that knows almost no bounds, and I found myself by the halfway point feeling pretty dirty. And then, suddenly, the film turns into a meditative art film, with long vistas of Alien and the three remaining girls staring off into sunsets, while Alien, repeating "Spraaaaang Breaaaaak" in voice over, floats above it all. The film then culminates in some very artistic pool sex and a slow-motion drug-lord showdown.

I have no idea what the film is trying to say, if anything. Is it that there's a huge disconnect between reality and film portrayals — whether in the hypersexualization of spring break or in a life of crime? Or maybe it's an attempt to be as transgressive to today's audiences as many 1970s exploitation films were to theirs? Or is it simply "Look at all these boobs!" I can't say. But bizarrely, I kept thinking about it for days afterwards, which is something I can't say for all that many movies.

Bonuses: +1 for James Franco's total disappearing act into the character of Alien; +1 for Franco's "Look at all my shit!" monologue, which I would pay money to see done in an audition or acting class by some acting student; +1 for making me think about it afterwards

Penalties: -1 for making no effort to differentiate the three female leads; -1 for just making me feel icky inside

Cult Film Coefficient: 6/10. Still enjoyable, but the flaws are hard to ignore.

Posted by Vance K — Cult film aficionado, unapologetic lover of terrible movies, and Nerds of a Feather contributor since 2012.
Posted by vkotrla at 12:00:00 AM