The big news in the world of San Diego Comic-Con is that DC and Warner Brothers are taking over Saturday Night.  Kevin Smith has been booted from Hall H so that DC can promote four titles.  From the official release, " [k]icking off the exclusive evening is the world premiere public screening of the highly anticipated new drama series Gotham (the only screening of Gotham at this year’s Comic-Con), followed by a screening of the complete pilot of new action-drama The Flash, and exclusive video presentations from returning hit Arrow and new thriller Constantine. Cast members and producers from all four shows will make special appearances throughout the night."  Sounds like people will be lining up early and hanging out in Hall H all day.  I will attempt to make my way in, but will most likely be enjoying something else at the convention.  Time for the books! 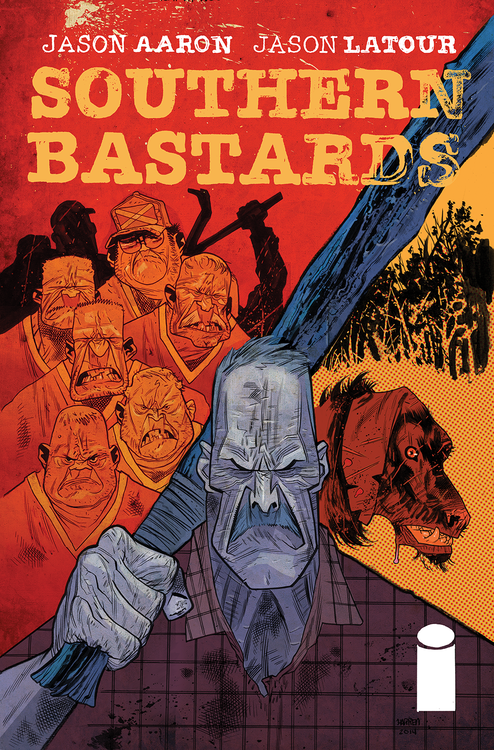 Pick of the Week:
Southern Bastards #3 - As someone who grew up in Texas, I can fully relate to high school football running a small town.  I am pretty sure it was nothing like what Earl Tubb is dealing with in Craw County, Alabama.  After watching his old friend stumble into and die on the football field during a game, he has reached his breaking point.  As it says at the start of this book, "Now Earl has a stick. And some questions he'd like answered."  Tubb begins to fight back against Coach Boss and his crew and we finally learn just how far Coach Boss' power reaches.  Jason Aaron captures the feel of a small, seedy southern town and Jason Latour's art is a bit rough around the edges to fully immerse you in a situation that would make most people uncomfortable.  I am not sure if this duo has worked on any other projects, but I will be on board with any future books they are a part of.  It was great to see Tubb finally step up and fight back and I look forward to seeing him beat people with his stick in issue #4.

The Rest:
Nailbiter #3 - The mysteries that surround the town of Buckaroo, Oregon continue to grow with each issue from this entertaining thriller from Joshua Williamson.  I was in search of some answers in this issue, but find myself with more questions than I began with.  Has Edward Warren truly retired from killing?  Something tells me we will see him begin to develop a body count again soon.  Williamson has done a masterful job crafting complex characters that provide real depth for this small town mystery.  Mike Henderson sets a dark tone that evokes real moments of terror and shock.  If you are a horror fan then it is not too late to hop on board.  I sure hope that Detective Fish begins to unravel the mystery as to why so many serial killers have sprung up in this small town.

Original Sin #5 - This event continues to gain momentum as we draw nearer to who actually pulled the trigger and killed the Watcher.  We learned last time that the Winter Soldier merely killed a replicant of Nick Fury, but we also learned that Nick Fury is one old dude.  This issue gives us the background on Mr. Fury and was a delight to read.  If you are a fan of Fury, even if you haven't been keeping up with this event, then I would encourage you to check this out.  This event continues to impress and surprise me with each new issue.  It is a bit of a disappointment that not many of the Watcher's secrets have been revealed, but still a joy to read.

Rocket Raccoon #1 - With all the hype about the Guardians of the Galaxy I would be remiss if I didn't check this title out.  I am happy to report that Rocket Raccoon is just plain fun.  Over the top action, tongue humor, and a solid little story to go along with it.  While not in the same category as Southern Bastards or Nailbiter, Rocket Raccoon is a good comic to read for pure entertainment.  The Lego variant that featured Stan Lee was enough for me to open up my wallet and I would encourage you to check out this title as well.

Legendary Star Lord #1 - Sticking with this Guardians theme, I went ahead and picked up this issue as well.  Another fun title, but with a lot more heart.  The debut was sweet, but not sure if it is enough to bring me back.  I enjoyed learning more about Peter Quill and the one-shot story was nice, but I don't know if it quite delivered the hook.  If you are a Guardians fan then you already picked this title up.  If you are new to the series like I am, then you may want to wait for the trade.