Even better than The Killing Moon! 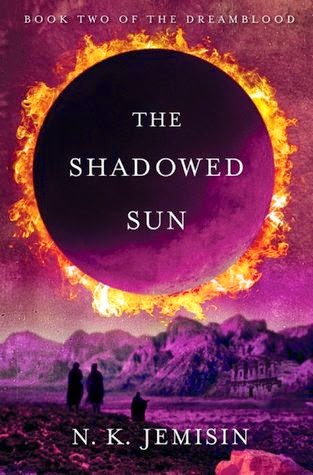 
Readers of this blog know how much I enjoyed The Killing Moon, the first book of N.K. Jemisin's The Dreamblood Duology. It absolutely blew me away. After all, where could a story that features ninja priests go wrong? But Jemisin's first installment was about so much more. At the same time a political thriller and a coming of age novel, The Killing Moon laid bare the personal and social power of belief and skepticism, revealed the power inherent to sexuality, and featured a powerful character-driven story of conflict and forgiveness! But it ended on such a high note (and so completely) that I wondered whether the second book in the duology, The Shadowed Sun, could match up. What could Jemisin have left to say?

A lot, as it turns out. Shockingly, The Shadowed Sun is even better than the first book in the duology. Nay, it blows The Killing Moon out of the sky. The prose is as rich and engaging as in the first novel, and Jemisin weaves a detailed tapestry that binds together such difficult issues as civilization, barbarity, sex, abuse, and even love and lust in meaningful ways.

The Shadowed Sun centers on two interconnected stories, both which take place 10 years after the events in The Killing Moon, when Gujaareh remains occupied by the Kisuati. Both stories are driven by main characters who are out of place in their respective societies. The first story is that of Sharer-Apprentice Hanani. The first woman to become a Sharer in the Hetawa, Hanani found that success  as a woman using dream magic necessitated repressing her femininity. Every action she took would be judged harshly by her male peers, so she had to strive for perfection -- to become the perfect, sexless Sharer. This no doubt added layers of complexity to her relationship with her mentor, Mni-inh, which in many ways reflects the master-disciple relationship between Gatherers Ehiru and Nijiri in the first volume. Hanani's story begins in the dreamworld: she he fails in a ritual of healing, with her client dying in the process. Only slowly does the Hetawa realize that this might be the result of a mysterious plague afflicting Gujaareh, a plague in which victims die screaming in their sleep.

The second story focuses on Wanahomen, the son of King Eninket and heir to the Sunset Throne who fled Gujaareh at the end of book one. Taking refuge with "barbarian" Banbarra tribes, he rises in Banbarran society to become a man of importance, and hatches a plan to retake the Sunset Throne. But at the same time, in the process he becomes a man without a place, neither Gujaareen nor Banbarran, neither fish nor fowl. And to take back the throne, he will have to do the impossible: this outsider will have to unite the diverse Banbarran desert tribes to launch an attack on Gujaareh.

The complexity at all levels of this book is astounding. The reader soon learns that the "barbaric" Banbarrans are in many ways more civilized than the "civilized" Gujaareen. The "ruthless" Kisuati overlords are not necessarily so ruthless--while issues do emerge, the Kisuati Protectorate for much of the novel is guided by Sunandi, someone who has grown to love and care for her adoptive city state. In fact, there are few issues that Jemisin shies away from tackling. She thrives when characterizing people who are out of place in their respective societies. But more strikingly, she deals with the personal and emotional consequences of death, religious belief, rape, (and shockingly) child abuse with a level of sophistication rarely seen in the genre.

What makes this book so satisfying, however, is that the characters feel real. The main and supporting characters are so well thought out that I found myself identifying with each of them--with their strengths and foibles, their motivations and feelings.

I could go on and on. Suffice it to say that The Shadowed Sun really won me over. The Shadowed Sun is a masterpiece, and a book you should definitely read. Run, don't walk, to your nearest [online?] store to buy it.

Bonuses: +1 for its rich detail and complexity; +1 for dealing with rape and abuse in a sophisticated manner

Penalties: -1 for the book's resolution