Charming Sleaze and Cybernetics in a Middle Eastern Setting 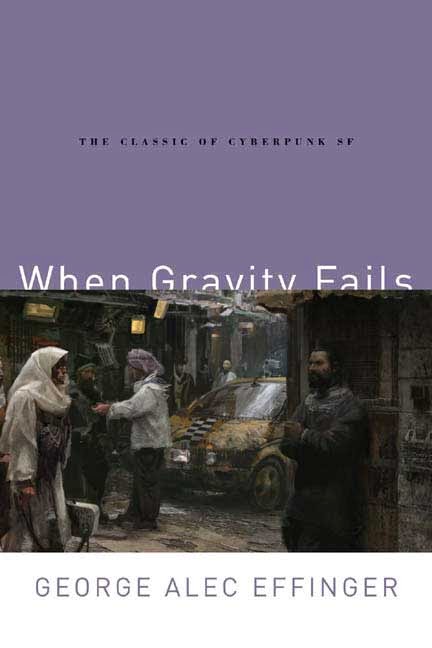 I grew up in the 80s and 90s, so it's no surprise that my vision of what science fiction is and can do is shaped, in part, by what dominated the genre during those years--namely, hard SF and cyberpunk. But whereas hard SF remains a vital and active sub-genre, cyberpunk has atrophied. The reasons are not hard to discern. Though hard SF can be parochial and tropey, the basic template of "science-y science fiction with a strong emphasis on science and strict adherence to scientific plausibility" is flexible enough to move with the times. Cyberpunk is more of a one-note symphony: hacker-y/transhuman-y types navigate treacherous near-future world where corporations are really, really powerful. And the presence of actual hacker-y/transhuman-y/corporate-y stuff all around us means that cyberpunk gets dated much more quickly than books about terraforming Mars.

That doesn't mean cyperpunk is gone; rather, it lives on in the ever-popular dystopias of YA fiction and in literary heroes like Lisbeth Salander, who Stieg Larsson basically ripped out of a Bruce Sterling novel. And there are plenty of in-genre legatees, like Lauren Beukes, who might not write cuberpunk per se, but nevertheless owe a lot to it. But now us children of the 80s and 90s are of the age when nostalgia for that teenage "sensawunda" beckons. Sometimes the urge is simply too strong to ignore.

Usually when that happens, I turn back to William Gibson--still the best writer and singular visionary of the cyberpunk movement, in my humble opinion. This time, however, I wanted to read someone new, and the prime candidates were Pat Cadigan and George Alec Effinger. I still plan to read Cadigan sometime this year, but I already had When Gravity Fails, and the prospect of reading science fiction set in the Middle East (but which reputedly did not exoticize or Orientalize its subjects) appealed. So I chose that.

When Gravity Fails falls on the transhuman-y side of cyberpunk, and has very little to do with computers--a fact that serves its durability well. People can get cybernetic implants that can bestow skills, like being able to speak a foreign language, or personality traits--including those of figures from literature, history and popular culture. It's the first book of a trilogy starring Marid Audran, a streetwise hustler in the Budayeen--a lurid, rough-and-tumble place full of prostitutes, barkeeps, petty criminals and, well, tourists. The story itself is kind of forgettable (Marid tries to find a pair of killers with the personalities of James Bond and an infamous serial killer), but it's good enough, and has a neat, hardboiled feel throughout.

The real star, though, is the Budayeen and its colorful cast of characters. It is, in essence, a cross between pre-war Beirut and New Orleans--specifically the French Quarter, where Effinger apparently spent some time. Most characters we meet in the Budayeen live on the margins of society, and interestingly, are transgender.

It's worth lingering on this point for a bit. We are currently in the midst of a broad conversation about the normativity of binary gender in SF, for example in Alex Dally MacFarlane's column for Tor.com. When Gravity Fails presents a view of how gender might work in the near future that, I suspect, has been deeply influential on a number of writers. But it doesn't really present an alternative to binary modes of thinking on gender. Rather, it presents how binary conceptions of gender might work in a context where switching is relatively easy, but in which many social norms remain deeply conservative. The switching itself becomes normative, but the in-between state (as far as sexual organs are concerned) remains taboo. Throughout the book there are subtle, pejorative references to pre- or non-op transgender persons, called "debs," from both the "real" men and women (the term used in the book) and post-op transgender men and women.

So this probably wouldn't pass the "MacFarlane Test," were she ever to develop one in her column, as When Gravity Fails does not present a view of non-binary gender that extrapolates beyond 2014 norms. However, I read it as Effinger creating an internally consistent mode of thinking about gender in a near-future setting that incorporates plausible prejudices (since people always do seem to have prejudices). It is as if to say that the ready availability and apparent ease of medical procedures for switching sex doesn't necessarily imply the dissolution of binary gender norm, but may instead simply reformulate or recontextualize them--perhaps even, in some social respects, reinforcing or reproducing the binarism in the process. While that's an interesting prospect, it's unfortunate that we never get a view of all this from a "deb's" perspective, as there are no significant "deb" characters. Instead we're just presented with casual bigotry as part of the backdrop. I would have preferred if Effinger had handled this differently.

Effinger's treatment of his Arab and Muslim subjects--and of Islam--is another notable feature of the book. The crude stereotypes of the post-9/11 zeitgeist are refreshingly absent, and in their place, stress on often neglected elements of ethnic and religious custom in the Middle East: hospitality, complex modes of address, the strategic use of flattery and so forth. The close quarters coexistence of "sin" and "faith" in a Middle Eastern city may surprise readers whose view of Islam is largely informed by Western caricatures and the crude, violent extremism of groups like ISIS. Effinger's Muslim characters, by contrast, tend to have a complex, fluid relationship to their faith--not uncommon in real-world analogues to the Budayeen. Some are deeply religious, others are not, but even the ones who are work to negotiate strictures of faith with the practical realities of daily life.

Nor is religion treated with the disdain common in science fiction, where it is often framed as "superstition" or "anacrhonism." Marid, we are told, is not a religious man. But as he falls deeper into danger, he begins to reflect on his long-neglected faith. It gives him a degree of comfort and psychological protection, as it does for so many the world over. Effinger isn't endorsing a religious viewpoint or narrative, but rather portraying religion and religious people in a way that feels authentic and humanized and suitable for the near-future world he has constructed.

I also give Effinger major kudos for setting the book outside the West and not treating his subjects like objects. Though Effinger isn't an insider (and since I'm not either, I can't vouch for his attention to detail), everyone feels complex, three-dimensional and believable. And almost everyone is sympathetic in at least some regard. If you're going to write about something you didn't grow up with and don't claim as your own, then this is the kind of approach that will set you apart from the glut of exoticizing cultural appropriation--not to mention the offensive stereotype-mongering that dominate portrayals of Arabs and Muslims in Western literature and entertainment media.

The book's problems are relatively smaller, but still notable. As mentioned above, the plot isn't very well developed or well paced. That doesn't ruin the experience, but it could have been better than it was. And there are moments where the colorfulness of the Budayeen and its residents gets to be a bit too much. Incidentally, this is also a problem I identified with Daniel Woodrell's Bayou Trilogy--which, science fictional elements notwithstanding, is quite similar in tone and theme to When Gravity Fails.

Bonuses: +1 for presenting an unforgettable and thought-provoking world; +1 for the generally sensitive, nuanced and sympathetic portrayal of Arabs, Muslims and religious people.

Penalties: -1 for lack of "deb" perspectives undercutting significance of gender schema; -1 for missed opportunities on plot and pacing.

Nerd Coefficient: 8/10."Well worth your time and attention."