In less than a week I will be enjoying sunny San Diego and rubbing elbows with over 100,000 of my closest friends. As I prepare for my upcoming journey, I present to you good folk my top panel from each day.  I hope that I will be able to attend these panels, but plans are fluid.  It was hard to pick just one, but Batman, Horns, Saga, and a chance to impress my son with insider information is pretty good.

Thursday:
DC Comics: Batman 75: Legends of the Dark Knight
In his 75-year publishing history, Batman has grown into one of the most popular and influential icons of all time. Don't miss this historic panel with the legendary creators such as Neal Adams, Greg Capullo, Geoff Johns, Jim Lee, Frank Miller,Grant Morrison, Denny O'Neil, and Scott Snyder, who have shaped the Dark Knight into the hero he is today.

Friday:
RADiUS-TWC Previews Horns and Everly
First-time Comic-Con attendee and star of Horns Daniel Radcliffe joins co-star Juno Temple, director Alexandre Aja, and novelist Joe Hill to debut the world premiere of the Horns movie trailer, chat about the film, and hold an audience Q&A. In addition,Salma Hayek will be introducing new footage from her kick-ass film Everly. The panel will also reveal new scenes from upcoming RADiUS titles with some special surprises.

Saturday:
Saga
You know Saga. You love Saga. You can't get enough of Saga. Luckily, this year, series creators Brian K. Vaughan and Fiona Staples are ready, rested, and eager to talk to you about Saga. What's coming up next on you-know-what? How could they do that thing to you-know-who? Whether you're coming in your finest cosplay or street clothes, you need to come to this panel..

Enough about me, time for this week's reviews! 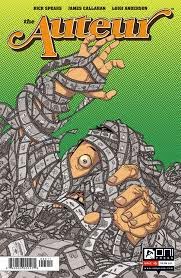 Pick of the Week:
The Auteur #5 - Rick Spears managed to give this comic the ending it deserved.  Nathan T. Rex may be a deranged individual who drugs women, bails out convicted serial killers, and has an extremely loose moral compass, but I ended up caring about him by the end of this series.  Rex taking his crew to Vegas for a wrap party was as insane and trippy as you would expect from this series.  Oni Press has confirmed that there will be more Auteur moving forward which makes me one happy camper.  There is nothing else like this in comics and I have nothing bad to say about the series.  Shocking, hilarious, disturbing, and fun.

Stray Bullets #5 - In an odd, but highly entertaining story, David Lapham delivers a surreal fairy tale including the cast of characters he introduced in the first four issues.  While it still has the same feel as the other issues, it was difficult to read at times because the other issues feel so real.  It felt like I was watching a B-movie from 1971.  Definitely enjoyable, but quite the departure from the other issues.

The Wicked + Divine #2 - This stellar title from Image picks up steam this week as the Gods are recovering from the framing of Lucifer for the Judge's death.  Laura offers her assistance to Lucifer as we learn more about her rebirth, Laura's back story, and are introduced to a new formidable foe.  This series is hipster gold and is one of the most unique books I have laid eyes on.