Intricately plotted and imagined story of one girl, split into four parts 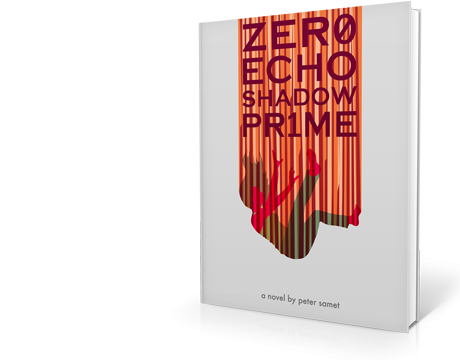 Zero Echo Shadow Prime is the kind of book you hope for when you take a chance on something from a self-published writer. Peter Samet did not set himself an easy task with this near-future sci-fi story, and he delivered in a big way.

The book begins with an Echo waking up under a scrawled mantra on her ceiling that reads "Kill them all or feel withdrawl." Not only does the reader not know what an Echo is at this point, but neither does the character. She has no memory, no idea of who she is, or where, but she has four arms, and realizes this is unusual when she leaves her bedroom and meets three other Echoes, each with their own "gifts" — flamethrowers for hands or bio-luminescent skin, for instance. They are all told that they are descendants of "The Archetype," and they will be expected to battle one another to the death. And when they go outside, they discover millions of other Echos, all in the same boat. But this is not the real world. We're quickly introduced to reality through Charlie Nobunaga, a young tech celebrity who has recently lost her twin sister. To try to keep herself sane, she threw herself into an AI project, and created the first sentient "Shadow." In a clever extension of something like Siri, Samet's future-dwellers have virtual personal assistants called Shadows that can be outfitted to look however the user desires, and Charlie has programmed the first one with actual emotions and the ability to pass a Turing test. But Charlie's got a problem she doesn't want anybody to know about — namely, that she shares the same mutation that caused her sister to develop and quickly succumb to pancreatic cancer, and now the cancer has awakened in Charlie, too.

What's a young, dying tech genius to do? Enter Jude Adler, the CEO of Rivir, a global tech company that has been on the leading edge of Shadow technology. In exchange for Charlie's code, she's willing to give Charlie a brand new start, in a brand new, bio-engineered body. Charlie is appalled at the twin prospects of selling her creation (her only true friend, it turns out, whom she has named "Alan") and having her consciousness mapped into a robot body. But there are larger forces at work that Charlie cannot control, and she's soon swept up in a tide of parental overreach, corporate corruption, anti-technology zealots, and her own (significant) issues.

The set-up is compelling, and the focus on driven, well-rounded female characters in a work of serious science fiction is refreshing, but where the book really excels is in the intricate interweaving of four different plotlines that exist in different realities. It's a deft balancing act that never falters, and helps the book develop a tremendous amount of narrative momentum. It's a thoughtful page-turner with something to say, which is no easy task to pull off. And toward the end, when I began to worry that all of this momentum was just going to barrel forward into a pat "Happy Ending"-style resolution, Samet was able to play one last card that prevented a clean resolution and opened up new possibilities...for a sequel?

Bounses: +1 for a female-centric story where not only did Charlie not need "a man to save her," but where most of her problems were actually created by men trying to save her, and she had to right the ship herself; +1 for the worldbuilding feat of creating multiple, interconnected sci-fi realities; +1 for a believable near-future that sounds both cool and terrifying

Nerd Coefficient: 9/10. Very high quality standout in its category. If you're curious, we don't give a ton of 9's round these parts...