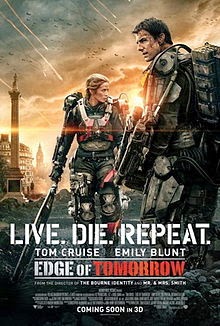 First things first: in real life, Tom Cruise may be mad as a haberdasher, but on screen he still has the magic. So even if you find Tom Cruise disagreeable as an individual (and let's face it, who doesn't?), I'd advise against letting your distaste for his craziness spoil a perfectly good movie!

Second things second: director Doug Liman has combined the humor of Swingers with the frenetic action of The Bourne Identity in this, his newest gem. Because of the relatively unusual (though by no means unique) temporal premise of Edge of Tomorrow (about which I will say as little as possible so as to keep unadulterated the joy of discovery for the six people in the world who haven't already heard it compared to Groundhog Day or Source Code), there were almost limitless options for how to depict the story: in a farcical mode, or a deadly serious action mode, or a Shakespearian tragedy, or a humance (humorous human interest romance). But Liman and the film's other creators have struck just the right balance, in my opinion, between the humantic and the sci fi action extravaganza modes.

As with any project of this scope, some aspects strike specific individuals (notably me) with greater pizzazz than others. Certain elements of the movie's plot, including the enemy's bizarre, almost incomprehensible inability to deal with what seems like the mother of all weaknesses/chinks in its armor, and the handful of cases of "we've managed to throw together a doohicky that can deux the crap out of your machina" sci fi babble, left me scratching my head. But then, if the enemy were truly as omnipotent as they seem, the movie would have been about twenty minutes long, so perhaps I should simply accept the pseudo-scientific exposition of gadgets and whatnot as the price one pays for good entertainment.

And what entertainment! In addition to the intriguing references to World War I (Blunt's character being nicknamed the Angel of Verdun, etc.) there are quite a few laugh out loud moments, and twists worthy of an M. Night Shyamalan movie (but without the crappiness!), even for those of us who (sigh) were told beforehand that Edge of Tomorrow is "just like Groundhog Day but with aliens and stuff" and thus instantly had the ultimate shock surprise of the movie spoiled. And the on-screen eye candy of Tom Cruise and Emily Blunt, as well as the film's deliberate attempt (or so I see it) to prevent audiences from too easily identifying with Cruise's character (who starts and remains kind of unappealing personality-wise), are sure to please.

Even scifobics (up to and including old people!) who get the heebie-jeebies whenever movies contain anything that isn't 'realistic' should enjoy this high-octane romp! (Yes! I've always wanted to use that ridiculous phrase, which is only trotted out for Jason Statham movies under normal circumstances but seems appropriate here.)

So in conclusion, happy birthday, America—and what better way to celebrate than by seeing Edge of Tomorrow?
Baseline assessment: 8/10

Bonuses: +1 for having plenty of humance and +1 for striking a nice balance between laughs and chills

Penalties: -1 for a few instances of sloppy sci fi babble along the lines of "reverse the polarity of the neutron flow" (though nowhere near that bad)

Nerd coefficient: 9/10 "Standout in its category" (admittedly, it's kind of a small sub-category we're talking about here, but for what it's worth, I'd say this movie trumps the excellent Source Code and even rivals the King of Time Loop movies, Groundhog Day itself!)

Zhaoyun, zompire scifantomance fan, has been keeping it real here at Nerds of a Feather since before Edge of Tomorrow was a gleam in its director's eye (or in any case since early 2013).
Posted by Zhaoyun at 12:00:00 AM