Review: The Book of All Skies by Greg Egan

The journey is hard to follow, but the destination is worth it 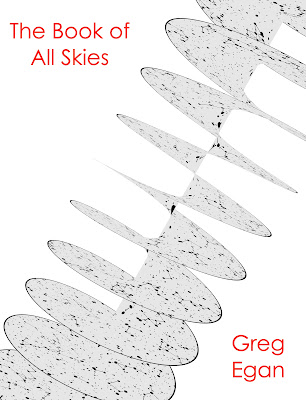 Greg Egan has become my insta-buy author. At times, the scientific underpinnings of his worldbuilding fly over my head, but I can always trust that he's done his homework and that the whole edifice will stand. He writes in that hard SF tradition where the conflict to overcome is not interpersonal disagreement or inner turmoil but a purely technical challenge. As in a Clarke story, the universe is villain enough.

The Book of All Skies occurs in a spatially warped version of our world where two gigantic arches, known as the Hoops, serve as portals to alternate lands with different ecosystems, cultures, languages, and stars. Since this is a world without a sun, its inhabitants live in perpetual night, so they have evolved the ability to see infrared. The only sources of sustenance for living beings are starlight and geothermal energy. The Hoops themselves are not physical objects, but you can always tell where they are because the night sky visible from one side ends abruptly at a boundary where the next sky continues. Now, crucially, if you want to remain in the same land, you can always walk around a Hoop. But if you cross under it to enter the next land, you can turn around and cross it again, and enter yet another land, and repeat the procedure dozens of times. The only way to return to your point of origin is to walk back the exact same trajectory.

(If you're not a topologist and, like me, feel utterly lost, the author has posted a helpful explainer here.)

There's a narrative economy here that results in a constant state of surprise, but this technique may not suit everyone's taste. A line in the first page only makes sense if the reader can infer the mechanism of infrared vision, but otherwise, the reader is left alone. This isn't a novel that hands over explanations. The setting is absolutely alien to our common experience, but it's described from a standpoint of normalcy, which for the reader means waiting several chapters to even learn that this world has no sun, and even more chapters to realize (although it should have been obvious in hindsight) that the protagonists have no concept of years. There are infodumps, but they're restricted to points in dialogue where they're immediately relevant. If you're fine with exposition flowing organically from plot, spoken more for the actual benefit of another character than the reader's, you'll enjoy this style of writing.

The plot follows Del, an archaeologist and linguist who lives in a land at a pre-industrial stage of technological advancement, who has been recruited for an expedition to investigate one mysterious land where the ground gives way to a seemingly endless gap and no one knows whether there's more world beyond. A legend speaks of a great migration in the past, but the only pieces of evidence available are a missing book and a closed passage under the mountains. The process to reach the other side of the gap involves extensive discussions and calculations, because gravity behaves in counterintuitive ways when you cross a Hoop that has a full world on one side and only thin air on the other. No actual numbers appear in the novel (that's what the explainer page is for), although illustrations would have been very helpful. I struggled to picture the specific shape of a gigantic bridge built to cross the gap, or the trajectory of certain buoyant vehicles, or the positions of sections of rock relative to the Hoops, and after intense rereading, I'm still not sure my mental image matches Egan's.

What Del discovers at the end of her journey is not only the secret history of the fabled migration, but also the origin of the Hoops, the tragic explanation for the loss of written records, a completely different technological tradition (a discovery that underscores the relationship between scientific advancement and availability of resources), and rules for social organization she hadn't remotely suspected. However, readers must keep in mind that this is not the type of story that culminates in a big reflection on the deep truths of human life. The ending is resolved by the clever application of physics, and that's where the novel places its ambitions. The adventure in the last couple of chapters proceeds with the mechanical dryness of a Verne novel, and the text ends with unexpected abruptness in the middle of a dialogue. It does complete the thematic interests of the book, in that the ancient separation of humankind is healed, but the manner of execution can come off as ungraceful. Likewise, action scenes early in the book often pause at the strangest moments to describe a character's entire thought process, or even to insert an entire dialogue, full with meticulous strategizing, right at a moment of immediate urgency. Although this helps understand the motivations of a scene, it comes at the cost of hurting the reading flow.

Readers accustomed to a more literary vein of science fiction need to consider the text for what it aims to do and the way it sets about achieving it before jumping to find fault in these writing choices. Egan's interest in exploring strange universes is mathematical first and poetic second. That's a valid way of creating science fiction, one that has historically provided the essential link between speculation and real-life innovation, and one that needs authors like Egan in order to stay fertile.