Well, we survived! Blaseball's first week of Short Circuis has ended with a mere five in-game incinerations, a very calm weather pattern of nights, feedback, flooding and reverb (and some eclipses, of course), and no dramatic league changing events! Sure, we are ticking down to this entire dimension disappearing on us next Sunday, but it's nice to have one week of calm, anticapitalist, mathematically straightforward Blaseball once in a while. 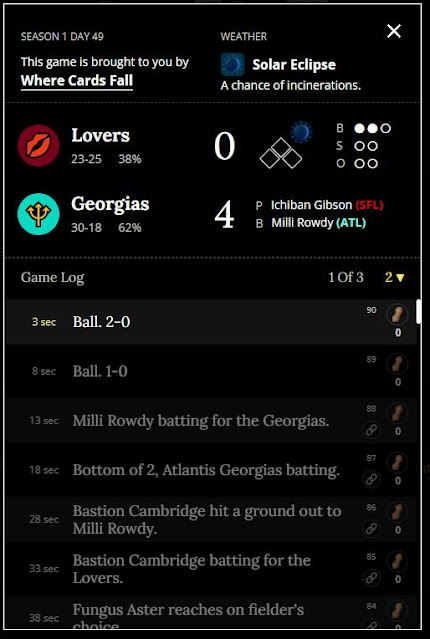 And those games look really nice! This is still a text-based game, but the feed options have had an overhaul and now there's this really nice way to watch an individual game play out (such as the Georgias gently roasting one of our BFF teams, the Lovers). Being in this view makes it harder to see all the games happen at once, but it does make it easier to have one game open in a second window while doing something in the other half of the screen.

The Stakes have never been higher

(That's "stakes" the betting term, not "steaks" the team. Georgias beat the Steaks to the playoffs this time, they have totally been higher)

While the games themselves ditched the complex maths of the Expansion Era, dread Numbers did appear with a vengeance in the overhauled betting system. Previously, Blaseball's voting system was all about earing in-game coins (no real world monetisation involved) to buy votes: the bigger your income, the more votes, and the more influence you could wield over elections. While the game interface nudged players towards betting, the real money was in passive income, buying particular snacks that would pay out every time your "favourite" player hit the ball, or pitched well (or badly), or when people got incinerated (silver lining!). Plus, betting involved checking in on the website every hour and that's not ideal for people with human sleeping cycles.

At the end of the Expansion era, snacks stopped being a thing*, and now betting has become a direct way to get votes. And you can see the schedule and vote several hours in advance! The catch? You can bet on more than one game per Blaseball day (which is one hour in real time), but if you pick multiple games and any of your choices lose, you lose the entire bet for that day. The game lets you know before you place your bet what miniscule odds you have of winning as soon as you go over 2 bets, but the rewards are much juicier for a win that includes 3 or 4 games, so... dilemma!

It's possible to pick a couple of games with decent odds and pick up steady votes, but Blaseball being Blaseball, the fan community is all over the research question of how to make most money. Personally, I've joined my team's "Dutch Betting" group, where we all bet on the same four games each day and cover all the permutations of those games, so at least somebody wins.

Another fun thing about this season, especially if you've been around Blaseball for a while but haven't got into the deep reasons behind why players play like they do, is that "Forbidden Knowledge", the hidden stats that each Blaseball player has, has become totally open on every player's page (previously, anyone could get hold of it but it involved faffing about with items). That makes it way easier to check out the behind-the-scenes stats going on with each player, although interpreting it is another matter (the Wiki helps! And there are sites like the Blaseball Player Viewer which are quite overwhelming but also colour coded)

To show you why this can be fun, let's take a look at the Georgia's Lineup (batting) MVP, Agnes Caster. 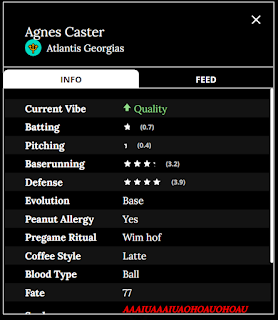 Now, looking at this you probably don't have high hopes for Agnes' scoring abilities. Their defence skills are great and they look like they can run, but 0.7 stars in Batting doesn't look ideal (and this is after a boost at the end of season 1!)

And yet, Agnes - who has been generally interpreted as a tiny mouse, who finds it hard to hit the ball because tiny mice aren't that great at using baseball bats - has actually been an impressive scorer last season. To find out why that is, we have to look at some advanced stats!

They're down here. Keep going... 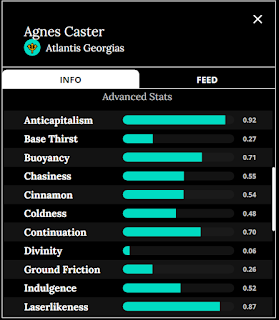 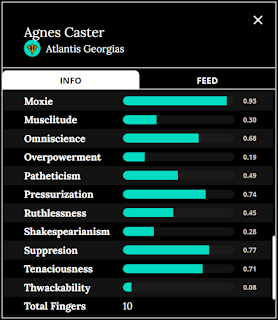 Oh no, this is confusing. And it's not even all of them! As you can see, Agnes has some pretty terrible scores in stuff like "Divinity", "Thwackability" and "Musclitude", and all of those are skills that they need to be able to hit the ball. Divinity, for example, determines how often a player can hit a home run, and Agnes... can't really do that much (tiny mouse, remember?)
What Agnes has in SPADES, though, is a little thing called Moxie. Moxie, for those who know the rules of actual baseball, is the player's "plate discipline": it determines how often a player tries to hit balls that are outside the strike area. Low Moxie means good plate discipline, which means fewer strikes and more balls, and when a Blaseball player gets three balls, they automatically walk to first base!
So, despite being terrible at hitting, Agnes is a great player against mediocre pitchers who pitch outside the strike area a lot. When they go up against those, odds are great that they'll get three balls and walk to first - and then their baserunning skills kick in to take them the rest of the way. Good for you, Agnes!
Which brings us on to:

The Atlantis Georgias are Solid! Like, literally we are solid. Ice cowboys is the fan vibe for this mini-era, and oh boy do we have some entertaining players to go with it.

Because, that Moxie thing? It turns out that Agnes isn't the only player we have who is really good at not hitting the ball. Grant Wyeth, Thurgood Bibi, Agnes Caster, Vanessa Tables and Wes Whirlie all have Moxie over 0.9, and since boosting our lineup's batting skills in the first election, Grant, Vanessa and Wes are now over 1.0.

Put that lineup against a bunch of randomly rolled and distinctly average pitchers, and the Georgias managed to stroll their way into postseason! Our run ended in the semifinals with a 2-1 defeat to the Chicago Firefighters, who then went on to have a grand old time with the Baltimore Crabs in the Internet Series finals, with the Crabs taking the win 3-1. Which is fine, except the Crabs have won enough times and could have let someone else have a go. A fellow water themed team, perhaps? Just saying.

We had a good election too, getting the aforementioned batting boost and also picking up a "distortion" (a nice bonus boost!), giving player Duck Falconer "Ball Blood". This lets Duck walk on one fewer ball, which would be amazing if it had landed on some of those players I mentioned above... but, you know, Duck is fine too. Can't go wrong with a ball blooded Falconer, that's what I always say.

And that's all we have time for today! Join us next Monday for the results of Circuit 1, Season 2, and the results of next week's election, where we'll fling one of our players into the microphone static and see what next Circuit has in store.

*How did they stop being a thing, you ask? Well, we burned them as fuel to allow our fellow teams to travel through space and escape the supermassive black hole (or, in some cases, to fling themselves into it). Obviously.