An SF novel centered around humor, but also characters, relationships, and ultimately heart. 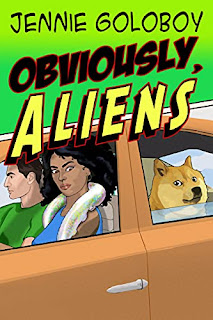 Dana has a problem. When traveling to Spokane to meet a memorabilia company to pitch them an idea for a line of collectibles, she makes the mistake of drinking the wrong can of soda from a can in a rental car. Except the soda isn’t a soda, and now she has someone else in her body. This isn’t even the weirdest thing that Dana has to face, as she is soon plunged into a world of a variety of aliens, government agencies, tech companies with secrets, her past with her famous father, and even more weirdness. Not a great day for someone who just wants to sell her idea for Doges of the Month.

Obviously, Aliens, is the debut novel of Jennie Goloboy.

Humor is a hard thing to pull off in a SF novel, especially as a tentpole. There are precious few writers who have the skill of Douglas Adams or Terry Pratchett. And, really, in this day and age, you need more than just the humor to sustain a narrative .So, Goloboy is certainly brave to make the attempt at a comic SF novel here, even if the novel is backed with a strong set of characters, a strong focus on relationships, and a relatively soft and comfortable storyline.

As it so happened, breaking the fourth wall here, I read a large portion of this book while waiting for Urgent Care for a thumb injury. It turns out a light, fun and breezy SF novel leavened with humor is exactly the kind of thing you want to read in a situation like this. Somehow I think a more serious or complex narrative was not what I was interested in, but this novel? This novel is the SF equivalent of a beach read, something that I could read while in discomfort, and fall for the humor, the characters, the relationships.

Plot is pretty much not the point of a novel like this. We start with Dana, trying to realize her artistic dream, and switch between her and Adam, who loves Jay, who at the beginning of the novel gets inserted into Dana via that “soda can”. A series of adventures plague both as Dana gets pulled into a world that Adam (and Jay) know much more about, but even they don’t quite know how deep the rabbit hole goes. They are aware of one alien, yes, but it emerges there are several sets of aliens on Earth, with varying agendas and plans, and both Adam and Dana get wrapped up in their shenanigans.

Describing humor is relatively hard, I find. How do you convey the sense of humor and fun that this novel has. I can broadly say that it runs to the absurd and situational, rather than more dry or literarily focused. But I think a comparison is in order, and to two movies. Obviously, Aliens, although the author mentions Scarecrow and Mrs King as an inspiration, reminded me of two movies. The first, no surprise, is Men in Black, with a variety of aliens on Earth, trying to get along, and occasionally having their agendas cause problems for others. The other movie is one I happen to like, and my citing of this movie is meant as a compliment, and one I want to discuss in detail. And that movie is Hudson Hawk.

Hudson Hawk, you may have heard, is “not good”. For me, this is far from being true. That it was a box office failure is undeniable. But I recently rewatched it and I saw what the movie tries to do, and for people who accept it, can see and enjoy it.  It’s utterly absurdist, as Bruce Willis’ main character, who just wants a cup of espresso and live his life now out of prison, gets pulled into a plot heist involving Leonardo Da Vinci, the Vatican, quirky and weird egotistical millionaires and a lot of humor all over the place.. It’s a movie that never takes itself seriously, and there is a softness to the movie that makes it perfect to watch if, say, you are sick and want something breezy and fun. Obviously, Aliens felt for me exactly like the literary equivalent of Hudson Hawk in that regard. Dana just wants to make a living (although finding a stable relationship would be nice). Adam and Jay want to make their relationship work, even if there are...challenges given their current states of being. The government agents...they just want to keep things on an even keel. And the aliens, too, all of them, have pretty basic wants and needs, but when they all collide, funny things happen.

The novel also has a lot of heart. It treats its characters, even the ostensible antagonists, rather gently and with love and respect. You will get to know Dana, Adam, Jay, Sophie and the rest and get to know them, road trip style. (If this book were ever turned into an audiobook, this novel would be really fun to listen to on a driving adventure). Sure, the characters go through all sorts of disasters, reversals, and “can you believe THIS?”  but it is a very lighthearted tone. The relationships especially work well. Adam and Jay trying to keep it together. Dana, trying to find someone as her world gets weirder and weirder. The friendships and work relationships as Dana further sinks into this world.

Spoiling a comic SF novel is easy, but I will give a shot at what Dana finds as she plunges into a world that she never knew existed:  Aliens with multiple bodies. Alien ship landings. Mysterious tech companies. Dogs who are really Aliens. Robot duplicates. Strange libertarian communities offshore of San Francisco. What REALLY is underneath Denver Airport. Alien run grocery stores. And a whole lot more. Goloboy puts these elements in the blender and turns it on to high and every chapter brings something new, and funny, to the fore.

On a more serious note, the novel’s writing is excellent. Goloboy knows when to stop pressing a joke, and more importantly, knows when to jump the narrative forward and bring us to the “next bit”. The novel is lean in the sense that we aren’t stuck interminably trying to get to the next funny bit, the narrative fast forwards us to the next interesting scene with vibrant pacing. There is an RPG term for not bogging characters and players in dull stuff, called “Fun, Now.”. The author has applied that philosophy to her novel.  Reading this novel in a waiting room at Urgent Care, I was consistently entertained, and the novel ever flagged, which was crucial in trying to put my mind off my discomfort, my fears of my thumb injury, and the soul-sucking interminability of a hospital waiting room.

But, reader, you don’t need to get a thumb injury in order to enjoy Obviously, Aliens. Do you want a comic SF novel with fun characters, a breezy pace and plot, and a lot of heart tht reads quickly and humorously? Then Goloboy’s step into fiction (and novel length fiction at that) is for you. It’s not a novel that will change your life permanently, no, but to put your mind off of the world for a little while, Obviously, Aliens will keep a smile on your face.  Things could be worse, after all. YOU could drink from the wrong soda can or figure out how to get your boyfriend out of a strange woman’s body, or figure out this weird species called humanity.

Bonuses: +2 for a comic and fun SF novel that kept me entertained and amused and distracted during a painful experience in an unpleasant place.