Far future Earth can have a little divine intervention, as a treat 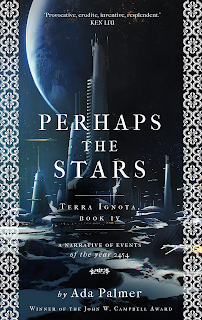 It is a vast duty placed before me, dear reader, to convey the substance of Science Fiction and Fantasy Novels, these vessels of prose encompassing both the fantastic and the mundane, in a way which captures and reflects the essence with which their tenacious authors, with Muses' blessing and Sisyphus' patience, infused their creations. How shall your humble reviewer, fallible and distractible, presume encapsulate texts which, in their own turn, must be but a finite representation of the vast possibilities of the human imagination? This task becomes particularly acute when faced with a text of such length and densitude as Ada Palmer's "Perhaps the Stars", one which demands attention to every small detail and fleeting name which crosses its pages, and which synthesises its cogitations upon the future of our species with elements of both classical history and divine musing, creating a novel whose complexity would make even demiurgic Homer squint upon their poet's throne and go "u wot, mate?"

Or, something like that. Perhaps the Stars is the culmination of Ada Palmer's Terra Ignota series, a four book "record" of events set 450 years in earth's future. The world of Terra Ignota is one where flying cars make it possible to get halfway across the world in a couple of hours; where geographic nations are mostly obsolete and humans have instead organised themselves into "hives" which regulate and shape their members in vastly different ways. Events in our near future and this Earth's comparatively-distant past have led to public displays of both gender and religion taboo: religious needs are dealt with quietly, through a system of counsellors and "reservations", and they/them pronouns are enforced in polite society. This being the fourth book in what is, at its core, a political epic, things have gone disastrously wrong by this point: so wrong, in fact, that humanity has been plunged into its first war in centuries. There's not much point in me going into the factors that led to that war, because if you haven't read the first three books, Perhaps the Stars might as well be written in a lost ancient script for all the sense you're likely to get out of it. What is important to know about this series is that that conflict, and all of its subsequent effects, involve two broad sets of forces. The first is the mish-mash of political, social and ethical questions created by this particular future, with all of its technologies and factions. Almost all of Palmer's characters struggle with the concept of "the greater good", particularly in the context of a war that their recent history has rendered practically unthinkable, and it's this dilemma, and the way that some characters' answers to it are beyond the pale for others (and vice versa) that really drives the events of Perhaps the Stars forward.

The second element is about what happens when humans interact with divinity. Terra Ignota has two on-page divine characters: Bridger, the child of the Saneer-Weeksboth bash' (think big extended chosen family unit), who is able to conduct miracles that bring inanimate objects to life and bend reality to their will, and Jehovah/J.E.D.D Mason, the adopted or actual child of basically all the current world leaders (long story, one of the weirdest aspects of the series) and who is by this point confirmed as a divine visitor being hosted by the Creator of our own universe. These two characters shift the story in particular, unexpected ways (Earth can have little a divine intervention, as a treat), and they also shape and are shaped by the series' primary chronicler: Mycroft Canner, a repentant mass murderer still inexplicably plugged in to global leadership and reverent upholder of the Greco-Roman Classics (and some early modern Europeans). Mycroft's constant invocations to Greek Gods, comparisons to Caesar, in-text dialogues with the ghost of Thomas Hobbes and other narrative quirks take the new Gods in Palmer's universe and weave mythology around them, putting them into the canon in a way that is deliberately archaic but... makes sense. Sort of. If you're up for this sort of thing. The divine influence on the story itself is equal parts maddening and intriguing, turning some problems from intractable to trivial with the snap of a finger (or the use of a magical resurrection potion that a kid drew on paper a few years ago), but also exposing cracks in the logic of human characters and their morality which ultimately helps drive things forward in unexpected, intriguing ways.

Keen eyed readers will note that one of those two factors is a science fiction staple: knotty, far-reaching political problems in future worlds? Sign me up! And one of them is, in 2021, extremely fucking niche. The Terra Ignota series is extremely upfront about that niche-ness - the acknowledgements and authors note of Too Like the Lightning explicitly state that this is a book seeking to join the Great Conversation, positioning itself in a canon with classical and early modern political philosophy - and on a technical level, that absolutely succeeds. There's some weird notes here and there, and the biases Mycroft himself brings into the text take some getting used to (side note: people who noped out of Too Like the Lightning because of its handling of the in-universe Gender Bullshit and are considering retrying it will find that while the series as a whole moves on, there's still a moment where Mycroft's co-chronicler documenting the genitalia (known and presumed) of everyone in high political office in order to prove that people with vaginas can pilot warships too! A moment of pure 25th century #girlboss energy that just... wasn't needed.) but Terra Ignota knows what it's trying to do, and by Zeus it does it. Perhaps the Stars is very long - the UK edition is nearly 600 pages to previous book The Will To Battle's 350, and the text is smaller - but its ups and downs, and the way the chronicle varies depending on who is narrating and what circumstances they find themselves in (for example, there's a deliberately unfinished chapter halfway through which lends a lot of power to the one that follows it), feels really well thought through. The first moves of this future war include individuals cutting off the instantaneous communication and transportation that characters take for granted, deliberately hampering the technologies with which the war is fought, and the story really sells that mildly contrived set of circumstances. An anachronistic narrative meshes with an anachronistic war, and it all just kind of works. Even the writing style, which gets very florid especially in chapter openings, is actually 99% interesting and readable once you're into it.

The question, then, is whether this very technically accomplished and very strange book is going to work for you, dear Reader. To answer that, I need to answer the question "was this technically accomplished and very strange book good for me?" and I have absolutely no idea. Reading this book was a lot of work, an effort that put significant amounts of other reading on hold as I struggled to focus through what it was trying to tell me. The political payoff, and the philosophical questions behind them, were well worth that investment: questions around the value of human life, and sacrifice, and at what cost a "short war" would come, and the trade-off between happiness and ambition, all were presented in a way that I think I'm going to be thinking about for a long time. Did I need that packaged in a classical-early-modern-mishmash with literal Gods and random greek hero reincarnations running around? Probably not, and what really holds me back from loving Perhaps The Stars is the fact that those Gods and classical allegories seem to pull the focus away from developing characters and just letting them breathe. Many characters from earlier in the series, especially the Saneer Weeksbooth bash' members, have vanishingly little screentime in what is, I remind you, a really very long book, and while I understand that part of this was their becoming less relevant to a war that focused on other actors, there's an awful lot of time spent building up the stakes for other characters based on their mythological roles more than any hard-won connection. Divine intervention, and Mycroft's own status as a creature favoured by Gods, also leads to tragedy which I can't forgive Palmer for, taking away a particular character at a moment when I felt they deserved self-actualisation. Mycroft is an interesting character, but I can't think of a more infuriating choice for "the one who gets divine plot armour at everyone else's expense" - and somehow the presence of actual gods here makes that feel even more unfair.

So, as the curtain closes on the War of 2454, I find myself facing another battle: do I recommend this book, and this series? Ultimately, I have to leave the choice to you, dear Reader: do you embark on a journey that takes far future political speculation and mashes it up with European history and philosophy in an unusual, intriguing and very particular way? Does the payoff of a philosophically dense science fiction series sound fun? Because if it does, and you have some time on your hands, and you accept that sometimes the character lists will be convoluted, and the main narrator will be kind of a dick, and untranslated Latin will occasionally appear on the page as if it belongs in a 21st century English novel, then this series is absolutely one to experience. If early modern and Enlightenment thinking intrigue you, and you want to see science fiction take that mode of thinking on, then oh boy do I have the book series for you. Perhaps the Stars is a culmination of a series that, more than most, needs a particular kind of reader: if this is you, you're going to like how this goes.

No, there is no math. I'm not scoring this one out of 10. It's... look... you just have to experience it, and then tell me what you think. (Then subtract 1 from the score for that ridiculous Lean In feminism page.)