We are now participating in the cultural event of Blaseball. 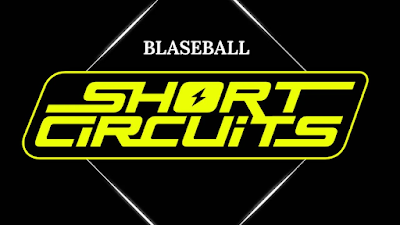 Hello, fellow nerds. This is going to be a post about sports.

This is a post about... SPLORTS. Specifically, about Blaseball.

Those who follow the weird world of online phenomena, and/or the Hugo awards, have probably encountered Blaseball: a text-based baseball game simulator that, through various weird game mechanisms and its overarching cosmic horror narrative, has risen to become much, much more. Blaseball games unfold as strings of text, with sets of whimsically named players on a weird, punny team (we've got the Hades Tigers, the Kansas City Breath Mints and the Canada Moist Talkers, among many others) playing against each other, but beyond those mechanics lie narratives created by both the developers and the players, as players vote to control their teams and the rules of the league, and the creatures in power respond accordingly.

So, at various points in its history, Blaseball has been a spo - a splort where players can occasionally be incinerated by rogue umpires during a solar eclipse; where a vengeful peanut god can encase players in giant shells and force them to play on an evil super-team; where players can disappear "Elsewhere" and come back days, or seasons later, with bits missing; and where becoming too powerful or winning too much can put entire teams at risk of being eaten by shark-like Consumers in the fifth dimension. All of these plot points play out over the course of Blaseball's regular seasons (a season is a week, in our concept of time), and while the narrative is unfolding, so too are fans watching in the hope that they will be that season's champions, nudging them along where the mechanics allow.

So far, the history of Blaseball has taken place in two eras. The Discipline Era, characterised by a high body count, the discovery of necromancy and the fight against the Peanut, lasted from Season 1 to Season 11 and took place in 2020. After that came the Grand Siesta (i.e. several months of hiatus), followed by The Expansion Era! In the Expansion Era, the CEO of Blaseball (a coin) returned and showered us with items and rule changes, all in the name of increasing ratings. This made Blaseball very exciting - who wouldn't want a stadium filled with increasingly weird add ons, like subterranean tunnels and birdhouses and, uh, basketball hoops - but it also made things increasingly confusing and also, in-narrative, caused the league to start sinking into Consumer territory. After numerous twists and turns, the Coin put a new sun in the sky, using it to create more permutations of the scoring system. After several more twists (I'm skipping a lot here, including the entire season where the intervention of a Tarot god caused wins to became losses and the worst teams went to the finals instead) that sun exploded, creating a supermassive black hole which swallowed the entire league. And that, right now, is where the history becomes the present.

Anyway, the Expansion Era is the best because it introduced the most important team in Blaseball:, the Atlantis Georgias (no, be quiet, I'm writing this and your logic does not apply here). The Georgias, along with fellow breach teams The Ohio Worms and the Core Mechanics and returning ascended favourites, the Baltimore Crabs, appeared from a breach between worlds at the tail end of Season 12. Since then they have been a largely mediocre-to-solid presence in the Wild High league, with occasional flashes of being very interesting, like when we used weird items to become very buoyant and discovering a desert at the top of the fifth dimension. Officially, the Georgias players are just lines of randomly generated names: Flattery McKinley, Yurts Buttercup, Rigby Friedrich and Jan Canberra. But to those who follow along on Discord and Twitter, those names have strong (if sometimes diverging) presences: Flattery McKinley is a scientist with an octopus for hair and a tentacle arm, who plays Blaseball alongside her wife Niq Nyong'o. Yurts, depending on which dimension of Atlantis you're in, is either a sentient sea plant inhabiting an old fashioned diving suit, or a whale shark. Jan Canberra is an Australian skeleton pirate, and Rigby Friedrich is a goldfish inside an ice cube (and also one of the strongest players across the league, at the time of the exploding sun anyway). Our team is full of science and lesbians, and while we may not have lifted a trophy yet, we've certainly had some fun along the way.

Also, the Georgias were one of the few teams that didn't get eaten by a Black Hole or seek solace in the arms of the squid god of the underworld at the end of the last era. Instead, we are passing the time in a very nice, safe, not at all creepy vault, with the god of consumerism. We did it for science, and it's fine! Just fine.

Now, the fun continues! Although not with the players we know and love. Having wiped the slate clean of the deliberately confusing rules of the Expansion era, Blaseball is returning today with Short Circuits, a series of two-week league events with the teams facing off against each other with lots of sets of new players. It seems, therefore, like the perfect time to combine my passions of Blaseball punditry and fanzine content creation with this new weekly column, detailing the ins and outs of the league and especially the Atlantis Georgias (although maybe some other teams too. If they win or whatever.)

So our new team has been announced and, well, we're playing in the "Solid Evil" league, which doesn't seem right given that there's also a Liquid league, but we'll accept that. More importantly, let's look at some randomly generated player names!! 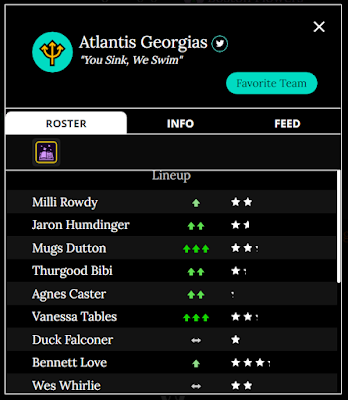 The lineup are the players who will bat for us. This gang don't have the best star count Blaseball has ever seen, especially after the wildly inflated scores of the late Expansion era, but I've got a good feeling about those top three and I'm pretty sure Duck Falconer is going to outplay that single star, with a name like that. 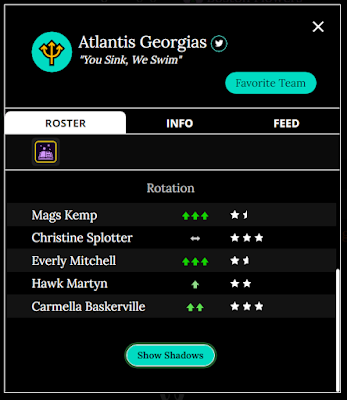 And here's our rotation, the players who will pitch for us! Really strong names, especially Hawk Martyn and Carmella Baskerville, and I guess we'll see how they perform. 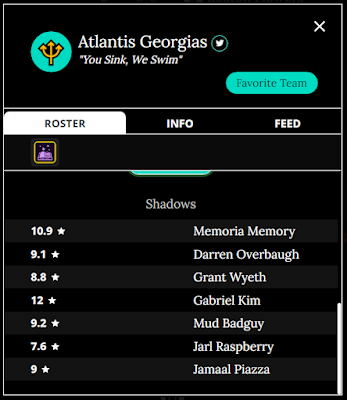 Our shadows might end up substituting in at some point, though under what circumstances we don't know yet. Gabriel Kim has the best stars (they're a pretty solid all-rounder, better at batting than pitching) but I'm more invested in seeing Mud Badguy play, or perhaps Jamaal Piazza.
We've got two weeks with these jokers, which seems like a nice amount of time to get attached to headcanons without getting too deep into lore and tragedy. If you've been thinking about joining Blaseball but haven't taken the plunge, that makes this a really good time to see what all the fuss is about! Go check out the site, dive into the Discord (seriously, it's nowhere near as fun without talking to other fans) and check back here next week to see how the Georgias and those other teams got on in the first Short Circuit season. We Are All Love Blaseball!